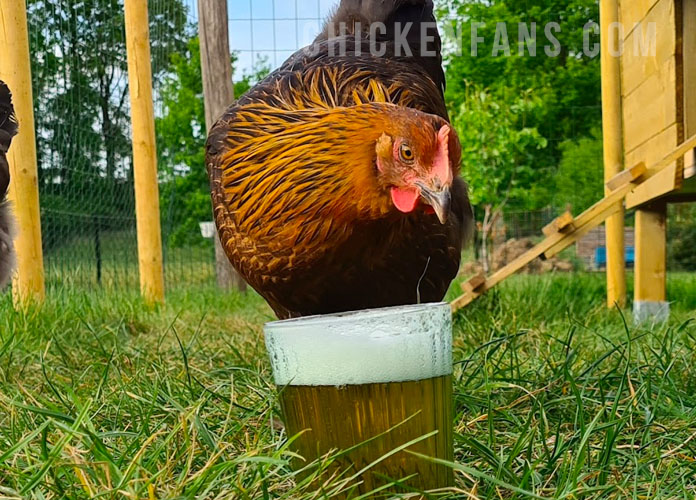 We don't want to be the party poopers here at Chicken Fans. But we all know alcohol, including beer, isn't good for us. Even moderate consumption comes with health risks.

No, chickens can't drink any beer as it contains toxic amounts of alcohol. Even non-alcoholic beers contain too much alcohol and sugar. A few sips already come with health risks, including liver inflammation, heart problems, and several cancers.

In fact, alcoholic beverages are toxic for all animals, including humans. It has long been thought that moderate alcohol consumption comes with health benefits that outweigh the risks. But a global scientific study in 2018 concludes that no amount of alcohol is good for your health.

But exactly how much harm can be done when your chicken sips a few drops of spilled beer? And how safe is non-alcoholic beer? Can chickens get drunk?

We'll tell you all about it!

Beer is one of the most popular drinks globally, after water and tea, and is believed to be as old as human civilization.

Apart from water, it only contains a few basic ingredients:

Yeast is actually a fungus and consists of tiny living cellular microorganisms. These yeasts consume the sugars in the grains and produce ethanol, the chemical compound we call alcohol. The longer this fermentation process goes on, the more alcohol in the beer.

Most beers contain around 4 to 6% alcohol by volume (ABV), although it varies between 0.5% ABV and more than 20% ABV depending on the type of beer.

The grains and hops do not pose any health risk for chickens. However, alcohol and sugar have serious health risks, and too much consumption can be fatal.

How Much Beer can Chickens Drink?

Sipping four tablespoons of heavy beer has a 50% chance of killing a 6.5-pound pullet.

You don't immediately have to panic when your hen takes a sip of your spilled beer. But be aware that some chickens enjoy the taste of beer and won't stop after one sip.

Beer makes your chickens sick, and organs start to fail if they keep on drinking alcohol. Next to the organic failure, drinking alcohol kills the probiotic flora in chickens, causes liver inflammation and heart problems, and increases the risk of developing several cancers.

Several studies have measured the health effects of alcohol ingestion in chickens. That's the unfortunate effect of chickens being used as avian models in alcohol-related studies.

A study in 2021 reports that ingesting 1ml of ethanol a day had severe health implications for chickens. To get a feeling of how much 1ml of ethanol is, let's take a 350 ml glass of beer with an ABV of 5.5%. This glass contains 19.25ml of alcohol, so 1ml is 1/20th of that glass. That's 17.5ml of beer or one big tablespoon.

There were several health effects for the Rhode Island Red and New Hampshire chickens and chicks in the studies:

Physiological studies have shown a variety of health effects, including:

These health effects are already starting to occur after several sips.

No, chickens can not drink low-alcohol, de-alcoholized, or non-alcoholic beer. All of them still contain a small but toxic amount of alcohol. On top of that, non-alcoholic beers are often high in sugar, which is dangerous for chickens due to their insulin resistance.

For de-alcoholized beer (0.5%ABV), it takes about 200ml to trigger the severe health problems described above. Feeding NA beer to your chickens is not a good idea.

Next to the small amount of alcohol, non-alcoholic beers are often high in sugar. Although sugar is not toxic to chickens, it's not good for them either. Chickens are insulin-resistant and continuously have high blood sugar levels as they need to be active all day. Sugar will cause serious health problems, including gastrointestinal issues, gout, diarrhea, and heart damage.

Can chickens get drunk?

Yes. Chickens can get drunk when drinking alcoholic beverages. Depending on their weight and the type of drink, it'll be sooner rather than later.

When breeding chickens for meat, some chicken owners feed their chickens beer (some chickens love the taste!) to get them drunk and sedated enough before slaughter. Besides the sedation part, it is never a good idea to get your chickens drunk, nor is it funny; it's animal abuse.

Not only beer or other alcoholic drinks can get your chickens drunk. If you have fruit trees near the chicken run, be aware that rotten fruit can contain a certain amount of alcohol. Damaged fruit that fell from a tree and is contaminated with yeasts can start a natural fermentation process. It's the same process used to create beer from grains. In rotten grapes, blueberries, cherries, apples, and other fruit, alcohol can accumulate. Even dogs can die from eating rotten apples. And alcohol intoxication in birds is well documented in scientific literature.

You don’t want your chickens to die from alcohol intoxication coming from fermented fruit. Be careful where to place your chicken run or pick up all fallen fruit.

Effects of alcohol on eggs

Does the taste of an egg change after a hen drinks beer? Or will the egg look different?

No. At least not immediately. Nothing happens to the egg until the hen suffers from health problems resulting from alcohol consumption. But in the case of fertilized eggs, alcohol will find its way to the egg, making it sterile, resulting in birth defects or failure to develop.

It's not a good idea to feed your chickens beer or any other alcoholic or non-alcoholic sugary beverage. Chickens can get drunk and will suffer from alcohol consumption. It'll make them sick, cause several health issues, and can even kill them.