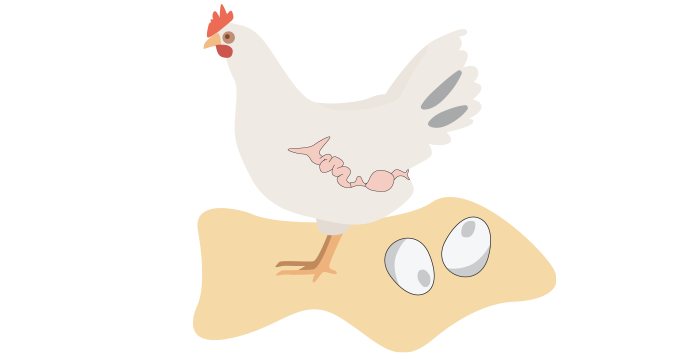 You might have heard somebody bragging about a chicken laying two eggs a day. Or maybe you are wondering why you have more eggs than chickens today. Did you miss an egg yesterday?

Let's find out and ask the million-dollar question.

Can chickens lay 2 eggs in one day?

Yes, chickens can sometimes lay two eggs in one day. It doesn't happen often, but it's more common than it used to be. Normally, it takes 24 hours to build a complete new egg in the chicken's body, but now and then, a quirk in the process can produce a second egg.

To understand how this is possible, we need to know how egg formation works inside a chicken.

Let's have a quick glance at the wonders of nature.

It takes about 24 hours for a laying hen to go from ovulation to laying an egg. The chicken's body has a small factory to build eggs, the oviduct. Every egg goes through the same process one by one.

When a chick is one day old, it already has ten thousand mini eggs in its body, called oocysts. Some of these mini-eggs start to grow into yolks, a few at a time. Every laying hen has multiple yolks ready for egg production all the time.

When a yolk starts it travel to form an egg, it passes a couple of stages:

There is no way to 'speed up' this process. It is just how long it takes. There are no super talented chickens that can build eggs twice as quickly.

So the question remains.

How can a chicken lay two eggs in one day?

There are three possible ways a chicken can lay two eggs within the span of 24 hours:

There is something to say about all three of these scenarios.

Scenario 1: the first egg gets stuck

In the first scenario, the first egg goes through its normal building process but gets stuck in the uterus for multiple hours. This allows the second egg to build and catch up on the first egg.

It's not that uncommon for a hen to postpone the egg-laying. Any stressful situation can cause egg retention.

Stress can occur in multiple situations, for example:

How do you know if you are in this scenario?

Since the first egg gets stuck, there won't be an egg the day before the hen is laying two eggs in a single day. So when you see your chicken is suddenly laying two eggs a day, it's usually after a pause day.

But what if the laying hen did not have a pause day at all? What if she has produced an egg the day before?

Then we come to the second scenario.

Scenario 2: the ovary releases two yolks at the same time

In the second scenario, the ovary is releasing two eggs simultaneously. This starts the complete cycle with two yolks at the same time.

Usually, this results in a double-yolked egg. Double yolks are pretty common, especially with younger hens still maturing their reproductive systems. Their hormones are not completely balanced yet.

But in this case, the uterus builds two complete distinct shells around each yolk, resulting in the formation of two eggs at the same time. This process takes about 20 hours, and somehow these eggs need to stay completely apart without influencing each other. Which is quite striking.

In 2019, Navara K. and Wrobel E. described how there is space enough in the uterus of a White Leghorn to host two eggs in a horizontal position. However, it's still unclear how the two eggs would stay separated in this scenario.

This leaves us with the last possible scenario.

Scenario 3: the second egg catches up on the first egg

The egg formation takes about 24 hours in total. However, there is some variation in the timings of every step in the process. It's not that a chicken has an internal stopwatch, and every egg is produced in exactly the same timebox.

If the first egg is produced at a standard rate and the second yolk is released quickly and goes through the oviduct as a ninja warrior hitting all record times, it might catch up some hours on the first egg. However, Navara K. and Wrobel E. describe this scenario as very unlikely.

For decades, breeders have been selecting the best performing egg-laying hens. Chickens that are genetically predisposed to release two yolks at the same time might have been favored over the others since they are producing more eggs. On the other hand, selective breeding also resulted in fewer abnormal eggs or laying patterns.

Due to obvious commercial interest, the poultry industry is very interested in selecting hens that can repeatedly lay more than one egg a day.

For now, it's still a little bit guessing why more chickens can lay two eggs a day now. It's also terribly difficult to investigate for researchers since double eggs are so infrequent. Navara K. and Wrobel E. described that they would have had to check 195 hens a day for double eggs during the experiment.

A chicken can lay two eggs in a single day. It's not commonplace and certainly doesn't happen every day.

There are no uber chickens or breeds that optimize the egg-building process. It's rather the result of some abnormalities in the manufacturing process.

The most likely scenarios are:

So next time you find an extra egg, you might have stumbled across one of the quirks of mother nature. Just make sure your chickens are not in any stressful situations.