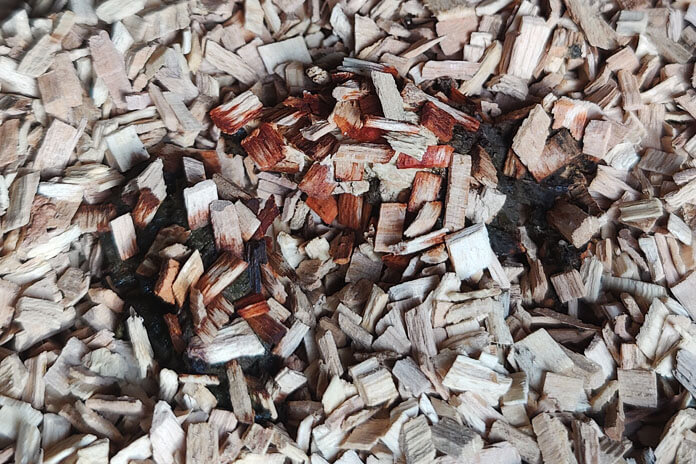 Causes for Blood in Chicken Poop

First of all, it's not uncommon to encounter bloody droppings. But it's not normal either. The blood is always coming from somewhere.

Common reasons why you might see some blood in their droppings:

The first one is a catch-all, and there is a lot of misleading information on the internet.

The real question is what is causing this damage. It can be relatively innocent, such as sharp food, worms, or minor inflammations, but it can also be terrible, like coccidiosis.

Coccidiosis, also called cocci, is a severe disease that's unfortunately not that uncommon. It's a parasitic infection that spreads quickly in the flock. The parasite thrives in the intestines of a chicken and causes internal bleeding.

It's essential to make a correct assessment as coccidiosis can develop quickly and kill your chicken in a matter of days. Some chickens even die before showing any clinical symptoms. When in doubt, check the droppings with a vet.

Apart from coccidiosis, there are other serious causes of bloody stools like algae and bacteria. Algae poisoning can lead to organ failure, which is fatal for your chickens. Necrotic enteritis can cause perforation of the intestines and ultimately lead to death from a septic shock.

Blood in the stool can occur in two forms:

Let's have a closer look at all the causes.

A common reason you will encounter some blood in the chicken's droppings is shed intestinal linings.

In this dropping, you can see some blood from intestinal linings:

Blood should always alert you, but you don't have to panic all of a sudden.

To understand what's going on, let's look at the internal lining first.

What is the intestinal lining in a chicken?

This layer has two functions:

The lining is composed of a layer of columnar epithelial cells.

The inner linings are continuously renewed with new layers inside the chicken's body. It's an ingenious biological system of layers that replenish all the time.

If you zoom in on the intestinal lining, it's composed of small folds (villi) and even smaller bulges (microvilli). These small folds increase the gut's surface and enable much more absorption of healthy nutrients. But this miniature factory is also prone to damage.

Whenever there is an injury to the intestinal lining, the body replaces the cells immediately. The damaged parts find their way out via the chicken's droppings.

On top of the intestinal linings, a slimy layer of mucus protects the sensitive surface. It's the first line of defense against harmful toxins. The mucus layer harbors the large number of bacteria that live in the chicken's guts.

When you see blood in the droppings from intestinal linings, you can notice this slimy mucus. After drying, it can form long strings. A little bit of blood can give them an orange, reddish look.

The mucus layer itself can also be the target of inflammation from bacteria overgrowth. This condition is called pseudomembranous colitis. Such inflammation can result in bloody diarrhea.

Damage to the intestinal linings

When something damages the intestinal lining, this can result in bloody droppings. The damage must be significant since the veins lie some layers behind the surface of the intestines.

The root cause of the damage can be something relatively innocent like eating grit, sharp oyster shells, a change in diet, or stress. But there can be other reasons, like parasites, worms, or viral and bacterial infections.

Some of these can be life-threatening, like coccidiosis and infections.

Coccidiosis is a parasitic infection caused by coccidian protozoa. The parasite survives in the dirt, and chickens get infected by eating contaminated food.

It's highly contagious for the rest of the flock. In a matter of days, chickens can get sick and die.

A prominent symptom of coccidiosis in chickens is blood in their droppings. The blood is usually very liquid and bright.

This blood is the result of severe damage to the intestinal lining. It always comes together with diarrhea since the damaged intestines can no longer absorb water and nutrients from the food.

Other symptoms of coccidiosis are:

When you notice any of these symptoms, contact a vet.

It's pretty easy to diagnose coccidiosis with a fecal flotation test, a routine test to detect worms. You don't have to wait for lab results. If you have a microscope that has a lens with at least a 400x magnification, you can check for coccidiosis yourself.

Treatment with Amprolium is very effective, but starting as soon as possible is best.

If you want to know more, check out our complete guide on coccidiosis, its symptoms, treatments, and a detailed explanation of the life cycle of the exotic parasite that's causing the disease.

Several parasitic worms can invade a chicken. Birds become infected by eating eggs or larvae from the ground or eating intermediate hosts like earthworms. Eggs can survive months in the soil and can be transmitted via clothes and shoes.

If the worms are not enough of a problem, they can also bring other parasitic visitors. These parasites can also damage intestinal linings and cause bloody droppings. For example, cecal worms can bring in a parasite, causing blackhead disease in chickens. In the case of blackhead disease, chickens have rather sulfur-colored droppings due to liver damage.

Algae can produce toxins causing algae poisoning, which can be fatal to chickens. They grow in stagnant water, such as ponds and lakes. Algae can grow and multiply rapidly when it's hot, and there is a lot of sunshine. You can see them floating as green debris on the water. Sometimes you can notice the bacteria with a blueish shine as if there is some oil in the water.

Some bacteria can produce hepatotoxins, poisonous substances that will affect the liver. Ingesting hepatotoxins can lead to organ failure, which is fatal for the chicken. One of the symptoms of poisoning by hepatotoxins is bloody diarrhea or dark droppings.

The symptoms vary depending on the type of toxins involved. Ensure your chickens have clean water and prevent access to ponds or lakes that grow green-blue algae.

Enteritis is inflammation of the intestines of the chicken. As discussed previously, this can cause damage to the intestinal linings and bloody droppings. Necrotic means the inflammation is causing the death of body tissue.

Necrotic enteritis is caused by C. Perfringens bacteria. These bacteria occur naturally in the microbiome of healthy chickens. In specific circumstances, they can start to multiply and produce toxins.

These toxins can rupture blood vessels (hemorrhage) and perforate the intestines, resulting in blood in the chicken's droppings.

Some risk factors that can trigger the bacteria to become malignant are:

Occasionally you might encounter a chicken that has a bleeding vent. An injured vent can also cause blood in the droppings.

Some common causes are:

If the blood results from damage near the vent, it will be bright at first. It can turn darker when it dries in the air or when the bedding absorbs it.

Newcastle Disease is one of the most common diseases in chickens worldwide. In some countries, it's phased out, but in many other countries around the globe, it's causing regular outbreaks and depopulating flocks.

The disease is caused by a virus, and there is no treatment yet. Although there are vaccines available, they did not successfully eradicate the widespread disease yet.

There are multiple strains of the virus, and some virulent strains attack a chicken's digestive system. This typically provokes green, watery diarrhea with potential blood from internal bleeding. This will usually come along with other symptoms, like gasping, coughing, stumbling, and strange head positions. However, some chickens only show mild signs of general illness.

Virulent strains of the virus will often result in sudden death, even before you notice any clinical symptoms.

Newcastle Disease is a notifiable disease. If you want to know more, read our in-depth discussion of Newcastle Disease with everything you need to know about the symptoms, treatment, vaccination, reportability, and its uses in the fight against cancer and COVID-19.

Although this is a long list of possible causes, it's not an exhaustive list. There are always other, less common, problems that can lead to damaged intestines or blood in the droppings. If you find your chickens having green or yellow diarrhea mixed with blood, there could be a severe bacterial infection or co-occurrence of another disease.

However, you don't have to immediately think of cancerous tumor growth or an exotic parasite. Whenever you are in doubt, contact a veterinarian. It's better to be safe than sorry.

If you see some blood in chicken poop, don't panic. It's not that uncommon to see some reddish in the droppings. Maybe it's just a blood vessel burst or some change in diet.

You should be worried if:

Never rely on the internet for a correct diagnosis. Contact a veterinarian whenever you notice a behavior change.

If you want to read more about chicken health problems, symptoms, and diseases, check out our 'Health Page'. You'll find a 'Symptom Checker', a complete list of 'Chicken Behavior', and an overlook of the most common 'Chicken Diseases'.

Or go to 'The Classroom' and find a comprehensive list of all Chicken Fans articles.