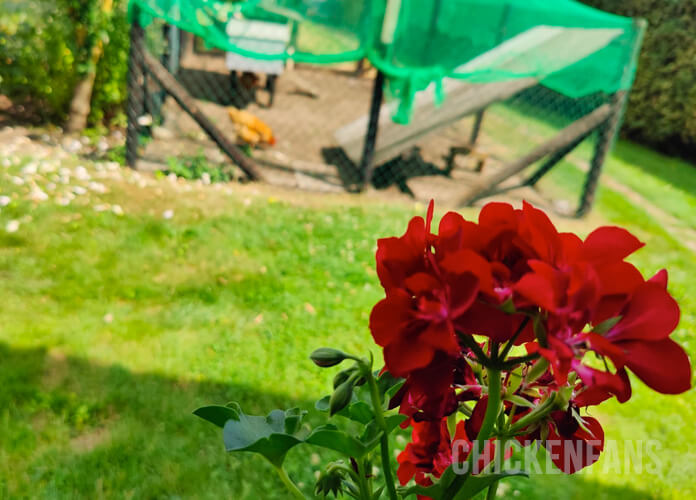 Geraniums are popular flowers in many gardens. However, geraniums are toxic to cats, dogs, and livestock. At the same time, geranium extract is used as an essential oil in the poultry industry.

This raises some questions, are geraniums safe for chickens? Let's see.

Chickens can eat all 422 types of geraniums, albeit in moderation, as they contain oils that are slightly toxic to birds and can cause gastrointestinal upset. Geranium oil is actively researched for its antibacterial properties to promote egg laying and growth performance in broiler chickens.

Health Benefits of Geraniums for Chickens

Geraniums have been used for a long time to fight a wide range of health conditions in humans. Native Americans used it to cure diarrhea and open wounds. Egyptians used it to promote radiant skins. It's a medicinal plant that was voted herb of the year in 2006.

The essential oils distilled from the leaves are popular in aroma therapy, skincare, and several dietary supplements. Geraniums have antioxidant, antibacterial, and anti-inflammatory properties.

Some health benefits from geraniums, both in humans and chickens:

But apart from the health benefits, it's also known to be toxic for livestock and poultry.

Are Geraniums Toxic for Chickens?

Geraniums are considered mildly toxic for chickens and are toxic to cats, dogs, cattle, and livestock. The herb contains linalool and geraniol, essential oils that can cause gastrointestinal upset and skin irritation in chickens. All parts of the plant contain these toxic substances and increase the risk of geranium poisoning.

People happen to confuse geraniums with pelargoniums all the time, which look very similar and were originally also called geraniums. However, pelargoniums contain the same toxic substances.

Geraniol is the primary active chemical in citronella and rose oil. It can irritate the skin, eyes, and internals of the chicken.

Linalool is terpene alcohol used as a scent in shampoo and as an insecticide against fleas, moths, and cockroaches. It can cause irritation, pain, and allergic reactions in chickens. About seven percent of people patch tested in a European study for fragrance markers happened to be allergic to linalool.

Effect on the chicken's body

Several people will tell you their chickens have been eating geraniums without showing any signs of illness. Geraniums are by no means so poisonous that your birds will suffer from sudden death.

However, be aware that the oils in geraniums do affect the chicken's body. The active oils can also interfere with the medication your chickens are taking.

Impact of Geraniums on Egg Laying

With policymakers worldwide limiting the supplementation of in-feed antibiotics as growth promotors, researchers are searching for alternatives. Some research has been done on essential oils extracted from geraniums to determine whether they can improve egg quality and laying performance.

Korean researchers added an extract from Japanese geraniums to the drinking water of Hy-Line Brown chickens for a month.

The results were remarkable:

However, the research is still very anecdotic, and a similar study with germanium biotite could not find an increase in egg production.

Effect of Geraniums on Chicken Growth

One of the biggest problems in poultry is necrotic enteritis, an intestinal disease that targets young broiler chickens. The condition is caused by an overgrowth of Clostridium perfringens, a bacterium in the guts. It usually happens to juvenile broilers in the first weeks of their life. Many chicks can't survive an infection, and the disease caused about USD 6 billion annual loss in the poultry industry in 2020.

With in-feed antibiotic supplementation being off the market, these bacteria enjoy their newly earned freedom and thrive in poultry farms worldwide.

If you have some geraniums near the chicken coop, you might want to use them in the fight against the red poultry mite. Researchers are investigating the use of geranium oils as a botanical pesticide against the red mites, an ectoparasitic pest for laying hens.

Chickens can eat geraniums in moderation. Geraniums are medicinal plants with bioactive compounds that have several health benefits but also contain toxic compounds. Although Geraniums are not as toxic to chickens as to dogs, cats, or livestock, they are still mildly poisonous and can cause gastrointestinal upset and skin irritation in chickens.

Essential oils extracted from geraniums are actively researched as an alternative to antibiotics in poultry. There are some promising results for egg quality and egg-laying performance. It can also be used to prevent necrotic enteritis, a disease that targets juvenile broilers on poultry farms.

If you want to learn more about chicken feed, please consult our 'Chicken Food Page' to go and see every specific food article we address, including all articles on what chickens can and can not eat. Or go to our listicle food summary on 'The Classroom'.