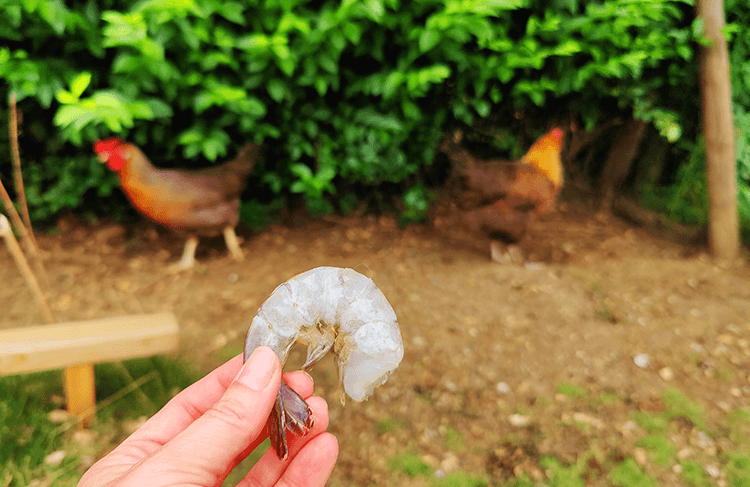 Chickens love shrimps and will fight for them. But how healthy is it to feed them shrimp? Should you consider it as an occasional treat?

Yes, chickens can eat shrimp. It's a healthy food source that fits well into a chicken's balanced diet. Shrimp waste meal is also beneficial but abundance might have a detrimental effect on egg-laying performance and growth. Shrimp meal actively replaces soybeans as a protein source in some poultry feed.

Chickens can eat all parts of the shrimp, the inside, outside, shell, and tail. Shrimp meal comes from air-dried shrimp waste and is actively researched as an alternative food source in areas surrounding the shrimp industry in Central America.

Shrimp is very low in calories and consists almost entirely of protein mixed with several essential micronutrients. Three ounces (85gr) of shrimp only bring about 84 calories to the table.

Proteins are important for chickens since they are essential for muscle growth and cell repair. They play a vital role in several biochemical reactions in the body.

The other calories come from healthy fats. Shrimp is a source of omega-3 fatty acids that can give the birds a health boost. And although shrimps are high in cholesterol, they don't contain many saturated fats.

Shrimps come with 9 different vitamins, minerals, and beneficial antioxidants. This includes Iodine, an essential mineral for the thyroid gland to produce hormones. It's also a great source of vitamin B6, selenium, phosphorus, and niacin (a B-vitamin).

There is no link between the cholesterol we eat and the risk of heart disease.

For years, people believed that high cholesterol intake caused heart diseases. Multiple studies on cholesterol and lipoproteins, the cholesterol carriers in the blood, have proven this is not the case.

Multiple studies investigate the potential of shrimp meat as a partial replacement for other protein sources in poultry feed. With the expansion of the shrimp industry in Central America, shrimp farms are looking for ways to repurpose their waste. A lot of shrimp heads and exoskeletons are lost during shrimp processing.

Not all protein sources are equal, and you can't just swap protein for protein. If you look at a protein, it's a chain of amino acids. The chicken's body digests proteins and uses these amino acids. So it's the amino acids that are of interest. Soybeans don't have the same amino acid profile as shrimps.

Soybean amino acids are plant-based and highly digestible. The excellent amino acid profile is one of the main reasons soy is a popular protein source. Soy is high in lysine, an amino acid that plays a vital role in growth, muscle building, and fat metabolism. As a result, soybean meals are regularly used as poultry's sole supplemental protein source. Regular poultry feed provides around 80% of the dietary amino acids.

Shrimp is a complete protein food that contains all 20 essential amino acids your birds need. However, the proteins come in a different composition than soybeans. Shrimps are high in glutamic acid, essential for muscle building and neurological messages that travel along the spine. Apart from glutamic acid, shrimps also contain a lot of aspartic acid and lysine, like soy.

The main question is whether this difference in amino acid profile influences the egg-laying and muscle-building of chickens. Some scientists believe animal-based amino acid profiles are beneficial compared to plant-based.

But what about shrimp and chickens?

The impact on egg-laying hens is not conclusive on all levels of research. However, there are some notable effects.

All researchers agree that egg yolk pigmentation increases when they substitute soybeans for shrimp. The dark color varies with the amount of shrimp in the diet. In one experiment, shrimp meal replaced up to 80% of the soybean, and egg yolk color jumped one to five units on the Roche yolk color fan scale.

In an experiment with White Leghorns, researchers found that the food intake increased significantly when more than half of the diet consisted of shrimp meals.

Some researchers report that replacing up to 80% of the diet with shrimp meal did not significantly affect egg production, weight, specific gravities, or mortality rates. They conclude that shrimp can be used to replace high levels of soybean in layer hens without any detrimental effects on layer performance.

Effect of Shrimp Diet on Growth

They found that the lower-quality shrimp waste diet decreases body weight, feed intake, and feed efficiency. However, the effect only started when shrimp intake exceeded 8% of the daily meal. They suggest replacing only as much as 4% of the protein intake with shrimp waste is safe for broilers.

In 2018, researchers took it one step further and started feeding chickens with formic acid-treated shrimp meal. Formic acid is used as a preservative in food.

Research on a flock with 56 Leghorns for a month revealed no changes in the egg quality. Chickens that got extra proteins on their daily feed had darker egg yolks, both with soybean or shrimp meal.

According to the report, the darker egg yolks may be due to the increased level of astaxanthin in the chicken's shrimp diet.

These promising results show that shrimp meal can be an extra source of protein and calcium in a laying hen's diet.

How to serve shrimps to your flock

Chickens love shrimps and will usually fight for every last bit. They prefer the full deal, whether they are cooked or raw. But they will also happily eat fresh or dried shrimp tails and shrimp shells. Some farmer feed also has dried shrimp protein in it.

Just make sure the shrimp are not fried, seasoned, or floating in butter or oil. Also, ensure you don't feed them with any garlic or onions.

It also doesn't matter if the box says Whiteleg Shrimp, Giant Tiger Prawn, Pink Shrimp, or Brown shrimp. They all belong to the same Crustacean family of shrimps.

Chickens can eat shrimp, and it's a healthy food source. It's low in calories, high in protein, and comes with a lot of vitamins, minerals, and antioxidants.

Shrimp waste meal is actively used as a protein supplement in poultry food as an alternative to soybean meal. Research is inconclusive on the effects on egg-laying and growth. However, it is clear that adding shrimp supplementation to the diet is safe and comes with several health benefits. The amino acid profile of shrimp feed contains all the essential amino acids.

Recent research with preservatives is promising and suggests many beneficial health effects. One thing is sure, if you provide the flock with shrimp, the eggs will be darker.

You serve the shrimps in any form and chickens will happily chase them. However, never give them fried food, seasoned food, butter, or anything with garlic or onions.