Do Chickens have knees? 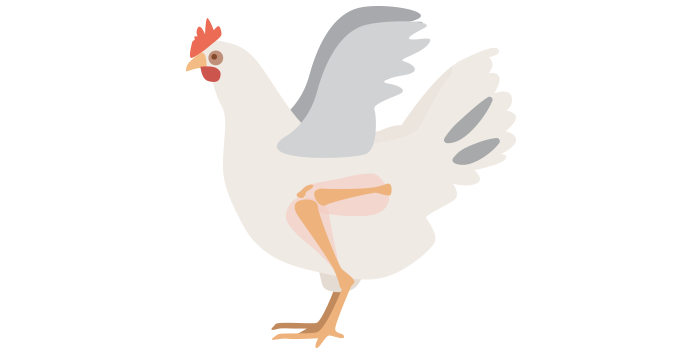 It looks like chickens are just walking on chopsticks. And looking at other birds, it seems their knees are bending backward. So, how are chickens moving, jumping, and roosting?

Do Chickens Have Knees?

Anatomically, the chicken's leg has roughly the same body parts as ours:

Most people think the knee is where they see the legs of the chicken bend. But that's actually the ankle and the heel.

The joint between the tibia (shinbone) and the femur (tight) is the real knee of a chicken. When you go all the way to the end of the thigh, the femur ends in the chicken's hip.

You might hear people saying their chickens lost a foot due to toe injuries or frostbite. These chickens actually lost their toes. Sometimes they will learn to walk on their 'real feet' by using their ankles and knees to hop around.

In the end, the skeleton of a chicken's leg is quite similar to our legs. The main difference is that the chicken's legs aren't as straight as ours and covered in feathers.

The fact that a chicken has ankles bending backward and knees bending forward gives them a lot of stability. They can balance exceptionally well on their legs. When chickens are roosting, they sit on roosting bars, keeping themselves balanced. Sleeping on a small bar might seem magical as they pretend to be sitting on chopsticks. But the truth is that they are just hiding most of their legs and muscles under their feathers.

Connected from thigh to toe

The muscles that connect all parts of the legs form a complete system altogether. When a chicken sits, the ankle and knee joints are bent, automatically closing the bird's toes. This mechanism is less pronounced in chickens compared to other birds. Chickens are no parrots that can swing upside down with a death grip.

Do Chickens have Kneecaps?

Yes, chickens have kneecaps, also called patellas. The kneecap sits on top of the chicken's knee, connected with tendons to their tibia (shinbone) and femur (thigh). Their kneecap increases the chicken's power when extending their legs to jump.

The power boost comes from the lever effect. By having the tendons connected to the kneecaps, the angle increases along with the leverage. The thighs of chickens consist of multiple muscle groups but roughly correspond to our human quadriceps.

In Asia, you find places where you can order chicken kneecaps from the menu. It's not that they are preparing tiny bones to eat, but they prepare the articular cartilage that's connected to the lower legs and thigh.

Most people won't eat these parts of a chicken, but chefs are turning them into crispy fried nuggets in Asia.

Is a chicken's knee the same as our elbow?

What are the differences between chicken's knees and human knees?

The chicken's knees are surprisingly similar compared to human knees.

But they are birds, after all, so there are some differences:

Of course, there are plenty of other minor differences, but in the end, the hind limbs of a chicken aren't that different from ours. The main difference is that humans have some extra features for stability and freedom of the knees to enable us to walk upright.

Chickens have fully functional knees and kneecaps, just like humans. Most people confuse chicken's knees and ankles as their knees are hidden behind their feathers. The visible joints are their ankles, and chickens are actually walking on their toes all the time.