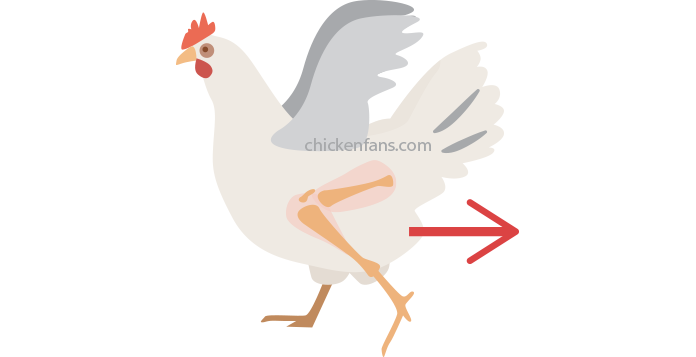 Chickens seem to be walking on chopsticks. Like most birds, you never see them walking backward. So can they walk backward?

Yes, chickens can walk backward. They have ankles and knees hidden under their feathers that allow for backward motion. However, they rarely do it, and if you ever see them walking backward, they might be suffering from a severe condition.

Birds are just not really efficient in walking backward. Most birds will hop back, but chickens can take complete steps to slide backward.

However, if you ever find one of your hens showing off with a moonwalk in the run, they might be suffering from vitamin deficiency or severe illness.

How do chickens walk backward?

It might seem that a chicken's legs are bending backward. But anatomically speaking, they walk on their tiptoes. What you are seeing is the chicken's ankle. The chicken's knee hides behind the plumage.

The chicken's hind limbs have plenty of muscle to move the bones in a backward motion. You know how large the muscles can get if you've ever eaten a drumstick. Chickens use it for jumping and walking. Forward and backward.

Actually, their legs are pretty similar to ours with some minor differences:

However, these changes do not prevent them from walking backward. They even have thick thighs that are similar to our quadriceps. These muscles work as hip flexors and are fully functional knee extensors needed for walking backward.

Why do chickens rarely walk backward?

You might see your chicken taking a few steps back when they notice a worm underneath them while scratching the soil. But other than that, they walk forward.

They don't have to walk in reverse, and they are not proficient in it either. Thousands of years of evolution from dinosaur to backyard chicken has optimized every muscle and bone to walk forward. It's just easier to turn around and go the other way.

When chickens are fighting, you might see one of them take a few steps back. But they will never run backward. After all, why would you run backward if you can fly? And let's be honest, we aren't that skilled in walking back on our heels either.

That said, you might find your chickens suddenly taking giant steps backward for considerable distances. Although this might look funny, it's a clinical sign that something is seriously wrong.

Why does my chicken walk backward?

When a chicken is walking backward, this indicates brain damage or a neurological disorder.

Conditions that can provoke chickens into walking backward are:

In case you are wondering what happened with the chicken in the video. In a follow-up video, Eva-Marie Allen explained the bird did recover from a vitamin and selenium deficiency by adding tuna to the chicken's diet.

If your chicken is walking backward, contact a veterinarian.

No, chickens can not fly backward. They are not the most proficient flyers, and they are certainly not hummingbirds that can fly backward and upside-down. The closest they come to flying in reverse is walking backward while flapping their wings.

Chickens can walk backward without any problem. They have ankles, knees, and muscles to do so. They just don't do it often. Only when they need to step back in a fight or when scratching the soil.

Contact a veterinarian when you notice a chicken walking backward for more considerable distances, as this is a symptom of brain damage or a neurological disorder.