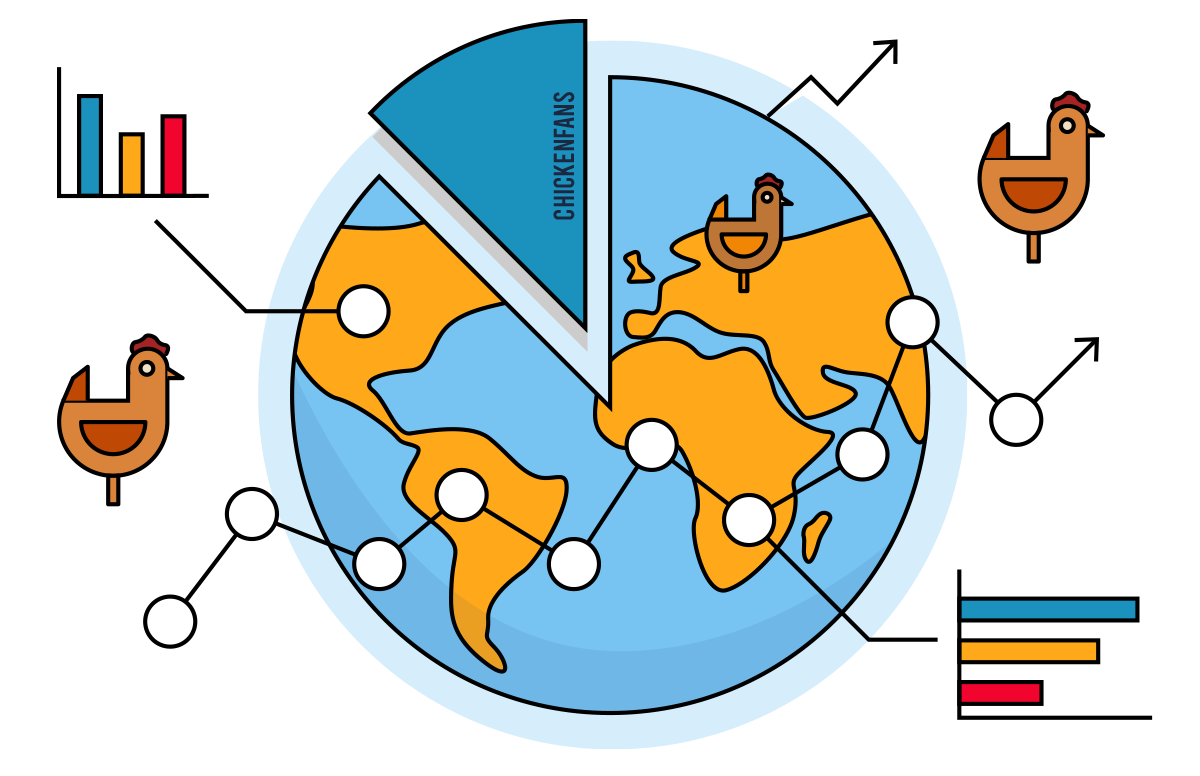 Chickens are the most abundant and widespread domestic livestock in the world. The total number of chickens worldwide has tripled since 1990, from 10.6 billion birds to over 34.4 billion in 2022.

The spectacular growth results from the rising global demand for eggs and meat. Unfortunately, this all comes with a price. Chickens are the most abused animals on the planet. Chickens in the poultry industry have short lifecycles and high feed conversion ratios, and there is much to discuss regarding animal welfare.

The coronavirus pandemic has further accelerated the popularity of backyard poultry since 2020. Backyard chickens are ideal for animal companionship and provide an environmentally sustainable way of getting fresh eggs and food.

Here is a summary of what you'll learn in this statistical roundup:

Evolution of the worldwide chicken population

Here is the table of the number of chickens worldwide every five years:

The global coronavirus pandemic in 2020 affected 7.79 billion people and made backyard chickens increasingly popular. Before the pandemic, roughly 8% of US households had chickens in the US, which accounted for 10 million backyard flocks.

With backyard poultry on the upswing all over, backyard chicken flocks are estimated to be increased by half as much since 2018 despite a global bird flu crisis.

Currently, there are approximately 34.4 billion chickens in the world.

According to the Food and Agriculture Organization of the United Nations, the US has more chickens than any other country, with the last official count of 9.22 billion chickens in 2020.

The combined chicken population located in the top 3 exceeds half of the global population, with 18 billion chickens found in Indonesia, China, and the US.

Here's the table of the ten countries with the most chickens, ranked by the number of chickens:

Top 10 chicken states in the US

Ohio and Indiana are competing neck-to-neck for the second place, with just over 45 million chickens in 2021, according to the United States Department of Agriculture.

In October 2022, USDA reported that 373 million chickens in the US are laying hens. That's more than the entire chicken population of France.

According to the Food and Agriculture Organization of the United Nations, France has more chickens than any other European country, with the last official count of 242.015 million chickens in 2020.

France has roughly half of the Russian chicken population, which is - geographically - also part of Europe. The Russian Federation houses 496.96 million chickens.

The poultry industry in Ukraine was heavily disrupted when Russia invaded Ukraine on 24 February 2022. With Ukraine also a major wheat, sunflower, corn, and soy producer, this disruption is felt in many other European countries, the Middle East, and North Africa. Poultry production plummeted after major power cuts hit the breadbasket of Europe.

Here's the table of the ten countries in Europe with the most chickens, ranked by the number of chickens in 2020:

Norway finishes in the top ten with its cold climate and tough winters. Cold-hardy chickens are also kept in other frigid climates like Finland (8.5 million) and Sweden (10.8 million). Even Iceland houses 222 thousand of chickens.

Almost half of the world's chicken population is located in Asian countries.

Here's the table of the ten countries in Asia with the most chickens, ranked by the number of chickens:

Africa has a total of 2.07 billion chickens.

Here's the table of the ten countries in Africa with the most chickens, ranked by the number of chickens:

Senegal has the eighth spot with a scorching climate. Many chicken breeds are heat-hardy and can survive in the hottest climates in Mali (5.2 million chickens) and Burkina Faso (3.98 million chickens).

Number of chickens in Oceania

There are 139.15 million chickens in Oceania.

Most chickens are located in Australia and New Zeeland:

About 46% of all chickens in the world are located in Asia.

Here's the table of the number of chickens per continent:

For Oceanea, most chickens are located in Australia and New Zeeland:

Where there are humans, there are chickens. The distribution of chickens closely follows that of the human population.

Regions with densely populated chicken populations have a major environmental impact and play a role in epidemic outbreaks and public health.

Here is a table with the highest chicken concentrations in the world:

Chickens are sparsely distributed in the central and western states of the United States but densely populated on the East Coast.

Number of Chickens Slaughtered per Country

Many broilers and laying hens die daily to provide meat and table eggs.

Male chicks are usually slaughtered on their first day in the poultry industry. They are less suitable for meat production than broiler breeds and can't lay eggs*.

Sustainable egg farms like Kipster are rising, keeping roosters alive and raising them for meat. Kipster will open its first US layer farm in Indiana in January 2023.

Here is a table of slaughtered chickens per country for countries that killed more than 1 billion chickens in 2021:

* Note that it is difficult to validate whether all countries included spent hens and roosters in their slaughter statistics reported to FAO.

The number of chickens slaughtered has been rising since the sixties and is now tenfold of the 6.58 billion chickens in 1960.

In 2022, many chickens died due to the highly pathogenic avian influenza outbreak. These numbers will add to the chickens that died, were destroyed, or disappeared for any reason apart from being sold for a few cents per pound.

It will be interesting to see whether slaughter rates have passed the peak in 2020 and will decrease now the FDA has approved the first human food made using animal cell culture technology in November 2022.