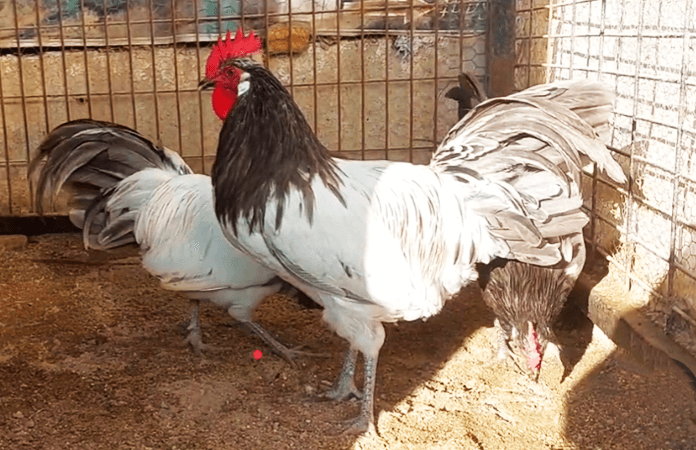 The Lakenvelder chicken is a great-looking black and white chicken of German and Dutch descent. Not only do they have a fascinating history, but they're also good layers and can be kept as a dual-purpose breed. Let's find out everything there is to know about this fantastic chicken.

Lakenvelders are stunning-looking chickens with striking black and white plumage. They have a black head, neck, and tail feathering. Their bodies are white, and all chickens have a pale grey under color. You need a bit of patience to watch these birds in their beautiful plumage colors; it usually takes up to the third molt before they show their true colors. So Lakenvelder chicks will have a more gradient color than their adult counterparts.

They are medium-sized chickens, roosters weigh around 5 pounds (2.3 kg), and hens tip the scale at 4 pounds (1.8 kg). Lakenvelders have an upright stand, and they have a rounded chest. Their single comb, wattles, and earlobes are red, and their skin is white. Their legs and toes are slate-blue and unfeathered. There is also a bantam version available of this breed.

There is some confusion or uncertainty about where the Lakenvelder originates, although it's believed to originate in Germany and Holland. The first documentation of this breed was found in 1727 in Holland, written by a Dutch painter. He documented the breed was found in Lakervelt, a hamlet in the Province of Utrecht, Holland. Because of the township's name, it's believed the Lakenvelder originated here, although this remains uncertain.

Another theory about its origin is found in Nordrein-Westfalen, Germany. A mutation of the German breed Westfälischer Totleger, or Deathlayer chicken, occurred and was selectively bred by local breeders. These black and white beauties were shown in a poultry show in Germany in 1835 and came to be known as Lakenvelders, although in German, the name is written with an 'f': Lakenfelder.

It took until the 1900s to arrive in the USA and was introduced in the UK around that same time. The breed was admitted to the Standard of Perfection of the American Poultry Association in 1939.

After the emergence of hybrid chickens, the public lost interest in the Lakenvelder as an egg-laying breed. Today, the Lakenvelder is mainly kept as a show bird or ornamental bird, although they still lay a decent amount of eggs. The breed remains quite popular in Germany and neighboring countries.

Lakenvelders are ok egg layers, not the best, not the worst. They're mainly kept as show birds or ornamental chickens but still lay between 150 and 200 eggs yearly. All eggs are white to cream-colored and medium-sized. The average weight of one Lakenvelder egg is around 1.7 oz (50 grams).

Lakenvelders are not the hardiest winter chickens, so they'll decrease their egg production significantly during winter.

The breed is not known to go broody; it seldom happens. This means that they won't stop egg production frequently due to broodiness. But it's something to remember if you're planning to hatch eggs, as they are not good sitters.

If there is one thing about the Lakenvelder, you must remember that the breed does not like to be kept in captivity. They are active birds, great foragers, and want to free-range. If you don't have the space or opportunity to free-range your chickens, the Lakenvelder is not the best choice for you.

If you keep Lakenvelder chickens in captivity, they won't be happy and will try to escape the run frequently. This gives them the reputation of being flighty, but they're just really active birds.

Lakenvelders are often high in the pecking order. They're friendly birds but have a dominant nature and can get quite assertive towards less dominant breeds. It's best to keep Lakenvelder chickens with their own breed or with other friendly but assertive chickens like Rhode Island Reds or Wyandottes.

The breed is not too fond of cold weather, so keeping them in an environment with harsh winters is not the best idea. You'll need to keep them inside a heated coop during extreme weather. But overall, they're a hardy breed that can be kept in most climates except extreme cold ones. They don't need much extra care except for food, water, and shelter and are easy to take care of.

Lakenvelder chickens are rare, although they're more common in Germany and the Netherlands, where they originate. Their beautiful black and white plumage give them a striking look. The breed is friendly but active. They are excellent foragers and love to free-range. If you don't have the space to keep a Lakenvelder, this is not the breed for you, as they don't like to be kept inside an enclosed run.

They're not the best egg layers, but they still give you around 150 - 200 eggs yearly, which is a decent amount. All eggs are medium-sized and white to cream-colored.

To learn more about chicken breeds, check out our 'Chicken Breeds Page' to see every specific breed we address. Or go to our listicle breed summary on 'The Classroom', or, if you're unsure where to start, take a look at our 'Chicken Breeds: Ultimate Beginners Guide'.'.