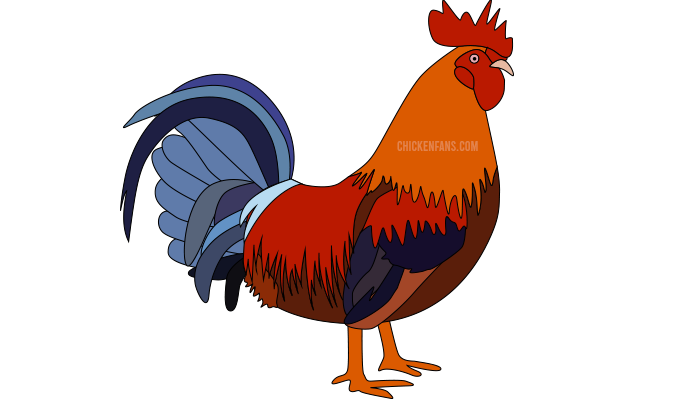 Chicken plumage consists of several feather groups that cover the bird's body. These feather groups all have very specific names, which can be overwhelming if you are new to chickens.

We discuss the feathers of the hackles, saddle, tail, wings, and legs. Especially the wings have a complex feather structure. We also discuss more exotic topics like soft-feathered plumage, Eclipse Molt, and Henny Feathering.

Chicken feathers come in several patterns, colors, and arrangements. The structure may seem random, but it is actually very well organized.

The feathers grow in feather tracts on the skin and form groups and overlapping rows.

The main feather groups in a chicken plumage are:

Chickens change their plumage during the molt.

The hackles of a chicken are the long feathers on the side and back of the neck. Roosters raise their majestic hackles when ready to fight or to show dominance. Long, thin rooster hackles are popular in fly fishing as artificial flies in fly tying.

Most people are familiar with cats and dogs raising their hair when threatened or ready to attack. It's part of the fight-or-flight response, a nervous system reflex in life-threatening situations. The same happens to roosters. The only difference is that they carry feathers. Be careful when a rooster has his hackles up.

Chicken's hackles are very popular in fly fishing. The hackles make great dry flies that float on water. The feather's barbs look like tendrils, making fish pluck the insects from the water's surface.

There are many feather groups on a wing, which can be overwhelming. It's easier to understand the terminology once you know the differences between flight feathers and covert feathers and how the feathers attach to the wing bones.

Flight feathers are long stiff feathers on the wing that the chicken uses to fly and lift off. Covert feathers cover the base of the flight feathers. They smoothen out the surface, so the bird is more aerodynamic.

Feathers usually grow on the skin, but the shaft of a flight feather anchors to the bone.

The wing bones are very similar to our arms. Chickens fly with their forearms and hands. The flight feathers are attached to the ulna and metacarpals.

There are some smaller feathers on the humerus (upper arm), but they are not attached to the bone.

The main feather groups on a chicken wing are:

All these main feather groups have subdivisions.

The coverts form rows that overlap each other like roof tiles. The rows are respectively called greater, median, and lesser coverts, with the lesser coverts being the top level.

This results in the following feather subgroups:

The alular feathers on the chicken's thumb also have rows of covert feathers.

What's unique for chickens and turkeys is that they also have covert feathers attached to their wrist or carpal bones. These are the median carpal covert and the major or greater carpal covert.

Chickens have a feathered head, and some breeds come with extra facial features:

Beards and muffs give a chicken a fancy look and are typical traits in breeds like Araucanas. In 2016 scientists discovered the responsible gene in the chicken's DNA. The muffs and beards result from a genetic mutation in the HOXB8 gene. The gene sits on a tiny microchromosome with facial skin expressions.

A crest is typical for breeds like the Polish and Brabanter. It's also gene-controlled and expressed by the Cr-gene.

Saddle Feathers are the feathers on the back of a chicken, between the neck and tail. Most roosters have glossy, long, pointed saddle feathers. Hens have short, round feathers. The feathers cover the upper and lower saddle. Saddle feathers are popular in fly fishing as artificial flies.

The ground color of a wild-type rooster's saddle is red to gold, but genes influence the color and saddle striping. Several pattern genes and black pigmentation enhancers alter the look of the upper and lower saddle. For example, partridge-colored roosters show saddle striping, whereas Wheaten coloring has less striping.

The feathers in a chicken tail:

Some breeds like Cochins, Brahmas, and Silkies come with feathered feet.

There are two types of feathering on a chicken's legs:

Feathers on the legs make a chicken prone to leg mites and picking. The feathers can also get dirty, wet, and muddy, which can cause trouble in the nesting boxes or cause frostbite during wintertime.

Origins of Leg Feathers in Poultry

Ptilopody feathers (Pti) and Vulture Hocks (V) are gene-controlled. Birds with both the Pti- and V-genes have plenty of feathering on their legs. However, the feathers are not present in junglefowl, the ancestor of the domestic chicken.

Feathers on a chicken's leg have recently been linked to the DNA of a 125 million-year-old dinosaur, Microraptor Gui. This amazing raptor had four feathered wings to fly around. Their back wings' anatomy is similar to our domestic chicken's legs.

The fluff or vent feathers are the small, soft feathers on the bottom of a chicken surrounding the vent. These feathers can get dirty when a chicken sleeps on the ground, in a nesting box, or when there are problems with the digestive tract, such as vent gleet.

They are popular on social media, where people post photo's of their chickens on Fluffy Butt Friday.

However, two types of plumage can be considered soft-feathered:

Silkie feathering has been crossbreed from Silkies into other breeds such as the Silkie-feathered Chabo variants.

Frizzle can be seen in any breed but is common in Cochins, Silkies and Polish chickens. There is also the Frizzle breed, a distinct genetic line. Some European countries list the Frizzle as an official breed.

Breeding with Frizzle plumage can be complex because genetic modifiers influence the trait. When breeding Frizzle with Frizzle, the feathers can become extremely curved, narrow, fragile, and brittle. These birds are called frazzles and lose many of their feathers.

Molting is a natural process in which chickens change their feathers over a few weeks. They usually molt in the late summer or fall. Some chickens molt so gradually you might not even realize it's happening, while others run around almost naked. Birds need some extra care during molt.

Some poultry goes through an Eclipse Molt. Eclipse Molt is a particular type of molt where the colorful roosters molt into a dull basic plumage after breeding. At that point, they almost look like hens.

Although Eclipse Molt is well known for ducks, it's also present in junglefowl varieties and game fowl.

Hen Feathering is a condition where roosters grow the plumage of hens. A genetic mutation changes the bird's appearance, but the roosters keep their typical behavior. Some breeds like Sebrights and Belgian Campines are naturally Henny-feathered.

Roosters that carry the Hf-gene have higher levels of estrogen, a hormone that triggers female feathering. In the body, estrogen is made from testosterone, the male sex hormone. Chickens with the Hf-gene transform too much testosterone into estrogen, which triggers the female look.

It's a common belief that roosters with hen feathering have significantly reduced fertility, probably due to high estrogen levels. That's why some Sebright breeders use roosters that don't carry the gen.