Pinless Peepers: Do or don’t? 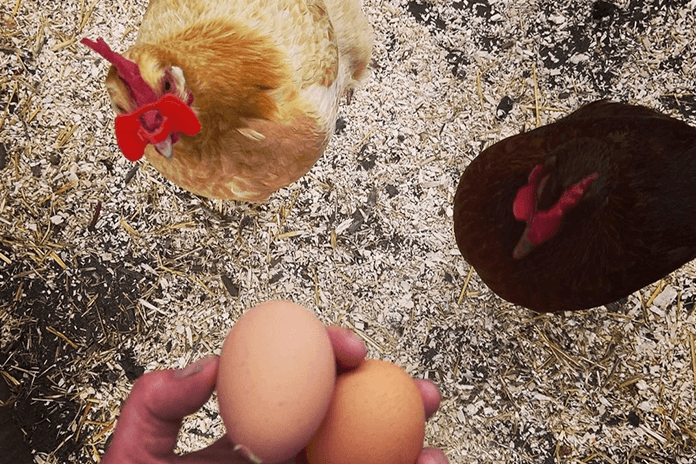 Pinless peepers, or chicken blinders, are often used to prevent a chicken from pecking and bullying other chickens or pulling its feathers.

But do they work? And do pinless peepers hurt a chicken?

The answer is very simple.

However, using pinless peepers to prevent pecking isn't always necessary, as pecking can be explained by common reasons like chicken molting or boredom. Try and address these issues before turning to the use of pinless peepers.

Plenty of backyard chicken keepers have positive experiences with pinless peepers. These small plastics are a quick and affordable solution to pecking issues.

If you're hurrying to get some blinders, here are some of the best-rated sellers.

We'll discuss these suppliers in more detail later on. Let's first dive into the what and why.

Why do chickens peck themselves or others?

There are numerous reasons why a chicken starts to peck others or themselves.

Preventing and discouraging any pecking towards themselves or other chickens is better than curing afterward. By addressing common causes of feather pecking, we need to look into the following issues:

By solving these issues, we've narrowed down the chances of feather pecking, but that doesn't mean it won't happen again.

When or why use pinless peepers?

Pinless peepers are tiny plastic chicken glasses they wear on their nostrils. It looks a bit silly and funny.

Pinless peepers make it impossible for the chicken to look in front of them, so it blinds the chicken in a sense. By blinding what's happening right in front of your chicken, chances of aggression towards other chickens get slimmer.

When to use pinless peepers?

As a chicken keeper, you know your flock best. When none of the apparent causes of feather pecking (like lack of space or boredom) apply to your flock, you'll have to try and work on the pecking problem by breaking the bad habit.

Whether pinless peepers will stop your chickens from pecking themselves or others depends on their personalities. Pinless peepers are not miracle workers but discourage aggression and pecking behavior. Chances of success are relatively high, and because of their low price, you can quickly try them out.

It is actually scientifically proven that peepers significantly reduce feather pecking and feather loss for chickens. The relaxed hens even jumped on a healthier eating pattern with less spilled food and higher egg production in the end.

How do pinless peepers work?

Pinless peepers intend to stop pecking behavior by blocking the direct view of the chicken. By blinding them, it makes your chickens less likely to show interest in other chickens, let alone attack them. Although it blinds their direct vision, the chickens can still see things next to or under them. It doesn't interfere with eating, drinking, walking around, or dust bathing, but without the drama and mischief they usually get themselves into.

Pinless peepers are not supposed to hurt your chicken when put on correctly. When placed incorrectly, they can hurt, so keep an eye on them as they might hurt themselves when trying to get it off.

The blinders are placed on the nostril, so it takes them some time to get used to, but pinless peepers should never be painful in any way.

This raises the next question.

What are Painless Peepers?

'Painless peepers' is sometimes used as a layman's term for pinless peepers. It's a painless solution for blinders in chickens but is also used for other birds, like pheasants.

At the beginning of the 20th century, such a painless solution was revolutionary in the poultry industry, and a patent was filed for it in 1935.

How do you place pinless peepers on your chicken?

It's not that hard to install them, but it can take some practice. Make sure you have someone to hold the chicken for you and keep its head steady. Most blinders work the same by following a couple of easy steps. A set of snap-ring pliers can be helpful. Keeping their eyes covered can also calm them down.

Open up the peepers a little by putting and squeezing the pliers as in the picture. Hold the peepers over the chicken's head and position them above the nostrils. Start by putting one pin in a nostril. Then let the pliers go so the other pin goes in the other nostril. In one movement, pull the pliers out.

Always read the manual included. Some people find it helpful to warm the peepers by soaking them in water. This makes them more pliable.

The bird will not enjoy the fact that you are putting plastic in her nostrils and will start shaking its head in disbelief. You may notice your chicken behaving weirdly after placing the blinder on its nostril. It's also possible that the other chickens will start pecking the peepers. But that's all normal. The blinder takes some time to get used to.

To take them off, use the pliers to open up the peepers. If you manage to take them off without a crack, you can re-use them later.

How long before you take the pinless peepers off?

It's recommended to replace the blinders every two weeks to prevent them from getting stuck in the nares. For some birds, the bullying stops immediately when the peepers are on. Then two weeks can be enough.

Most chicken keepers only use pinless peepers temporarily. You can try them on for a couple of weeks at first. After taking them off, see if the pecking behavior has disappeared. If not, place the blinders back and keep them on for extended periods. Sometimes it takes 6 months to change their attitude.

It should not hurt them, so you can easily leave the blinders on for a couple of months. That said, there are always birds annoyed and trying to scratch them off. Keep an eye on them to ensure the blinders are not irritating the nares.

What material are pinless peepers made of?

Most pinless peepers are either made of polypropylene or polyethylene, the top 2 widely produced commodity plastics. However, polypropylene is much stronger. They both look very similar.

Polypropylene is a bit more expensive than polyethylene, but it's stiffer. Polyethylene is less rigid and more flexible.

Why are they called pinless peepers if they have pins?

The pinless peepers actually have two small pins. The nostrils of the chicken are just keeping the prongs of the peepers in place. They should not damage any delicate tissue in the nose and only fasten on the edge of the nares.

Compare this to pinned peepers, which have a single pin that goes through the nostrils. This kind of peeper pierces through the nasal septum of the bird and is common in the poultry industry but is painful for chickens.

For chickens, we recommend the use of pin-less peepers. These don't pierce any tissue and reduce the risk of inflicting any damage or pain on our beloved birds.

Where are Pinless Peepers manufactured?

We've listed a couple of top Amazon sellers at the beginning of the article. We've researched the sellers, and most of them - if not all - are selling Chinese imports. Similar sellers on Alibaba sell poultry glasses in packs of thousands with very small price tags.

The highest-rated pinless peepers brand on Amazon is Weilan, sold by Rongkai Ltd, A Chinese group from Jiujiang that targets the US as its primary export region. They are also the best-rated overall seller for blinder colors other than red. The best pinless peeper comfort-rated brand is ROYHOO which is also Chinese imported by Roy Hoo. Although we should mention that these blinders have far fewer ratings than the top sellers.

When we compare the top-selling items, we can't visually see any significant difference in the build and composition of the peepers. Some buyers report that a small percentage of blinders in their pack had manufacturing defects that passed quality control.