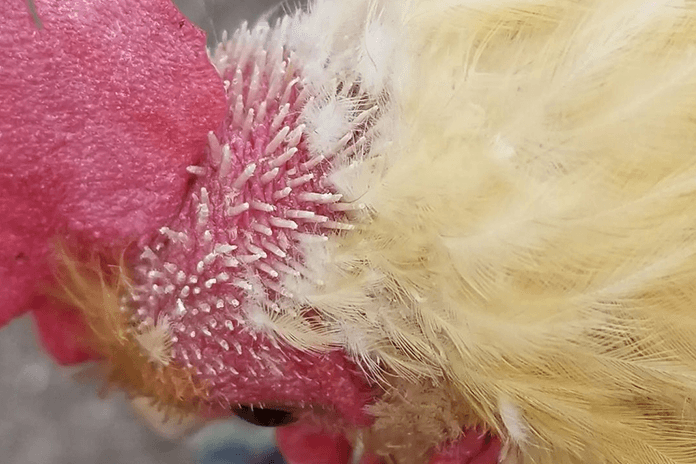 What is chicken molting? And how to take care of your chickens during molting?

Chicken molting can be quite frightening, with bald spots everywhere and loose feathers inside the coop. It may look like your chickens are sick.

Not to worry! Molting is a very common and yearly process that looks scary but isn't dangerous at all. However, your chickens could use some extra attention and care during this time of year. For them, it could be slightly uncomfortable, maybe a little bit painful sometimes, so make sure to give them some TLC.

We'll guide you through everything you always wanted to know about chicken molting.

What is chicken molting?

Chicken molting is a natural process that takes place every year during fall. Like humans shed skin or animals shed hair, chickens shed their feathers. During molting, a chicken can look a bit shabby or even sick, but there is nothing to worry about. They will be showing off their new flashy feather coat in no time, ready for winter!

Chicken molting time can be very intense for your favorite garden pets. Not only for hens; both hens and roosters will lose their feathers in exchange for new ones.

Baby chicks also change their feathers during the first year:

This is the first time you can tell for sure whether you've grown a hen or a rooster.

How long do chickens molt?

The duration of chicken molting depends from chicken to chicken and your flock won't probably mold at the same time. So if you have quite a large flock, molting can last up to 2,5 to 3 months. Overall, the duration of chicken molting can be anywhere between 3 to 15 weeks, depending on the age, breed, health, internal timetable of your chickens. So don't worry if a chicken takes a little more time to exchange feathers.

Most chickens molt gradually. It starts at their head, moves on to the breast and thighs, and finishes at the tail.

caring for chickens during molting

You will notice that during molting chickens can look unhealthy, skinny, or even a bit sick and are overall not very happy. For them, it's not the most pleasant time of year. Chicken molting can be painful when new feathers are coming through, however, that's not always the case, but it can be slightly uncomfortable.

Keep a couple of things in mind:

Feathers are roughly around 85% protein, so the production of new feathers takes up almost all intake of protein by your chicken. This also causes hens to stop laying eggs during the chicken molt. We will need to increase the intake of protein during this time of year to help them replace their feathers more easily and give them a protein boost.

When the chicken molt has ended it's not necessary to supplement protein to their food, it can even be damaging to their health to keep giving them extra proteins, so please be careful.

During molting, you can switch them to high-protein chicken food that contains a minimum of 18 to 20% protein. You can also temporarily feed your chickens gamebird feed that contains around 22% protein.

Next to high protein-chicken food, always keep fresh water available and it's a good idea to add some apple cider vinegar. Raw (unpasteurized) vinegar contains loads of vitamins and minerals and also has an anti-bacterial effect that helps your chickens digest. Add one tablespoon of apple cider vinegar to one gallon of water.

Don't Pick Chickens Up During Molting

Losing plumage is not painful at all but as mentioned before, chicken molting can be a bit painful when new feathers regrow. Before they turn into actual feathers, these 'pin feathers' or 'blood feathers' as we call them, look more like porcupine quills.

Touching these quills will hurt as they put pressure on their skin. So during this time, it's very important to never touch the quills or pick up your chicken as it will increase stress levels and will be painful for them.

After about five days, the quills start to flake off and turn into real feathers.

Pamper Your Chickens With Healthy Snacks During Molting

Molting can be a rough time for your flock. Hens and roosters can get moody and unhappy. It's always a good idea to pamper them with some extra love and care, and what better way to do it than with some yummy snacks.

But there's a ground-rule: don't exaggerate. Never feed your chickens more than 10% of their total feed of the day in snacks.

Don't Put Chickens In A Sweater During Molting!

Sometimes chickens can look a bit scrappy and bald during molt and you might think they're cold. Believe us, they are not. Never put your chickens in sweaters, it will hurt them. The pin feathers are very sensitive when touched so putting on a sweater over these feathers will make them miserable and sad.

Why do hens stop laying eggs during molting?

Molting is a bit stressful and exhausting for a hen. They will need a huge amount of protein to make new feathers, so the protein level will be used completely for their new plumage. So during molting, the egg-laying will slow down at best, but most of the time it will come to a complete stop.

The second cause of hens stopping laying eggs during molting is daylight. As mentioned before, molting occurs during autumn until early winter, when days shorten. Hens need 14 to 16 hours of daylight to lay eggs so this is why during winter hens stop producing eggs. Don't try and solve this by adding artificial light to the chicken coop during fall or winter. Forcing hens to keep laying eggs during molting can weaken their immune system. They'll start laying eggs after molting is over.

Don't worry if your flock seems moody and unhappy during molting, it's perfectly normal behavior and they'll cheer up in no time! But always keep an eye on your flock. You never know when problems occur.

Situations during molting you need to keep an eye on:

Pecking Other Members Of The Flock

Even when not molting chickens peck at each other, the behavior is not uncommon. You need to ensure that you've supplemented their food with extra protein. As mentioned before, chickens need increased protein levels during molting because of the new feathers coming through. They will start pecking each other to get extra protein from the other chicken's feathers if they lack protein.

Sometimes chickens are not very friendly to one another and during molting, it could get worse. Chickens who are low in the pecking order can be bullied which can cause stress so this should be handled. Try to find out why this chicken is being bullied. Maybe she's injured or wounded.

Injured chickens are considered to be 'weak' by other members of the flock and, therefore, are most likely to be bullied. When an injury occurs, you should remove that chicken from the flock to recover but don't take her out of the chicken run. Create a 'safe haven' with some chicken wire inside the chicken run so she stays visible to other flock members.

When there appear to be no visual or health reasons for a chicken to be bullied and the bullying won't stop, remove the bully from the chicken run. After a couple of days, he or she can come back. They will possibly have lost their place in the pecking order. If not and they start bullying again, remove the bully once more, but maybe a bit longer this time. Keep on doing this until the bullying stops.

If nothing helps, another possible solution could be to install pinless peepers.

Try to avoid stressful situations as much as possible. Chickens' skin is very sensitive during molting and should be handled accordingly. This means no loud music near the coop, try and solve any problems like bullying in your chicken coop and, as mentioned before, don't pick up your chickens during molting as it can be painful.

Keep an extra eye on the chickens lower in the pecking order and make sure they're feeling ok.

Why is my chicken losing feathers outside molting time?

Although molting is the most common reason for missing feathers, there are other causes for feather loss. When you pay attention to where these feathers are missing, you can start determining what is wrong.

Please consult a veterinarian when your chicken keeps losing feathers outside the molting season.