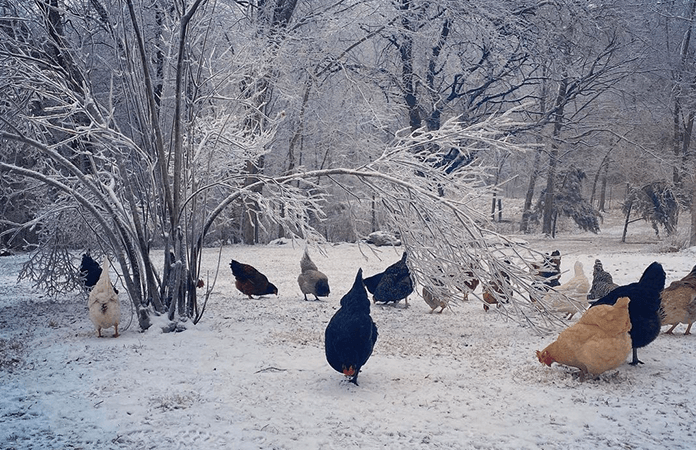 Yes, chickens can and will eat snow for water during winter, especially if no other water source is available. Chickens are hardy animals that do very well during harsh and cold winters; they don't mind eating snow instead of water and will even do so even if there is plenty of water around. But there are some things to keep in mind.

Can chickens eat snow instead of water?

Yes, chickens can eat snow instead of drinking water. Many wild birds or wild animals eat snow during winter to stay hydrated; it's in their instinct. Some chickens prefer pecking in fresh snow rather than drinking water and eating snow, even when fresh water is available.

When temperatures drop below freezing, your chickens' waterer will also freeze. Plenty of tips and gadgets are available to prevent this from happening, but you can rest ashore; your chickens can hydrate themselves by eating snow.

However, they need to eat quite a large amount of snow to stay as hydrated as they would be by drinking water. Compare it with filling a cup with fresh snow and letting it melt. You'll notice that the cup was only filled for a few inches with water but was completely filled with snow. The water density in snow is much lower, so they need to eat more snow to get hydrated as much as they would by drinking water. Keeping enough water available is required, even during winter.

Always check your birds regularly during winter to ensure they are hydrated and healthy. If you notice your flock has stopped eating, something is up. Lack of appetite is one of the first signs of dehydration because they can not swallow or digest anymore.

Chickens won't need as much water during winter as they do in summer, but keeping some fresh water available at all times is key. But some chickens prefer anything but the waterer. They'll rather drink out of dirty puddles or eat from snow. Maybe you've noticed the same happening with other animals, like cats. They have fresh water available but prefer to drink out of a puddle or a bird bath.

Many animals prefer rainwater to tap water. Depending on where you live and the condition of your water pipes, animals don't always like the taste of tap water. Tap water also often contains fluoride and chloride, which makes 'dirty' water tastier for animals.

Yes, chickens can drink rainwater without any trouble. But you have to ensure the water is fresh and no algae are found, as algae in stagnant water can produce dangerous toxins and cause algae poisoning in chickens.

Chickens can get poisoned when drinking water with bacterial colonies of green-blue algae that live on the surface of stagnant water. The algae can spread quickly and create large blooms on the water's surface, but often you can't see it. If the water smells bad, ensure your chickens or no animals can reach it to drink from.

If you want to collect rainwater, you can install a cistern or use a barrel, both can be used, and your chickens will be happy to drink the water. Collecting rainwater is a self-sufficient system to water your plants without relying on tap water.

Yes. Chickens can drink tap water; however, many animals prefer rainwater. Tap water can taste very differently depending on where you live and on the condition of your water pipes. It also contains fluoride and chloride, making rainwater tastier for animals, but they can also cause health issues.

Fluoride in water can be dangerous for animals. You should not give your chickens tap water when living in an area with high fluoride concentrations in the water. Water testing kits can be easily purchased online if you want to find out your local tap water's chloride and fluoride levels. The general rule is if it's safe for you to drink, then it's safe for your animals too.

Drinking from puddles or drinking rainwater is also a matter of variety. Tap water always tastes the same, but puddles and natural water are always a new adventure as they all taste different. Chickens can taste different flavors, although they have fewer taste buds in their mouth than humans.

And, like most animals, chickens are curious animals, and if they see a new puddle in the run, they have to try it out immediately.