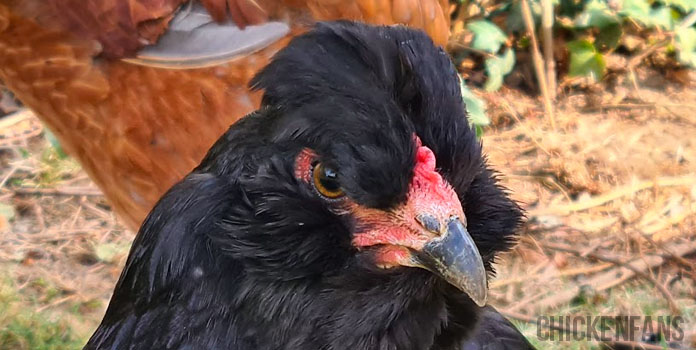 Araucana chickens are among the few breeds in the world to lay blue-shelled eggs; that's why they are so popular. Next to their colorful eggs, Araucanas have quite distinguished looks, with their ear tufts and lack of a tail.

We'll take you through all there is to know about this famous blue egg-laying breed.

Araucanas are medium-sized birds, not the heaviest or the tallest of the bunch. But they make up for the lack in size with their striking looks and wonderful colored eggs. This breed has an upright stand, reminiscent of Oriental gamefowl, but their appearance is quite different.

There are several identifying characteristics combined in this breed:

Araucana chickens have distinctive ear tufts, some bigger than others, and appear as upturned feathers near the ear. But, most Araucana flocks are a mixture of tufted and clean-faced birds, as the tufted gene is a lethal gene, meaning the success rate of hatching tufted chicks is low. We'll discuss the challenging genetics of this breed later in this article.

Ear tufts are something an Araucana is born with or not. It does not appear suddenly as the bird ages; it's either there or not.

When breeding Araucana chickens as show birds, the lack of a tail is something to keep in mind, as it is not optional in US poultry shows. Ideally, Araucanas are born rumpless, without a tail, and without the uropygium, the oil gland, that keeps their feathers protected and clean.

Like in the ear tufts, complicated breeding procedures are involved in creating a rumpless bird. As there is no way to predict the outcome of pairing the 'tail genes' to each other, some Araucanas hatch (to some degree) rumpless, some with an odd tail, and some tailed.

Few breeds worldwide lay blue-colored eggs, the Araucana being one of them. There is a big difference between breeds laying purple or pink eggs and the blue eggs of the Araucana. Pinkish-looking eggs are (light) brown eggs with a pinkish bloom, so the inside isn't pink or purple. An Araucana lays blue-colored eggs that are as blue on the inside as outside. The color of the egg is in the shell, not in the bloom.

The eggs of an Araucana can differ from bird to bird, and you'll never know its color until your pullet lays its first egg. The color can vary between (very) light blue or green and khaki. It's also not uncommon to find Araucanas lacking the blue egg gene and having brown egg genes. Only blue-laying birds, however, are admitted to poultry shows or exhibitions in the US.

An Araucana bird can have various combinations of both skin and shanks. Their skin is mostly white but can be yellow. The shanks can be yellow or willow, depending on the feather coloring of the chicken. The breeds' legs are clean.

This breed has a fascinating history. It's believed they originate from Chile, in the remote area of Araucania. In this region, two species with the distinct genes of tufts, rumplessness, and blue eggs were found: Collonocas and Quetros. The first breed was rumpless and laid blue eggs. The second breed had distinctive ear tufts but laid brown eggs and had a tail.

During the 1880s, a young Chilean breeder gained interest in these two species. After observing them for a while, he crossed the two breeds, and after many years this developed into what we know now as the modern Araucana. In 1914, the Chilean breeder was visited by Salvador Castello Carreras, a Spanish aviculturist, who introduced the new species to the World Poultry Congress in 1918.

However, obtaining or exporting Araucanas out of Chile remained very difficult. The flock of the original Chilean breeder wasn't obtained, and the two original breeding species got mixed with other breeds. It took until the 1960s until a group of dedicated breeders started an Araucana breeder's group. The breed got officially recognized in the 1970s.

It remains pretty challenging to breed Araucana chickens because of the combination of several unusual traits, such as blue eggs, ear tufts, and rumplessness.

The biggest challenge for breeders is the ear tufts and the lack of a tail. Both the ear tufts and the rumplessness are caused by a lethal gene. If both parents carry that specific gene, the chick will die in the shell during days 17 to 19 of incubation. Even if a tufted chick successfully hatches, the survival rate is much lower with tufted chicks than with non-tufted ones. Only 25 to 50% of double-tufted and rumpless chicks survive incubation and the post-hatch period, where most breeds have successful hatching rates of 90%.

Next to the tufts and rumplessness, the blue egg color is also caused by a (non-lethal) gene. Chickens that lay blue eggs have Dominant O in their genes on chromosome 1. This factor is called Oocyan, that's why it's written with the letter O.

Chickens with the blue egg gene will lay eggs that are blue on the inside and outside of the shell.

The gene for pea combs (P) also sits on chromosome 1, very close to the O-gene location. You can see this if you inspect the areas on the chromosome linkage map. Since the genes are so close together, they often stick together. That said, the pea comb gene and the blue eggs are two different genes, so they don't always have to come together, but they usually do.

Araucana hens are not the best layers compared to egg machines like a Leghorn or a Rhode Island Red. But they are still good layers, bringing up to 3 eggs per week to the table. That's approximately 150 eggs per year. All eggs are medium-sized and light blue or green in color.

Don't be disappointed if the eggs of your Araucana are not bright blue; they usually lay very light blue or light green. The eggs may even look white with a greenish shine.

Araucana hens can often become broody; this makes them excellent mothers and is an advantage when you're planning to hatch eggs. However, this is something to keep in mind as broodiness stops egg production.

They are cold, hardy birds but significantly slow their egg production during winter. This means you'll occasionally get an egg from them, but less than in spring or summer. They'll catch up as days prologue and temperatures get higher.

Araucanas are pleasant birds with friendly personalities. They are kind and not aggressive; however, they can be a bit on the dominant side towards other breeds inside the flock. It's best to place them with other dominant breeds, like Wyandottes, to keep them from bullying less assertive breeds.

One thing to remember is that Araucanas are active birds that love roaming around in the garden and need plenty of space to stretch their legs, although they're not giant chickens. They can be flighty and have no trouble jumping or flapping over the fence. However, they love the company of humans and can be excellent pet chickens if trained early.

The breed is cold-hardy but needs extra care during extreme weather conditions. They are not especially heat-hardy, but all chickens stand cold temperatures better than hot ones.

Araucana chickens have a fascinating history and breeding process. These chickens are not easily bred because of their distinctive features: rumplessness, ear tufts, and blue eggs. That's why you'll often see Araucanas lacking one or more of these characteristics.

They make great backyard chickens and lay around 3 medium-sized light blue eggs per week. Araucanas can be a great asset to your flock because of their friendly personality and colorful eggs.