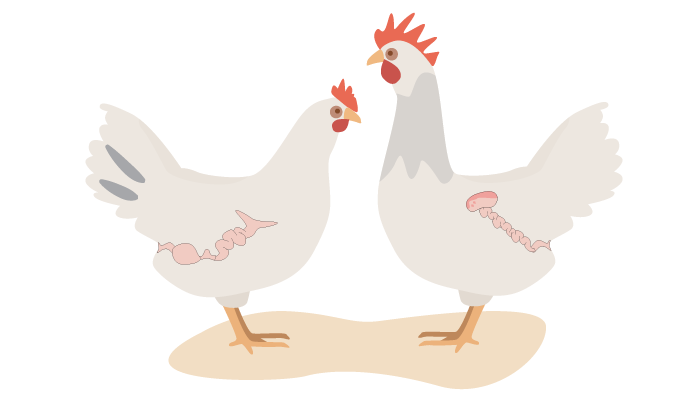 It's useful for any chicken owner to understand the basics of these miniature egg factories.

Overview of the Chicken Reproductive System

Hens are born with thousands of mini egg yolks growing in the ovary. Every day a full-grown yolk starts its 24h travel through to the oviduct, the egg factory where the whites and shell form. It takes about 20 hours for the eggshell to crystallize.

Chickens only have one opening, so the eggs, droppings, and uric acid pass through the same opening. When the chicken lays the egg, the vagina folds inside out to separate the egg from the droppings.

Roosters have a less complex system. Their testes are on the inside of the chicken's body. Roosters don't have penises; the sperm they produce ends up in their cloaca.

To describe the reproductive system, we follow an egg yolk on its travel from the ovary through the oviduct all the way to the vent.

The ovary is a cluster of tissue sacs containing tiny egg yolks, or ova. The sacs are follicles that gradually fill with yolk to mature. Every chick that hatches has tens of thousands of ova that can grow and become large egg yolks.

The follicles are covered in a web of tiny blood vessels, but they have a relatively vein-free line called the stigma. When a yolk is about an inch in size, the follicle bursts along the stigma and releases a small yolk to the oviduct, the ovulation.

Sometimes a blood vessel crosses the stigma of a follicle. When such a follicle bursts, this can cause blood spots in the egg yolk.

Chickens are born with two ovaries, but only the left one develops. After hatching, no new ova form, so every hen is born with a limited number of eggs in her body.

If a rooster is involved, fertilization takes place in the infundibulum, with sperm stored in the sperm host glands. The sperm cell enters a tiny spot on the yolk's surface, called the germinal disk or blastodisc. The eggs get fertilized, and the blastodisc turns into a blastoderm.

Theoretically, the blastoderm is the real egg and the earliest stage of the embryo. However, embryonic development pauses in the yolk and only resumes after laying during incubation.

Unfertilized yolks also ovulate, so hens will also lay eggs when there is no rooster around.

The magnum is the part of the oviduct where the egg white forms around the yolk. This takes about three hours. The magnum is 13 inches long and has inner spiral ridges that rotate the egg yolk.

The continuous spinning creates two twisted protein bands on the top and bottom poles of the yolk called the chalazae. These chalazae keep the egg yolk in the center of the egg and prevent it from floating around.

The albumen further consists of three layers: the internal liquid layer surrounding the yolk, the thick middle layer, and the exterior fluid layer. About 50-60 percent of albumen resides in the thick layer. This layer is dense because it contains mucins, glycosylated proteins that form a gel-like substance.

The isthmus is the part of the oviduct where the inner and outer shell membranes form. This process takes about 75 minutes. The membranes can slide over each other.

In the isthmus, the egg is still stretched and long, and it's only in the uterus that the egg gets its signature shape.

In a chicken's uterus or shell gland, thin albumen builds around the yolk and the eggshell forms. It's a slow process that takes 20 hours to complete.

Sometimes an egg gets stuck in the uterus for several hours, and a second egg catches up on the first egg. This results in a chicken laying two eggs in a single day.

The thin albumen forms by water penetrating the thick albumen. The water infiltration causes the egg to bloat, which results in a round egg shape.

The shell gland secretes calcium carbonate, which crystallizes on the outer shell membrane. The crystals bond to form a solid shell, but leave microscopic pores, so the embryo can still breathe.

In this stage, the color pigments also enter the shell. Egg color is genetically determined. Calcium carbonate is white, but brown layers add a brown pigmented layer. Blue layers have blue pigment all the way through. When a blue egg has a brown pigment layer on the outside, it turns olive.

Last, a cuticle layer covers the eggshell, also known as the bloom. The cuticle allows air to pass through but prevents bacteria from entering the egg. Washing an egg removes the protective bloom layer.

Hens only have a single vent. The eggs, droppings, and uric acid all pass through the same opening. The vagina turns inside out while laying to keep the droppings separated from the fresh egg.

Oviposition is the process where a chicken lays the finished egg. During oviposition, the egg turns around in the vagina, so the big end comes first.

The reproductive system of roosters is considerably less complex.

Roosters carry two testes along the chicken's back next to the kidneys. Their sperm remains healthy at body temperature, so they don't need an external scrotum. While hens are born with a fixed set of egg yolks, roosters produce sperm as long as they are sexually active.

The vas deferens is the tube that connects the chicken's testes with the cloaca and stores sperm. Roosters don't have a penis. Instead, the tubes end in the papilla, a little bulge in the cloaca. Pressure on the vas deferens and papilla during mating results in ejaculation.

When chickens mate, the rooster gets on the back of the hen, and they press their cloacas against each other. During this cloacal kiss, the sperm transfers to the hen's sperm host glands in the oviduct.

Every hen has numerous sperm host glands in the oviduct that can store sperm for about ten days. Sperm first enters the uterovaginal glands at the bottom of the oviduct. From there, it travels upwards to the infundibular glands, where fertilization occurs.

Hens are born with a fixed set of tiny egg yolks growing in follicles in their ovary. The ovary releases the large yolks to embark on their journey through the oviduct.

In the oviduct, the yolks first pass the infundibulum, where fertilization can occur. The thick albumen or egg white builds up in the magnum. The continuous spinning in the magnum creates two chalazae, twisted bands that keep the yolk in place.

It takes 20 hours for the colored shell to crystallize in the uterus or shell gland. In the last step, the shell gets a bloom coating or cuticle that protects it from infiltration of bacteria. When the egg is complete, it's turned around before the hen lays it during oviposition.

Roosters have a simple reproductive system. Their testes lay inside the body, and sperm is collected in tubes that expel it via papilla, small bulges in the cloaca.

When chickens mate, the rooster gets on the back of a hen and rubs the cloaca. In that short moment, the sperm enters the hen's cloaca glands. From there, it travels through the oviduct to the infundibulum, where fertilization of the yolk occurs.