Blood in the Egg Yolk 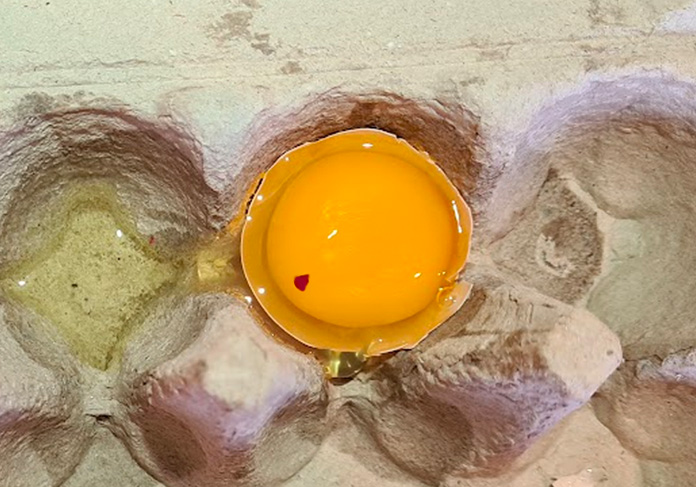 It can be alarming when you notice blood in the egg yolk, but it's nothing to worry about. The egg is safe to eat, and there is nothing wrong with your hen.

Let's take a closer look at the blood spots you might encounter in egg yolks.

Why is there blood in the egg yolk?

Blood in an egg yolk comes from burst blood vessels in the ovary of a chicken. Every hen is born with several thousand tiny yolks that develop in the ovary, each in its own veined follicle. Fully developed yolks rupture the follicle and its blood vessels, which can result in blood deposits in the egg yolk.

Although the follicle's surface is covered in a web of tiny blood vessels, it ruptures along a relatively vein-free line called the stigma. Every now and then, there is a blood vessel that crosses the follicular stigma. When such a follicle bursts, a drop of blood can enter the yolk. Sometimes the follicular sac does not rupture along the stigma line, which also results in blood spots in the yolk.

The egg yolk is surrounded by the vitelline membrane that acts as a barrier to protect the yolk. This vitelline membrane keeps the blood clot inside the yolk. When the egg travels further through the oviduct, the egg white (albumen) and eggshell form, but the blood stays in the yolk. Eventually, this results in the red spots you sometimes see when you crack an egg.

Is it safe to eat eggs with blood spots?

Eggs with blood spots are safe to eat. They might not pass the quality control of global commercial-grade egg farms, but they are perfectly edible. If you feel uncomfortable eating blood spots, you can remove them before cooking.

The USDA publishes quality standards for commercial eggs. Article 56.203B in the United States Standards, Grades, and Weight Classes for Shell Eggs (AMS56) specifies that small blood spots (aggregating not more than 1/8inch in diameter) are considered serious defects that do not render the egg inedible. The same holds for meat spots in the egg.

The European Commission regulation No 589/2008 does not mention blood spots as a quality characteristic (art.2) and only mentions the yolk needs to be visible as a shadow on candling.

What causes blood spots in the egg yolk?

Blood spots occur in about 2-4% of eggs. The occurrence varies with the breed and strain of the chicken. You will only encounter blood spots in one to three percent of the eggs in the grocery store. But with backyard chickens, it can be one egg in ten. Some White Leghorn strains will even lay more than 50% of their eggs with blood spots.

Contrary to popular belief, egg color is not a genetic factor in the occurrence of blood clots. In commercially sold eggs, the white eggs are easier to candle and inspect than brown eggs. That's why you encounter fewer blood spots in white eggs from commercially farmed chickens.

Several environmental factors can increase the incidence of blood spots in the egg yolk:

Are eggs with blood spots in the yolk fertilized?

Instead, fertilized eggs have a small white spot in the egg yolk, sometimes called the bullseye. If the egg yolk contains sperm when it's released to the oviduct, the sperm cell attaches to the germinal disc in the yolk and becomes a blastoderm. It's the white spot you can see on the yolk and it's the earliest embryo stage.

The blastoderm grows in the white spot when the egg is constructed, but the development stops until the egg is incubated.

Blood vessels only grow from the blastoderm into the yolk when the egg incubates at the correct temperature. If you crack an egg that has incubated for a couple of days, you get a vascular yolk with a clearly defined network of capillary blood vessels and possibly a small embryo.

Is blood in the egg yolk bad for a chicken?

No, blood spots in the egg yolk are normal and occur frequently. It's an unavoidable side effect of rupturing the vascular follicular sac that contains the egg yolk in the ovary. However, if it happens all too frequently, it might be a clinical sign of an underlying condition.

Chickens that lay eggs with blood spots all the time might suffer from vitamin A or K deficiencies, mycotoxin intoxication, diseases that affect the reproductive organs or live in stressful confinement conditions.

Difference between blood spots and meat spots in an egg

Blood spots come from ruptured blood vessels in the ovary, whereas meat spots are tiny brown pieces of tissue torn from the oviduct. Blood spots usually occur in the egg yolk, and meat spots primarily appear in the egg white.

When egg yolks are released from the ovary, they start their journey through the oviduct. It takes more than 4 hours before they reach the uterus, where the shell is formed. The egg whites and membranes are formed around the yolk during that time. Any shed body tissue that the egg passes will end up in the egg white.

Body tissue is frequently shed from the reproductive organs. The inner surface of the oviduct is lined with epithelial cell layers. If cells of the inner lining get damaged, the body excretes the tissue and creates a new layer of cells. The tissue leaves the body via the egg.

Occasionally, the brown spots in an egg can also be blood spots that have already started to turn brown due to oxidation. This looks very similar to meat spots.

Blood in the egg yolk comes from ruptured blood vessels in the oviduct during the egg-laying process. When the ovary releases the egg yolk, the follicular sac ruptures, which can deposit some blood in the yolks.

It's a normal part of nature, and the eggs are perfectly safe to eat. Eggs from the grocery store will contain fewer blood spots as they won't pass quality control.

The occurrence of blood spots varies per breed but is also influenced by external factors. Vitamin A and K deficiencies, stress, toxins, and diseases can increase the risk of blood spots in the egg.

Finding a blood clot in the yolk does not mean the egg is fertilized. Instead, fertilized eggs have small white spots. Blood vessels will only start to grow into the egg yolk when the egg is incubated at the right temperature.

Sometimes an egg can contain brown spots. These meat spots contain some shed internal lining tissue of the oviduct.