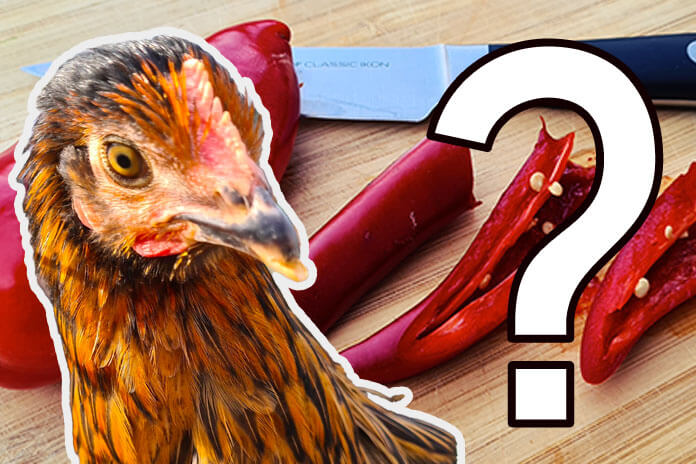 If you toss away spicy pepper scraps in the bin, it might be time to reconsider because chickens can eat spicy food. In fact, they can tolerate much more than humans. But can they taste spicy food, is it healthy for them, and is it a good idea to feed them with spicy food?

Let's have a look.

Yes, chickens can eat spicy food. Birds lack the capsaicin receptors that burn our tongues and make us break a sweat. They can eat hot peppers and they won't get sick.

Only mammals suffer from spicy food. The hot capsaicin in peppers is a defense mechanism of the plant to repel mammals and attract birds. Birds disperse the seeds of the savory fruit by knocking them from the stems, cones, and flower heads when they are eating.

That's why chickens can perfectly enjoy hot food like chili peppers, cayenne, tabasco, jalapenos, and habaneros. They won't get sick of it either.

Now here is an interesting fact.

The VR1 vanilloid receptor in humans is actually not intended to taste spicy food. It is designed to detect noxious heat, a defense mechanism to prevent us from burning. We have plenty of them in our mouths and tongue to stop us from swallowing hot potatoes.

As a coincidence, these receptors also react to capsaicin, giving us this burning, painful sensation. Our nerves signal to our brain that there is abundant heat as if we were sipping boiling soup.

It's all an illusion. Spicy food isn't hot at all.

Since chickens don't have these vanilloid receptors, they are not affected by any heat sensation. Their wattles won't turn red, and they won't run to the pond to dip their head. They can eat the hottest peppers as if they were cucumbers.

Is spicy food healthy for chickens?

The fact that food is spicy does not really matter for the health of your chickens. The capsaicin that makes the food spicy is not being digested and is excreted in the droppings. Since chickens lack capsaicin receptors, they are not affected by hot food.

So it depends on what you are giving them. Red peppers are healthy fruit, but some kitchen scraps might not be that healthy.

For example, jalapenos come with high amounts of vitamin C, B6, E, and vitamin K. They are a good source of micronutrients, minerals, and oxidants. But if they are mixed in a Tabasco hot sauce with onions, sugar, and alcohol, it's a fool-proof way to get them sick.

However, don't go all-in with the pepper plants. The green parts, stems, leaves, and flowers contain solanine. Solanine is a poisonous substance typical in all nightshades, including hot peppers like jalapenos and habanero peppers.

What are the advantages of chickens eating spicy food?

You might have heard about some of the advantages of spicing up chicken food. Some of them are debated.

Let's take them one by one and see whether these statements hold some truth in them.

Spicy food keeps the rodents out

Mice and rats have capsaicin receptors and sprinkling some cayenne over the chicken food will deter rodents from eating it. The repelling effect is, in essence, why plants produce capsaicin.

You want to keep rodents out as much as possible to prevent them from eating and contaminating the chicken's food. They can also bring in severe diseases like Newcastle Disease.

The capsaicin that is making the food spicy will give the egg yolks a darker color. A scientific study in 19999 describes that adding red peppers with high levels of capsaicin as a food supplement increases the level of carotenoids in the egg yolk. Carotenoids are natural color pigments in the orange-red range.

The study also added that consumers preferred dark-colored egg yolks. Later studies confirm that the red pigmentation in egg yolks is higher when capsaicin is added to the chicken's diet.

Spicy food as a natural antibiotic for chickens

Several studies report the antibacterial effects of capsaicin supplementation in poultry food. Antibiotic additives in poultry food used to be mainstream, but it's much less commonplace with recent regulations. There is a lot of scientific research going on to search for natural alternatives, like hot peppers, garlic, and onion extracts.

Adding red pepper extract will reduce the reproduction of the E. Coli bacteria. Researchers believe it has a positive effect on the chicken's microbiome.

Can spicy food be used as a dewormer for chickens?

No, spicy food can not eradicate parasitic worms in chickens and is not a natural dewormer. Although worms have TRPV (VR1) receptors, they don't have the same chemosensation as us. They are not bothered at all by the hot capsaicin in peppers. However, capsaicin creates a healthy bacterial environment that discourages worms from nestling in the guts.

You might even encounter parasitic threadworms inside of a jalapeno. So while you can fight some parasites with pepper spray outside, you can't deworm a chicken by feeding it with hot peppers.

There are multiple convincing observations in the field to believe spicy food can upregulate egg production in laying hens. Since 2021, there is also some scientific evidence that dietary supplementation of capsaicin improves egg production in ducks. Most people report improvements in the winter and penned hens.

That said, an equal amount of people claim they did not see any results or improvements. Different observations could well result from different dosages and environmental conditions like temperature and housing conditions.

One theory is that capsaicin in spicy food will improve the microbiome, blood circulation, and body temperature. The overall effect would be that the chicken has more energy left for laying eggs.

However, all these theories are speculative, and only compelling scientific evidence in the future can tell us whether spicy food has an effect or not. For now, we certainly can't rule this out as an old wife's tale.

No, spicy food will not make the eggs taste spicy. The capsaicin that is making the food spicy is excreted via the chicken's droppings and does not end up in the yolk. It will, however, darken the yolk.

Chickens can eat hot spicy food without any problem as they lack the receptors for capsaicin, the chemical that makes food spicy. Adding small supplements of peppers seems to come with some health benefits. They can serve as a natural antibiotic and might even improve egg-laying.

Spicy food can't be used as a natural dewormer, but it discourages worms when used as a preventive measure. It can make the egg yolks darker, and most people prefer the dark rich orange color.