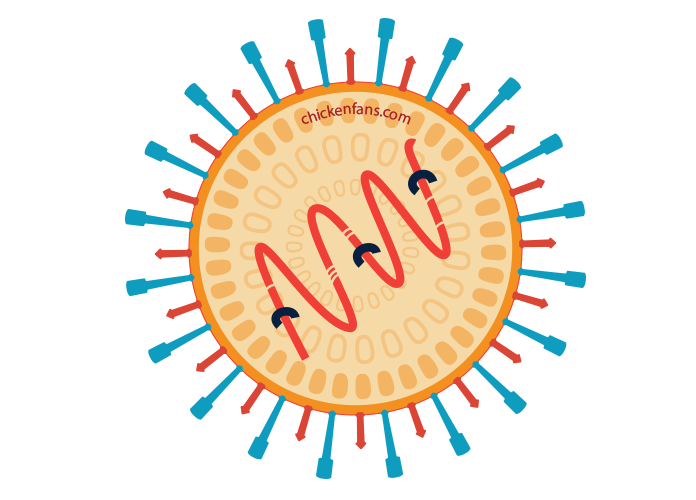 Newcastle Disease in chickens is one of the top 5 causes of death in the poultry industry worldwide. In the USA, Canada, and Western Europe, the virus is phased out, but there are still outbreaks once in a while. In other countries, the virus is still very active and is depopulating multiple flocks, despite a variety of vaccines available on the market. Unfortunately, there is no treatment.

Should you be worried? What can you do? Let's find out.

What is Newcastle Disease?

Newcastle Disease is a widespread, highly contagious disease caused by the paramyxovirus. It targets chickens and many other birds.

There are various strains of the virus circulating, and some will incur mild symptoms, whereas virulent strains can wipe out entire unvaccinated flocks. In acute cases, birds can die very rapidly.

It's a worldwide virus that's ever-present at a baseline level and pops up now and then. It's a notifiable disease, so there is a duty to report Newcastle Disease outbreaks.

The symptoms vary a lot depending on the virus strain causing the disease. One or more of the following body systems are attacked:

Most infected chickens will show respiratory problems such as:

Newcastle Disease is well-known for the effects it has when it attacks the nerves in the chicken's body:

Since the digestive system is put under pressure, you can also notice:

Many chickens will only show mild signs of general illness and exhaustion, especially for mild virus strains or when the birds are vaccinated. In laying hens, there is a sudden egg drop.

Generally, it takes about 6 days to see some signs of infection, but it can take up to two or three weeks in some cases. In severe cases, the virus may result in sudden death without the sign of any clinical symptoms. Vaccinated birds can be asymptomatic but can still pass on the virus to other chickens.

The severity of Newcastle Disease

Since there are so many strains, there is a classification to express the severity of the virus:

In some countries in the world, like the USA, Canada, and most West European countries, the virulent strains of the Newcastle Disease Virus are controlled. But still, they pop up from time to time due to infections passed on by pigeons and cormorants. Imported parrots also carry the virus frequently and are a source of infection for chickens.

When the virus has entered the flock, the other chickens become infected after a couple of days. Virulent strains spread in many ways to infect other chickens in the coop and are passed by:

The virus spreads a bit slower for strains that are only passed on via the chicken's droppings. In those cases, it can take up to two weeks before the full flock is infected. Young birds are especially sensitive to the disease.

Survival of the virus outside the chicken

The virus can survive multiple weeks in the chicken coop and run and is resistant when embedded in the dirt. However, it will break down in direct sunlight due to UV radiation.

There is still some debate about whether the virus can be passed through the eggs. There are some reports from scientists and convincing observations in the field to believe so. However, it's still possible that baby chicks are only infected through their environment or via dirty eggshells.

To be safe, the Terrestrial Code of the OIE prescribes a quarantine period of at least 21 days for the export of chicks hatched in Newcastle Disease-free countries.

Unfortunately, there is no treatment for Newcastle Disease yet. Since it's caused by a virus, antibiotics won't help. Sometimes antibiotics are prescribed to prevent any secondary infections that can occur when the birds are weak.

Some research reports that there are multiple benefits of adding vitamin supplementation to chicken food:

It is also possible to vaccinate for Newcastle Disease.

Vaccines have been available since 1930, four years after the initial outbreaks of Newcastle Disease in Indonesia and Newcastle.

The first vaccines were based on a weakened version of the virulent Newcastle Disease virus. At the end of the 20th century, vaccines rapidly progressed with new techniques available. There is currently a variety of vaccines on the market:

Although the vaccines are effective, they can't seem to control the worldwide spread of the disease. Several countries report multiple outbreaks per year. The problem is that every vaccine has certain limitations:

To overcome these issues, vaccination is frequently rolled-out in a vaccination program that encompasses multiple interventions at different ages and with several vaccines. Programs are designed based on local environmental circumstances.

The advantage of using the Newcastle Disease Virus is that it can be manufactured at a large scale and low cost using embryonated chicken eggs.

In countries that almost ruled out frequent outbreaks, like the USA and Western Europe, vaccination is based on the mild types of the virus strains. In high-risk areas around the world, more aggressive vaccines are common practice.

However, even in well-organized, highly secured poultry farms in the USA, lab tests frequently show that birds still carry viral antigens. So even with extraordinary biosecurity measures, the disease is still spreading through wild bird populations, backyard poultry, and small-scale homesteading.

Since vaccination can not guarantee the complete elimination of the disease, it's essential to practice good biosecurity.

When managing a backyard flock in high-risk areas for Newcastle Disease, there are some measures you can take:

Even if you live in lower-risk areas, you should be alerted when you hear news about outbreaks.

Although vaccination did not rule out the Newcastle Disease worldwide, some countries almost completely phased out the disease. However, it's not entirely eradicated, and the virus pops up now and then.

Countries where Newcastle Disease is of low-risk include:

Australia is free from severe strains but has seen some outbreaks in commercial flocks. The disease is a problem in Indonesia and Timor-Leste, close to Australia.

Many countries still struggle with the disease and frequently suffer from plagues. The virus is an omnipresent threat to poultry and backyard chicken owners.

Locations where the virus is still prevalent include:

In these countries, getting your chickens vaccinated against Newcastle Disease is essential. The virus is re-emerging in countries such as Mexico, Colombia, Venezuela, and Peru.

Is Newcastle Disease contagious to Humans?

Yes, the virus causing Newcastle Disease can infect humans. The infection is much less severe than in birds and only causes mild flu-like symptoms, eye infections, and throat infections. However, these symptoms are rare, and most human infections are asymptomatic.

The eye infection is only pink eye, an inflammation of the transparent membrane that lines your eyelid and eyeball. It's very rare, and the condition is entirely benign.

The fact that this virus is rather innocent in humans has made it an excellent host for cancer treatment.

How is Newcastle Disease Virus relevant for Human Cancer Treatment?

Although it can be fatal for chickens, Newcastle Disease Virus has only mild symptoms in humans. It's researched for cancer treatment because the virus can replicate faster than cancer and prefers killing cancerous cells.

In 2020, Bhurman B., an oncologist at the New York Cancer Center, describes the role of the Newcastle Disease Virus as a frontrunner in immunotherapy. With modern techniques for genetic engineering, new methods emerge to modify the virus to enhance its immunogenic potential. More research is currently being conducted to understand how the virus affects the immune system and can be used to target a variety of cancers in humans.

The first outbreak of Newcastle Disease was in 1926 in Java, an island in the center of Indonesia. However, the disease is named after its outbreak in 1927 in Newcastle-upon-Tyne in England. The virus was probably already affecting chickens multiple years before these outbreaks, as they got infected by wild birds.

In 1964, researchers started to investigate Newcastle Disease Virus as a cancer agent.

For decades, the virus has been one of the biggest causes of worldwide losses in the poultry industry. Up until today, it's in the top 5, together with avian influenza and avian bronchitis, despite the availability of multiple vaccines and vaccination strategies.

Newcastle Disease Virus is a contagious disease that is still a worldwide threat to the poultry industry and backyard chickens. Vaccination has phased out the disease in many countries, but the virus is still omnipresent despite all vaccination campaigns. There is no perfect vaccine yet, and most vaccines must overcome some complexities. New vaccine development is showing promising results in terms of efficiency, ease of management, and application.

Since it's a virus, there is no treatment yet, but vitamin supplementation boosts the immune system of chickens to fight Newcastle Disease. Apart from vaccination, practicing good biosecurity is key in preventing the disease.

Being fatal for chickens, the Newcastle Disease Virus can also affect humans but only comes with mild symptoms. It's actively researched as a cancer medicine as it has the remarkable ability to attack cancerous cells and replicate faster than cancer.