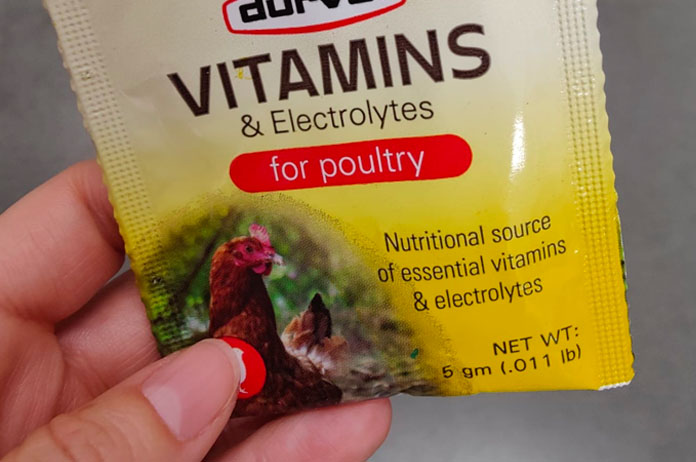 Vitamin K is an essential vitamin for the metabolism of chickens. It regulates blood clotting and bone health. Optimal values will improve egg laying and growth.

But what are the optimal values? When should we be afraid of deficiencies, and how can we recognize them? And why should you care?

Vitamin K is a group of 3 chemicals essential for blood clotting, biosynthesis of proteins, bone composition, and embryo development in chickens and poultry. Adequate intake improves laying performance and health. Deficiencies can result in internal bleeding and blood spots in the eggs.

The prime function of vitamin K is to regulate bioprocesses for blood clotting. It is vital in regulating multiple blood clotting factors, such as prothrombin, protein C, and other coagulation factors. Continuous intake for chickens is essential to activate clotting in various circumstances such as:

Vitamin K plays a role in producing principal proteins that regulate bone metabolism. One example is osteocalcin, which plays a crucial role in calcium binding in the core of the chicken bone, the uterus, and the eggshell. High levels of osteocalcin increase bone density and reduce the risk for osteoporosis.

When osteocalcin is not bound to calcium, it acts as a hormone. Birds under stress release osteocalcin from their bones in a fight-or-flight response.

Types of Vitamin K for Chickens

There are three types of Vitamin K:

A chicken produces its own vitamin K2 from bacteria in the intestines. However, most of it is made in the last parts of the guts and can't be absorbed by the body. Instead, it ends up in their droppings, which contain relatively high levels of vitamin K. It's actually so much that it becomes an important source of vitamin K for chickens that eat their droppings in the chicken run.

Our birds do not produce enough microbial vitamin K in their guts, and they need supplemental feeding. This is especially true when they are on antibiotics, which kill the intestinal flora that produces vitamin K2.

These are the optimal values for health, growth, and egg laying performance. Higher values are only needed in exceptional circumstances, such as disease. Very high doses won't harm as it's virtually impossible to overdose on vitamin K.

Lower intake can be suboptimal but does not necessarily mean there is a deficiency. The minimum requirements to prevent symptoms of deficiency published in Nutrient Requirements of Poultry (National Research Council) are as low as 0.5 to 0.7mg/kg of vitamin K for chickens.

Some breeding companies publish their own guidelines, which are in line with the general recommendations above:

Vitamins are organic compounds that can deteriorate and lose their vitamin activity. Although a lot of feed contains vitamin K, the stability varies depending on the type of food. There is a difference between pure commercial feed, vitamin-mineral mixes, or raw materials. Some broiler breeder premixes will only retain 66% of the vitamins after three months of storage.

Vitamin K is especially sensitive to:

Raw materials are much more susceptible compared to industrial-manufactured vitamin K. The industrial processes for premixes and laying feed protect the active chemicals during manufacturing and storage. They add antioxidants and micro-coating to prevent oxidation of the fat-soluble vitamin K.

Vitamin K levels in natural food sources vary depending on several factors such as the harvesting conditions, use of fertilizers, genetic modifications, and agricultural practices such as crop rotation.

The bioactivity of vitamin K in chickens can be impaired by:

Vitamin K is a fat-soluble vitamin. When chickens digest vitamin K, the organic compound must compete with other fat-soluble vitamins, like A and E, to compete for the available spots. High levels of vitamins A and E will impair the bioactivity of vitamin K in chickens. Excessive amounts will affect blood clotting, which can suddenly take twice or thrice as long.

Prolonged use of antimicrobials affects the microflora of a chicken and prevents the composition of vitamin K in the guts. The most significant drug is sulfaquinoxaline, an antibiotic used to treat Coccidiosis and Fowl Cholera. When treating chickens with Amprolium and Sulfaquinoxaline, it's common to supplement with vitamin K.

Aflatoxins are a family of toxins produced by fungi found on common staple foodstuff. The molds grow on hay, corn, wheat, chili peppers, tree nuts, seeds, and almost any crop of food and soil.

The vitamins in a laying hen's diet directly affect the number of nutrients in the egg. If you want to hatch an egg, vitamin requirements are much higher than for table eggs. Sufficient vitamin levels give the embryo a much higher chance for survival and reinforce the post-hatch growth of chicks.

For chickens raised for meat, low levels of vitamin K are associated with the presence of blood and bruises in the carcasses. Bruises and blood spots can occur in all types of muscles.

Blood in chicken meat results from hemorrhages, which is blood loss from damaged blood vessels. They can be caused by extreme environmental conditions, electrical stunning, harsh muscle activity, and everything that can inflict trauma on the muscles. Another problem is the occurrence of petechiae, small round spots on the skin that result from bleeding.

All these symptoms can be linked to capillary fragility caused by marginal deficiencies in vitamin K. With any impaired activity of vitamin K, the blood clotting process takes much longer, ultimately resulting in visual quality defects.

Article §70 in the United States Classes, Standards, and Grades for poultry (AMS70) specifies that bruises and blood clots are quality defects that must be removed from the meat. The Poultry Grading Manual of the United States Department of Agriculture only permits bruises in the flesh if there is no clotting of blood cells. Small clots in the skin can be cut to allow blood extraction with water during the chilling process (leach out).

Immersion chilling involves immersing carcasses in an ice water mix. Evaporate air chilling is a combination of cold air blasts and water misting. Both can extract small blood spots, but the cuts must be considered when determining the meat's quality. Dark blue or green bruises in the chicken are never allowed and must be removed before grading.

It's not uncommon in meat chickens to see supplementation with high vitamin A and E levels or antimicrobial supplementation in the chicken's diet. Both affect the vitamin K levels and have repercussions on the coagulation time, resulting in blood clots and bruises.

Studies in china on broiler chickens showed that vitamin K improves bone development and feed efficiency. Supplementation of 8 mg/kg improved growth performance during weeks 6 and 7 and bone quality, right after hatching, during weeks 0 to 3. They suggest 8 mg/kg for starters and 2 mg/kg for grower and finisher phases.

Due to excessive selective breeding for fast growth, some broilers have genetic predispositions for skeletal issues. Vitamin supplementation can partially overcome these issues, and feed additives can alleviate the impact.

Chickens with a vitamin K deficiency suffer from chronic reduced vitamin K levels below the absolute minimum to cover their body's requirements. The chickens' minimum vitamin K intake is around 0.5 to 0.7mg/kg.

Shortage can be caused either by improper diet or the presence of antagonists like antibiotics or other fat-soluble vitamins, like A and E. For small deficiencies, symptoms only show up after two to three weeks.

Symptoms of vitamin K deficiency in chickens can be:

When vitamin K deficiency co-occurs with a disease, it can worsen the effects of the disease. For example, in coccidiosis, the intestinal linings of the chicken's guts can be so damaged it reaches the underlying blood vessels. Vitamin K is essential in blood clotting and restoring the body's tissue, and deficiencies or sub-optimal vitamin K levels can lead to excessive blood loss.

Most commercial rat and rodent poisons are anticoagulants and deplete the rodent's body from vitamin K. They primarily interfere in the vitamin K cycle by blocking blood clotting factors like prothrombin and proconvertin. Extra toxins in the poison wreak havoc in tiny blood vessels, causing constant internal bleeding.

Eating rat bait can cause vitamin K deficiency and make your chickens prone to internal and external bleeding. It's a gradual process where the birds ultimately collapse after a week or two. They die from excessive blood loss (hemorrhagic shock) or reduced oxygen flow to the organs (anemia). A terrible and arguably inhumane way for your birds to die.

The antidote is to give the birds very high concentrations of vitamin K1. This limits the amount of internal bleeding caused by the toxins in the poison so that the bird can survive. Active charcoal is only effective in the first hours after ingestion.

Since clinical signs show up after a couple of days, there is time to start treatment if you find out your chickens have been eating poison. Unfortunately, only vitamin K1 can be used as an antidote because it's absorbed early in the intestines. Vitamin K3 from the drug store is inappropriate for treating rodenticide poisoning in chickens.

Chickens can also get sick when they eat from poisoned rodent carcasses. If you are using rat poison, regularly check the run and coop and remove the rodent carcasses immediately.

Vitamin K2 can only be found in animal-sourced foods like cheese and fermented plant foods like soybeans in nattō.

Some herbs like oregano and parsley also contain high levels of vitamin K. Although generally safe for chickens, herbs like parsley can be harmful in abundance and disturb eggshell formation. There is a reason why they are toxic to dogs and cats.

When feeding chickens with vegetables, make sure to wash them properly. Vegetables such as spinach, kale, collard, and mustard greens are high in vitamin K but also in the top 3 on the 2022 Dirty Dozen list of the Environmental Working Group (EWG). This list contains all the fruits and vegetables that are cultivated with the most pesticides based on USDA data.

The problem with pesticides is that they can stick, even after the product is washed. The toxins in pesticides are particularly harmful to chickens. If you want to add vitamins to the diet, buy organic vegetables to avoid pesticide consumption in your flock.

When do you need to increase vitamin K levels?

Some diseases can wreak havoc on body tissue and internal linings of organs. Vitamin K is essential for chickens suffering from diseases with internal bleeding and tissue damage like coccidiosis which damages the gut's intestinal linings. The required vitamin K level for coccidiosis is 8mg/kg, two to four times higher than the recommendation.

Any situation affecting a chicken's microbiome can impact the intestines' construction and absorption of vitamin K. This can be antimicrobial medication like Sulfaquinoxaline, but also something as simple as heat stress.

Vitamin K is an essential vitamin for blood and bone health in poultry. Chickens synthesize vitamin K2 with bacteria in the guts, but that's far from sufficient. Vitamin K additives in the feed and supplementation are vital for the metabolism of a chicken.

Many dark green leafy vegetables contain high levels of vitamin K1. Check your food's safety before feeding your chickens with table scraps and leftovers. Vegetables such as spinach, kale, and collard are high in vitamin K, but they also made it to the top 3 in the Dirty Dozen list of pesticides.

Chickens need higher vitamin K intake when they suffer from diseases, have high vitamin A or E intakes, are treated with antimicrobial medication, or are under any stress.