Do Cats And Chickens Get Along? 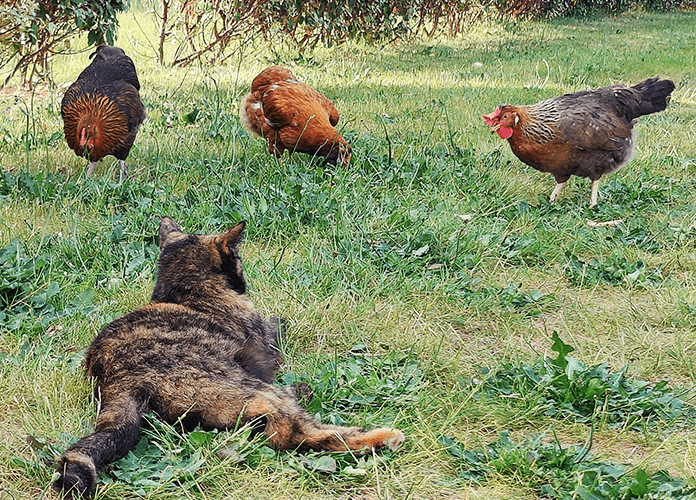 We are all big animal lovers here at Chicken Fans, so we understand the need to shelter and raise as many animals as you possibly can. But keeping various animals together to live in total harmony is a myth. Some breeds don't get along, or worse, they could kill each other while fighting over their territory or simply following their instinct.

Before introducing new animal breeds on your property, better to be safe than sorry and make sure they're a good match.

Can you keep chickens when you have a cat?

As adult chickens and cats are nearly the same sizes, chances are they're not going to be significant issues introducing them to each other. We all know cats are carnivores and hunters, but they prefer smaller prey such as mice, rats, or small rabbits. A full-grown chicken is too big for cats to bother with, and both hens and roosters can be pretty feisty when defending themselves.

But be careful placing cats in the proximity of chicks.

Chicks are much smaller and defenseless, so they are an easy target to all kinds of predators, even house cats. Never leave chicks unattended while your pet cat (or dog) is in the area, as they might be mistaken for a tasty lunch. All it takes is one hungry cat in hunting mode. When raising baby chicks, you have to be careful to keep them safe at all times and don't let them go outside too early. Consult our 'Chick Raising Guide' when in doubt.

Can Cats And Chickens be friends?

It's no problem to keep chickens and cats in the same garden after introducing them properly. But that doesn't mean they'll get along or become friends. Like all animals, it depends on their personality. Realize that chickens and cats probably won't get further than 'acceptance' or 'tolerance' to each other. Both animals sleeping and cuddling up next to each other can happen, but it's not that common.

How to introduce cats to chickens?

Whether you had your chickens first and decided to have a cat afterward or the other way around doesn't matter. Introducing new pet members is always exciting. But, in the case of cats and chickens, it's not important which animal came first.

Install a fence (at least 6 feet high) to keep your chickens safe and ensure your cats can't come inside the chicken run. At least not at first. If you want to free-range your chickens, do it after they get to know other pet animals to prevent stressful encounters.

We'll guide you through the most common steps in the process. But depending on the character of your pet cat or backyard chickens, you maybe won't have to go through every step of the way.

If your cat still has a strong hunting instinct, she'll likely keep small predators (like rats) away from the chicken coop. Or they chase away birds that feed on your chicken food and bring diseases.

Don't expect too much from domesticated housecats as their hunting skills never fully developed.

Yes, you can keep both cats and chickens perfectly, even when free-ranging. They'll probably accept and tolerate each other very soon, but that doesn't mean they'll be BFFs. Take your time to introduce your cat to the chicken flock, using some wire to keep them apart at first. Don't rush things, and they'll be fine.