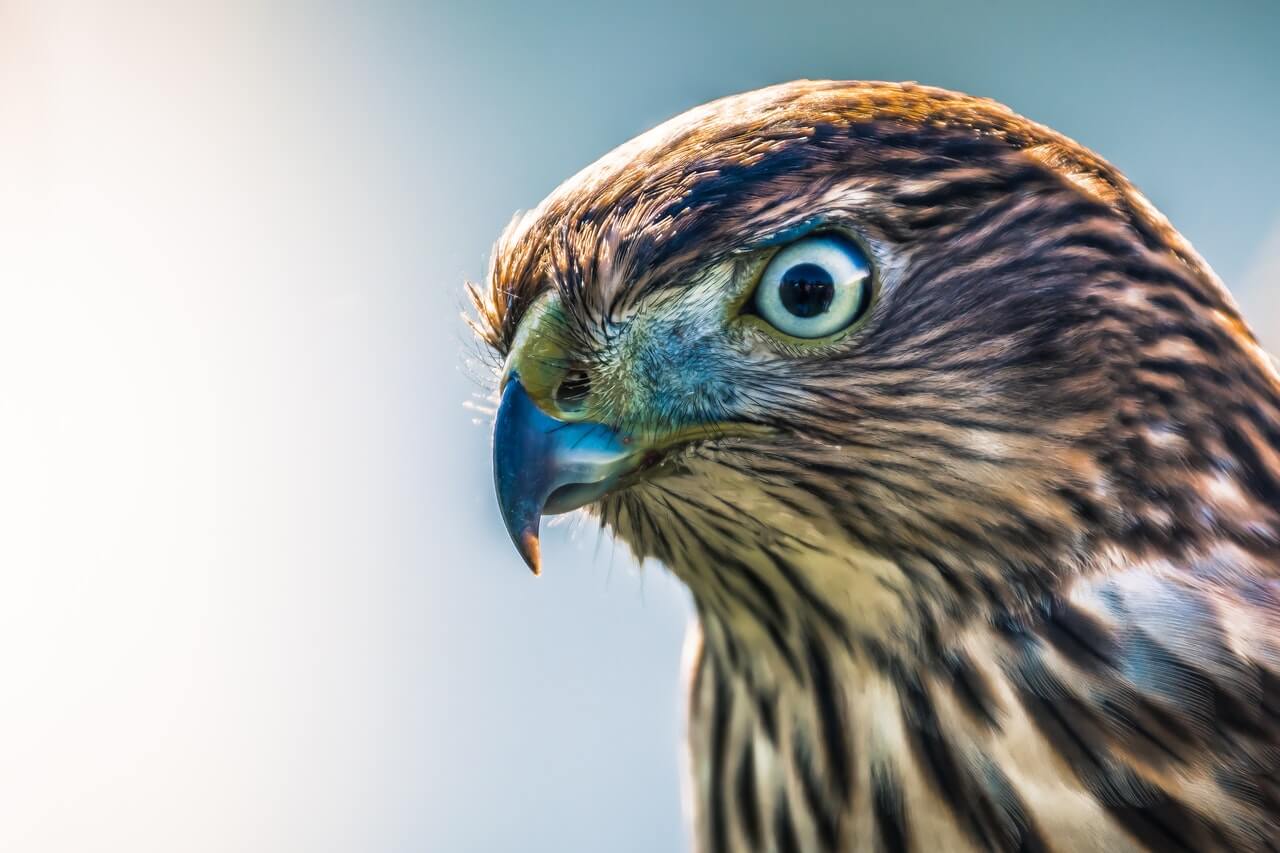 Unfortunately, there are various kinds of predators who are after your chickens. And once they've discovered the chicken coop, chances are, they'll keep on coming until all your chickens are dead.

In this article, we'll guide you through the most common predators and how to recognize the animal that's terrifying your backyard chicken coop. We also give some tips to protect your chicken flock so it won't happen again.

As spring arrives, many animals start wandering around looking for food, including some predators. Imagine the horror after waking up; you start doing your backyard chicken coop chores, only to find out your flock was attacked by a nighttime predator. You might be confronted with scattered feathers, wounded chickens, or even worse, no chickens at all.

All predators use different hunting methods, so your chickens or coop will look different depending on the kind of animal. When the chicken coop gets attacked, always try to find out what animal was responsible for the ambush. We'll try and help you on this one.

Later in this article, we'll tell you all about predator-proofing your chicken coop, although it's nearly impossible to keep the outdoor area 100% predator-proof. But the critical element is to keep your garden pets as safe as possible.

What predator is killing my chickens?

We make a distinct difference between the two kinds of predators. You can rule out one category when the attack occurs and focus on the other.

Dogs are probably the most common daytime predators for backyard chickens. They should be kept on a leash, but we all know that's not always the case. All dog lovers, myself included, would say, 'my dog would never do such a thing.' Well, they do. Never underestimate the hunting instinct of any animal, even domesticated dogs.

Signs of a dog attack are scattered feathers, possible signs of blood or chicken carcasses nearby, dog footprints. To protect your chickens, always keep them inside a fenced environment. An electric dog fence can be an option if you own a dog and don't want him to go too close to the chicken coop.

Hawks, eagles, and falcons are aerial predators who hunt during the daytime. They have perfect vision and see everything, such as small animals like rabbits, chickens, mice, or fish.

They've got two hunting styles; if you have normal-sized chickens, they will probably catch, kill and eat their victim inside the chicken run. When you have smaller chickens like bantams, chances are they carry them off and fly away to a safer location to eat the chicken later.

Possible signs of the visit of a bird of prey can be little scattered feathers or centralized wounds where the bird was picking. If birds of prey are common in your area, you can protect your chicken flock by installing an enclosed and covered fence.

Weasels are small predators that are most active during the day but sometimes also hunt at night. They never kill an entire chicken flock to eat or carry away all chickens. No, they kill for a light snack and leave other animal carcasses be. You can therefore recognize a weasel attack by intact chicken carcasses inside the coop, with bite marks in their necks or sometimes a wholly bit of head.

As weasels are small animals, it's not that easy to weasel proof your chicken coop. Make sure you thoroughly check the fence for holes or gaps.

Foxes are mammals that hunt from dusk to the early morning hours. They are opportunistic hunters, so if they come across a chicken coop with 20 or more chickens, they will kill as many animals as possible and keep the leftover carcasses to bury them later.

Foxes are very smart, so it's not easy to spot a fox attack on your chicken coop as they leave as little evidence as they can. The fox's intent is never to leave carcasses behind, so if they do, it's likely the fox was unable to carry all the remaining carcasses.

So fox attacks are more challenging to identify, but you can look for footprints or tiny feathers scattered around. You can keep the chickens safe by ensuring your chicken fence is strong enough because foxes can chew through ordinary chicken wire. The wire should be 4 to 6 feet high with a buried bottom. You can also start thinking about an electric fence.

Coyotes (and wolves) hunting methods are similar to dog hunting, only without the domestic/human aspect. They tend to hunt at night. Luckily, coyotes are afraid of humans, so they can be easily scared when caught red-handed.

Coyotes hunt in a group and will attack and kill your chickens by biting them in the neck and shaking them violently until they collapse. Afterward, they take their pray elsewhere to eat. To protect your flock from coyotes (or wolves), you must install a decent, high, thick fence.

Raccoons, skunks, and opossums are all smaller nocturnal animals who'll hunt your chickens during nighttime. They also aren't just interested in your chickens, but also their eggs.

Skunks and opossums are lazy hunters; they will go first for the eggs and, maybe when disturbed, go after your chickens. They tend to leave chickens wounded but alive.

Raccoons are vicious hunters who can make your chicken coop look like a massacre took place. They will kill your chickens but won't eat them. It's almost like they get bored with one dead chicken and then go on to the next.

Primarily active during the night, snakes can be dangerous for all small animals (and their eggs). So when you live in a region where snake attacks on chickens occur, always keep an open eye on your chicken coop as they tend to house in unused nesting boxes.

Wild cats are excellent hunters and can hunt and kill your chickens, even when other food sources are available. However, this is not very common; they rarely attack full-grown chickens. When the chicken coop is located in an area with loads of wild cats, and you have young hens or chicks roaming around, it's always a good idea to secure the chicken coop.

As mentioned before, some predators visit the chicken coop for the eggs, not the hens. That doesn't mean they don't hurt or wound the chickens; some do. But they're just not the natural-born killers like coyotes or hawks.

Chicken eggs are a tasty snack for most animals, so it's not that weird that predators snatch eggs from the coop. When it comes to making a complete list of animals that steal or eat chicken eggs, it can get extensive, so we'll narrow it down to a top 5.

You should realize that chickens also love the taste of their eggs. As long as they don't find out, there is no problem. Egg breaking is the main reason hens begin eating eggs, and it's tough to stop that bad habit. So before blaming predators for the empty or missing eggs, try to catch a chicken red-handed. They will probably start eating immediately after the egg-laying.

How can I protect my chickens from predators?

The outside area, also known as the chicken run, is where all the chickens hang out during the daytime. As mentioned before, there are two kinds of predators, nocturnal and day animals, so we must ensure that both chicken coop and run are protected.

It's impossible to make a chicken run 100% predator-proof, but you can make it much harder for an animal of prey to get close to your chickens. There are two main things you'll have to do. First, secure the chicken run so no daytime predator can come nearby. And second, protect your chickens during dusk and nighttime inside the chicken coop by locking it as much as you can. We'll give some tips on how to do this.

Don't use chicken wire as a fence.

First of all, never trust on chicken wire to keep predators outside the chicken run. Several predators can chew through the wire as it is not very thick or strong. A raccoon or a fox can quickly get inside the run by chewing their way through the chicken wire. Electrified fences could also be a solution.

Many predators such as wolves or coyotes dig holes and crawl under the fence. Dig a 10 to 12-inch trench around the chicken run by puncturing the ground with a shovel and wiggling it back and forth. Shovel with by shovel with; you'll create a thin but shovel deep trench big enough to place the wire or hardware cloth.

Install hardware cloth around the fence

To keep small predators outside, like weasels and snakes, you must secure your outside fencing with a hardware cloth and cover any opening bigger than 1/4 inch.

You can cover the run with a roof or hardware cloth to protect the flock from flying predators such as hawks and eagles. Ready-made walk-in chicken runs with a roof can also be purchased online.

There are tons of gadgets available to keep predators away from your chickens. Most common are automated alarm systems with motion sensors. They'll frighten the predator with bright lights and loud sounds when they walk by the motion sensor.
Solar-powered animal repellants are also used to scare predators and can be used during the daytime.

A chicken coop is an inside space for chickens to sleep and lay eggs. They're most vulnerable at night so let's try and keep them as safe as possible by addressing the four topics below.

Chickens are most vulnerable during nighttime when they sleep, so the chicken coop should be a haven for them. Let's try and make the coop as predator-proof as we can!

Don't allow your chickens to roost outside the coop

It makes perfect sense but is sometimes forgotten. Most predators come at night, so their safest place is inside a secured chicken coop. If your chickens don't habit of going inside the coop at dusk, you can quickly train them to do so.

Close your coop at night to keep predators outside. Usually, hens and roosters go inside the coop at dusk, so there is no reason to keep the coop door open after the sun has set. Of course, you'll have to re-open the door at dawn. Oblivious chicken owners can install an automatic chicken coop door. That way, you won't have to get up early in the morning, or you can't forget to open the coop door.

There are various kinds available (with timer and/or wifi, solar-powered,...), so you can choose the perfect one for your needs.

Keep all food inside the coop

Food attracts predators. So if you don't want them near your chickens, keep all food inside the coop or use an automatic chicken feeder which conceals food.

It's never easy to protect and secure your chickens, and unfortunately, 100% predator-proof does not exist. As we get more intelligent by installing new gadgets and tools, so do the predators. If you should have any more tips on how to keep animals away from the chicken coop, please comment below.