Home > Eggs > Fairy Egg: All You Need To Know
Eggs

Fairy Egg: All You Need To Know 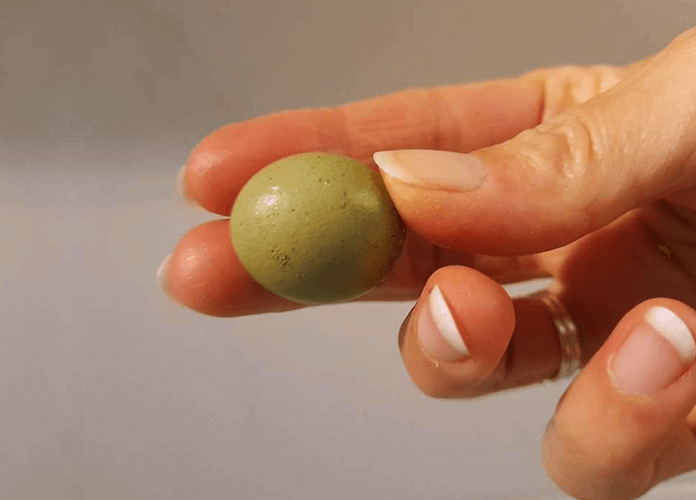 Have you ever heard about fairy eggs? Or maybe you like to call them wind eggs, rooster eggs, or fart eggs? Let's explain what the deal is with these little fellas. Are fairy eggs uncommon? What causes a chicken to lay a fairy egg? Is it a sign of illness or nutrient deficiency when a hen lays a fairy egg? Or maybe you are wondering whether you can incubate a fairy egg?

Let's get started and tell you all about the tiniest eggs in your chickens' nesting boxes.

What Are Fairy Eggs?

Once your hens are old enough to start laying, chances are, during their lifetime, they'll lay some abnormal-looking eggs. They can lay weirdly shaped eggs, soft-shelled eggs, eggs with a strange texture, or fairy eggs.

Fairy eggs are very tiny eggs, usually without the yolk. They come from a hen that lays regular-sized eggs but, due to an error in the egg-making process, lays a tiny, yolkless egg instead. During fairy egg-making, the albumen gets formed before the yolk is released, and the eggshell shapes around only the egg white. Although a yolk inside a fairy egg is possible, chances are relatively low, and it usually looks more like an orange slime floating in egg white.

It isn't that uncommon and nothing to worry about when it occasionally happens. But if your hen is only laying fairy eggs instead of regular-sized eggs, something is probably going wrong.

What causes a hen to lay a fairy egg?

Your pullet starts laying eggs somewhere between 18 and 25 weeks old depending on the breed. Some take a little less time, and some take more time. But eventually, eggs are formed and laid, and you'll find a fresh batch of eggs a couple of times a week.

What to expect from their first egg is hard to predict, but chances are the egg will be much smaller than a regular-sized egg. It can look oddly shaped or maybe has a strange texture.

There is nothing wrong with the egg, so there is no danger in eating the first egg your pullet lays.

Expect weirdly shaped first eggs as the reproductive system and egg-laying cycle are not entirely on point yet. As they are still young, their hormones are still stabilizing. Pullets can even lay two eggs in a single day. So if you are lucky, you might hit a double!

Give it some time, and you'll enjoy regular-shaped eggs in no time.

Most hens stop laying eggs during molting, which is a painful and stressful process. They need energy and nutrients to produce new feathers instead of making eggs.

After molting is over, they'll start laying eggs again because they don't have to focus on growing new feathers anymore. But kickstarting the lay after a period of downtime can make the fresh eggs look a bit weird initially. But don't worry, they'll pick it up in no time.

All breeds have different life cycles, so it's difficult to tell when your hen stops laying eggs. Typical laying hens usually don't age over five years, but some chicken breeds can become as old as 20.

Generally speaking, a hen tapers off egg production after three years of age and completely stops laying after they've turned 6 or 7 years old. Before egg production ultimately comes to an end, older hens are likely to lay oddly-shaped eggs or fairy eggs due to a disturbance in their cycle.

A lack of calcium or protein in your hens' diet results in soft-shelled eggs or 'rubber eggs.' These eggs can be recognized by their fragile shell or the complete absence of an eggshell and are not fit for consumption.

Fairy eggs are shelled eggs but smaller and lack a yolk. Their cause can be brought back to a calcium or protein deficiency. If only one hen lays an occasional fairy egg, it has nothing to do with nutrition. But it's something to keep in mind when multiple hens inside your flock are laying abnormal-sized eggs.

When a hen feels stressed, she'll decrease or stop egg production until she feels better. Multiple issues can cause stress:

Once the hen resumes her egg production, the formation of fairy eggs is possible, but it'll only be temporary, so don't worry.

Fairy eggs aren't uncommon, but that doesn't mean it should be a weekly routine. When you notice a hen frequently lays weirdly shaped eggs or small eggs without egg yolk, this could suggest a medical issue in the reproductive system.

To be sure what's going on, you should consult your vet. It's possible your hen is incapable of releasing any yolks or isn't able to develop the ovum but releases it regularly. She could have underlying health issues, as some illnesses can cause permanent reproductive malfunctions.

If your hen frequently lays fairy eggs, consult your vet.

Can you incubate a fairy egg?

Of course, you can try. But due to the absence of egg yolk in most fairy eggs, the egg is not likely to be fertilized. Even if a yolk is present, the egg itself will not hold enough nutrients to grow a chick.

If you want to try it, you can use our 'Egg Hatching Guide' to get you started.

Can you eat a fairy egg?

Yes. Instead of other strangely shaped eggs, such as soft-shelled eggs, you CAN eat a fairy egg. It doesn't matter whether it's your hen's first egg ever or not. You can eat it without any health risks. However, due to the size and lack of egg yolk, a fairy egg will not be as nutritious as normal eggs.