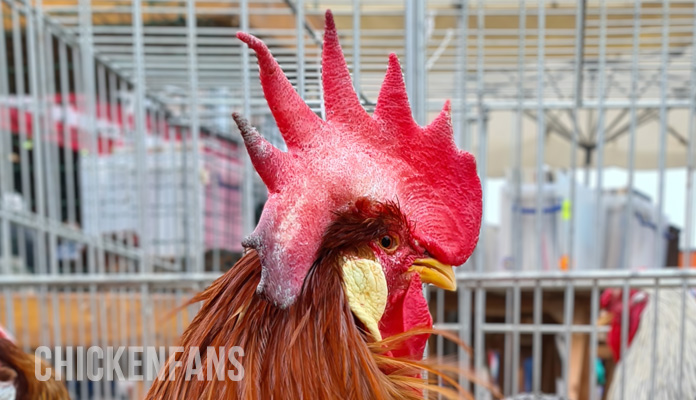 Favus or ringworm is a fungal disease that causes white powdery spots on a chicken's comb and wattles. Although the fungus is rather rare in humans these days, favus occasionally pops up in backyard flocks worldwide.

We discuss the symptoms and how to treat your flock.

What is Favus in Chickens?

Favus or avian ringworm is a fungal infection that starts as small white spots on a chicken's comb and spreads to form large powdery white spots. Chickens usually heal within ten weeks, but in severe cases, the condition can spread to feathered areas and cause respiratory issues.

Symptoms of Favus in Chickens

The symptoms of favus in chickens are:

The infection looks like sprinkled flour on the comb and/or wattles in the early stages. The disease then spreads in circles around infection spots, and the white spots fall off. This results in wrinkled crusts.

Most chickens recover on their own when the disease is left untreated. However, the fungus can spread to the feathered skin. This creates crusty wounds, also known as favus cups.

In severe cases, the fungus can spread to the beak and eyes and cause yellow pus in the respiratory tract.

A veterinarian can diagnose favus by examining spores when culturing a smear of the fungus.

Causes of Favus in Chickens

The condition is caused by the fungus Microsporum gallinae. It's rare in commercial poultry farms but occasionally pops up in backyard flocks.

Chickens get infected when the fungus invades the unfeathered parts of the skin.

The name is based on the appearance of the infection in humans.

Chickens get infected when the fungus invades the unfeathered parts of the skin.

The primary form of transmission is direct physical contact. However, the fungus spreads very slowly. It's not uncommon to see the condition only affecting a single chicken in the flock.

The fungus primarily affects chickens but can infect turkeys and other fowl. It's very rare to see infections in humans, but it's possible. This typically results in honeycomb skin: groups of crusty patches.

Microsporum gallinae is widespread and affects flocks worldwide. However, it prefers warm areas with high humidity.

Treatment of Favus in Chickens

Mild infections of favus normally heal within ten weeks. The chicken coop can get infected, so it's important to separate the birds and disinfect the housing.

To treat mild cases of favus:

You can use an antifungal cream with miconazole, enilconazole, or iodine for severe cases.

The favus fungus was the first human fungal disease ever discovered in 1839. When antifungal creams and sprays got widespread in the 20th century, human infections became rare in most parts of the world.

Although Microsporum gallinae is the most common causing agent of favus, there have been some other fungi isolated that can also cause ringworm. All these fungi are zoophilic: they very much prefer chickens over humans.

The fungus affects all kinds of chickens, whether they are oriental breeds or a backyard flock of game chickens.

Favus or avian ringworm is a fungal infection causing small white spots on a chicken's comb. The infection spreads slowly, and most chickens heal within 10 weeks. The infection can be treated with antifungal creams and rarely affects humans.