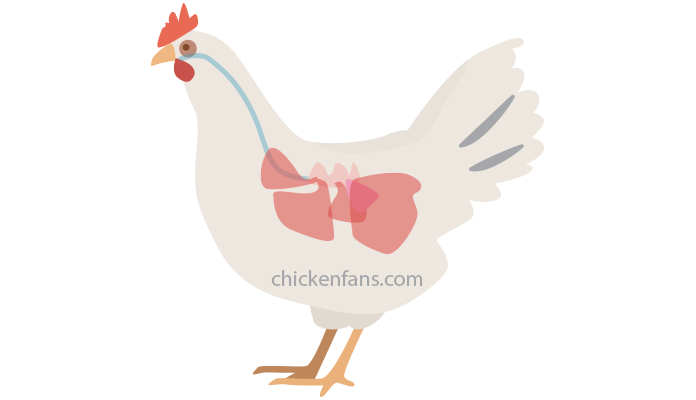 Chickens have an ingenious respiratory system that is quite different from ours. Unfortunately, there are many respiratory diseases affecting backyard chickens.

It can come in handy to understand how a chicken breathes, how the lungs and air sacs work, and why your chicken is panting when it's hot.

We'll cover everything there is to know:

Overview of the Chicken Respiratory System

Chickens breathe through their mouth and nares. The air travels via the windpipe to a pair of lungs, where the chicken absorbs oxygen, just like humans. From there, it travels through air sacs, which look like tiny balloons. These air sacs help to power activity and flight.

The air goes back and forth between the lungs and air sacs. It takes multiple inhalations and exhalations for the air to pass through all the air sacs and lungs. In the final exhalation, the CO2-rich air from the anterior air sacs is expelled back through the mouth.

Functions of the Respiratory System of a Chicken

As chickens are packed with feathers, they rely on their respiratory system for a stable body temperature. When it's hot, chickens breathe faster to get rid of heat. Sometimes this can turn into panting and heavy breathing to cool down.

Chickens have 2 lungs. The windpipe of a chicken splits into the left and right bronchi that lead to both lungs. Both bronchi split into smaller secondary and tertiary bronchi. They form a network of tiny corridors that are all connected. These little pipes reach a cellular level, facilitating oxygen absorption and creating a bridge to the air sacs.

The lungs in chickens are small compared to other animals of similar size. One-third of the lung is sitting between the ribs, so they don't have the same round form as our lungs. They also can't expand like our lungs do.

An adult chicken has eight air sacs, tiny air-filled balloons connected to the lungs via bronchi. Some air sacs connect to hollow pneumatic bones of the skeleton. The hollow bones lighten the bird and help it to fly.

The single clavicular air sac originates from 4 air sacs growing into each other. The pair of cervical air sacs generally join to form a single air sac in adult chickens. So most chickens end up with eight air sacs. The air sacs are not connected with each other, only with the lungs.

The syrinx in the picture above is the voice box of a chicken. The clavicular air sac surrounds the syrinx. Its function is to create sound, both for roosters and hens. When the muscles around the syrinx contract, the air passing through the membranes produces typical chicken sounds.

The function of the air sacs in chickens

The air sacs have multiple functions:

Air sacs don't exchange much oxygen and gas, as they don't have much vascularization, so they only serve as airways. They also don't fully swell with air.

Humans inhale and exhale, and it's as simple as that. Respiration in chickens is a little more complex with their labyrinth of air sacs and bronchi. They need to inhale and exhale twice for the air to pass through the cycle completely.

There are four steps in the respiration cycle of a chicken:

Respiration is a continuous cycle where these steps overlap. The second time the chicken inhales, new air is also moving into the posterior air sacs while the previous breath is being pushed from the lungs.

This cycle ensures that virtually all oxygen is extracted from the air chickens breathe.

Chickens also have air sacs and a double respiration cycle. While we inhale and exhale the same air, the air in chickens is passing two breaths. This gives the chickens an efficient respiratory system that can extract much more oxygen from the air. When we exhale, there is residual oxygen in the air we breathe. Chickens can extract almost all of the oxygen.

Chickens, however, have no form of skin breathing or cutaneous respirations. We can breathe through our skin, though it only counts for one or two percent of the air we breathe. While the chicken embryo can breathe through the eggshell, chickens carry out little to no gas exchanges across their feather-packed skin.

However, when it gets hot outside, it's a different story. Chickens are packed with feathers and can't sweat as they have no sweat glands. Chickens can only release heat through the comb, legs, non-feathered body parts, and breathing. They lose heat through the respiratory tract by panting.

As temperature rises, their respiration rate increases, allowing them to cool down via evaporation of their breath. Panting also involves rapid vibration of the upper throat and thin floor of the mouth, also called gular flutter.

When chickens are panting and their respiration rate increases to release heat, they excrete much more carbon dioxide (CO2).

In normal circumstances, too much carbon dioxide is toxic. Breathing helps remove carbon dioxide from the chicken's body. This process avoids respiratory acidosis, a condition that makes the blood acidic and decreases the calcification of the shell.

However, minimal carbon dioxide levels are essential to forming a solid eggshell. The eggshell of a chicken consists almost entirely of calcium carbonate (CaCO3), which is made by combining calcium (Ca) with carbon dioxide (CO2). Laying hens often lay thin-shelled or soft shell eggs when it gets hot outside.

That's why chickens panting to cool down will lay eggs with weaker shells. One way to prevent this is to provide them with extra calcium supplements. An alternative is to give them carbonated drinking water during periods of hot weather. Chickens that drink carbonated water don't show a drop in eggshell quality as their body has enough carbon available to form calcium carbonate for the eggshell.

Diseases of the Chicken Respiratory System

It can be quite challenging to recognize the correct disease. Only a vet can make an accurate diagnosis.

The most common respiratory diseases are:

Diseases can result in multiple inflammations in the respiratory system. Sinusitis is a general term for any infection that causes inflammation of the sinuses, the cavities in the chicken's nostrils. When the air sacs of a chicken become inflamed by bacteria or fungi, it's called airsacculitis.

The chicken's respiratory system has multiple layers of defense to prevent infections and diseases:

We're all familiar with coughing and sneezing, so let's look at the other two ingenious defense mechanisms.

The chicken's airways are self-cleaning, a process which is called mucociliary clearance.

When chickens breathe, they inhale small particles like dust, mold, bacteria, and viruses. The mucus layer in the windpipe and lungs traps most particles preventing them from penetrating the lungs.

Every cell contains about 200 cilia, and they all beat 1000 times a minute. Together they form beating waves that move the mucus half an inch per minute back to the mouth to be swallowed.

The windpipe or trachea of a chicken splits into multiple bronchi that keep getting smaller and smaller. At the end of the bronchi, there are many tiny air sacs in the lungs, called the alveoli. It's in these hollow cup-shaped cavities that oxygen is replaced with carbon dioxide.

Since this involves gas exchanges, the alveoli can not be protected by mucus and cilia but have a separate mechanism. The chicken's immune system produces scavenger cells that hunt down toxic particles, eat them and digest them. These cells are alveolar macrophages, white blood cells that sit on the surface of the alveoli.

The immune system produces extra neutrophils when a chicken gets an infection. Neutrophils are additional white blood cells that help to kill pathogens.

Challenges to the Chicken Respiratory System

A chicken's respiratory system needs to cope with everything a chicken inhales. This poses regular challenges.

Threats to the respiratory system are:

When the immune system is busy fighting dust particles, it can be susceptible to infections with viruses and bacteria.

Gas can be extremely harmful in the chicken coop, as gas particles are much smaller than dust particles. Ammonia fumes are common in hot, moisty weather conditions where ventilation in the coop is insufficient.

Even small increases in ammonia levels cause:

Proper ventilation removes moisture, carbon dioxide, and ammonia via the roof of the chicken coop. The bottom of the coop should be free from draft.

A chicken's respiratory system is an ingenious breathing system that involves many organs. It allows for absorption of oxygen, heat release, vocalization and protects against dust and particles.

Chicken lungs don't expand as they sit between the ribs. The chicken moves its entire rib cage to breathe. The lungs are connected to eight air sacs that lighten the bird and its bones. A chicken must inhale and exhale twice for the air to completely pass through a respiration cycle. This allows the chicken to extract much more oxygen from the air than humans can.

As chickens have no sweat glands, they pant to release heat. Panting can cause excessive release of carbon dioxide, resulting in weak eggshells.

Many respiratory diseases affect chickens with very similar symptoms. On top of that, a chicken's respiratory system has a daily challenge of fighting incoming dust particles, aerosols, molds, and gases.

Luckily, a chicken's respiratory system has many defense systems to prevent diseases. It is self-cleaning, with cilia sweeping away debris in the mucus. The immune system also produces scavenger white blood cells that protect the alveoli.