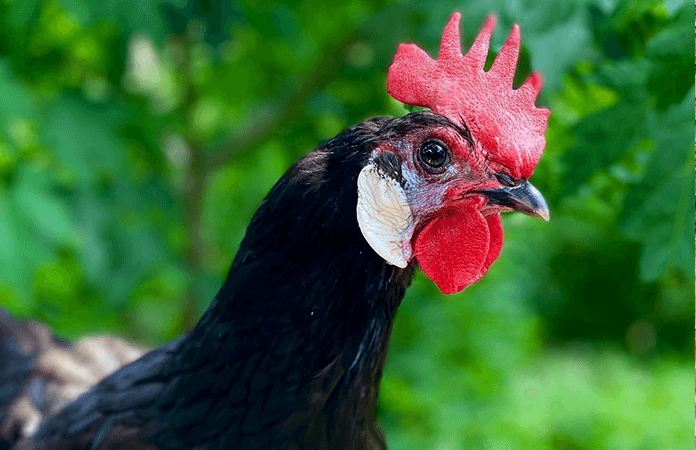 The White-faced Black Spanish chicken, or in short, Spanish, is a large chicken breed that finds its origin in Spain. Their striking appearance is due to their oversized white earlobes and greenish-black plumage, making them look like a Spanish Don.

Let's find out everything there is to know about the White-Faced Black Spanish chicken breed.

Here are some important topics to address:

This ancient heritage breed has an easily recognizable and very distinguished look. Spanish have giant, white, low-hanging earlobes that stand out next to the greenish-black feathering and red wattles and comb. It makes them look like a Spanish Don!

The breed is also called the 'Clown Faced Chicken' because of the face's colors, which resemble a clown's makeup. But there is nothing grotesque about this chicken breed, as it's an ancient breed with a very noble and aristocratic posture and posh look.

Spanish chickens have big white earlobes but bright red wattles and a large red single comb. Like all Mediterranean breeds, this large comb can be prone to frostbite. Their shanks and toes are slate and clean; their skin is white.

Spanish are medium to large-sized birds. Hens can weigh up to 6.5 pounds (3kg), and roosters can weigh more than 8 pounds (3.5kg). There are larger breeds available than the Spanish, and as Spanish are not a dual-purpose breed, they have inferior meat production.

The Spanish is one of the oldest Mediterranean heritage breeds. The Spanish breed is related to the Minorca and Castellana Negra but is much older than these fowl breeds.

They found their origin in Spain but were mainly bred in the UK and the Netherlands in the 18th century. The breed was exported to the US in the late 1800s and early 1900s. The American Poultry Association recognized it in 1874.

After their export to the US, Spanish chickens became very popular and were once one of the best-known poultry breeds. But their popularity came to a downfall by the beginning of the 20th century. Due to breeders paying more attention to accomplishing the bird with the biggest white face, their hardiness declined. The Spanish became a fragile breed with low meat production and needed extra care. Farmers realized that far better options were available for an egg and meat bird, like a White Leghorn.

After its decrease in popularity, the White-Faced Black Spanish chicken was mainly used as an exhibition bird. Nowadays, the breed remains popular in poultry shows around the world. It's a slow-developing breed; therefore, if you want to participate in shows, you must await at least one molt before your bird can enter.

Spanish are decent egg layers that lay up to 180 eggs per year. The eggs are large, around 2.8 oz (80gr), and have a distinguished chalk-white color. They are not a dual-purpose breed, even though they're fairly heavy. Their meat production is poor.

This breed reaches sexual adulthood around the age of 20 weeks and will start laying at the earliest at 20-22 weeks.

One thing to keep in mind is that Spanish chickens are not likely to be broody at all. This is something to remember when wanting to breed with these species, as the hens won't sit on their eggs. You'll need an incubator or another hen to hatch chicks.

Spanish chickens are not cold-hardy, so they'll stop laying during winter or profoundly decrease egg production.

One thing you should know about White-Faced Black Spanish chickens is that they do need more care than 'easier' breeds like Leghorns or Rhode Island Reds. As they are a Mediterranean breed, they don't thrive in colder climates which is something to keep in mind when living up north. Their large comb is prone to frostbite, and they don't stand cold temperatures as they do hot ones.

When living in areas with harsh winters, the White-Faced Black Spanish is not the best breed to keep. There are plenty of hardy breeds that'll do better in extreme weather.

Spanish chickens are not the most friendly or docile birds but are not aggressive to humans or other chicken breeds. They love to roam around in the garden, are excellent free rangers, and need enough space to stretch their legs. The breed can be kept in confinement but won't be as happy and healthy as it would be free ranging.

If you're looking for a pet chicken, the Spanish is not the breed for you. They are not cuddly; they keep to themselves and forage in the backyard, looking for bugs and scratching their feet around.

It's also a vocal breed, and the roosters can be loud. Keep this in mind when living in a suburban neighborhood with many neighbors.

They're not the most friendly or cuddliest birds around, and they do require extra care as they aren't as hardy as other breeds. However, Spanish are good egg layers, so these fantastic chickens can be an excellent addition to your backyard flock with enough space and time to devote.

If you want to learn more about chicken breeds, check out our 'Chicken Breeds Page' to see every specific breed we address. Or go to our listicle breed summary on 'The Classroom', or, if you're unsure where to start, take a look at our 'Chicken Breeds: Ultimate Beginners Guide'.