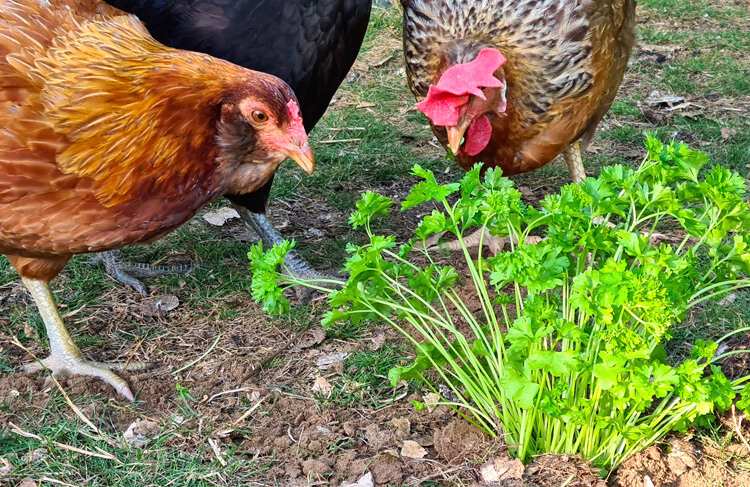 Chickens love parsley. It's a leafy herb, popular in many cuisines. Some people call it a superfood as it comes loaded with nutrients. But is parsley as innocent as it seems? Can it be toxic?

Unfortunately, yes, it can be harmful. Pregnant women are even advised to avoid parsley altogether.

Let's see if feeding your chickens parsley is a good idea.

Chickens can eat the stem and leaves of curly-leaf French or flat-leaf Italian culinary parsley in moderation. It's a healthy food source that provides several vitamins, minerals, and antioxidants. However, parsley also contains some harmful phytochemicals. Chickens can not eat spring parsley, leading to UV sensitivity and beak deformities.

Culinary parsley (Petroselinum Crispum) is a leafy herb typically used in Mediterranean cuisine. The two most consumed types are the French curly leaf and the Italian flat leaf. All culinary varieties are low in calories but packed with loads of micronutrients, flavonoids, vitamins, minerals, and antioxidants.

A single cup of chopped 60g fresh parsley brings the following macro- and micronutrients to the table:

These are high values for the antioxidants vitamin A, and C. 253µg of vitamin A is already 5050 IU, which means a single cup contains 560% of the Reference Daily Intake for laying hens. Antioxidants prevent cell damage. Vitamin A plays a role in the immune system, growth, and egg-laying. Phytonutrients like vitamin C also play a role in the chicken's immune system, metabolism, and production of hormones.

Parsley is especially interesting for its high levels of vitamin K. This vitamin is essential for the bird's bone health and blood clotting. Check our in-depth article on vitamin K for chickens to understand the importance of vitamin K supplementation.

The minerals in parsley help the chicken's body in many biochemical processes. Minerals like iron and calcium are used for bone and egg development and are essential for muscles, the heart, and the brain. They are also vital in the creation of hormones and enzymes.

Dried leaves contain much of the same micronutrients but are lower in essential fatty acids like linoleic acid and myristoyl-coenzyme A. Lack of linoleic acid in young chicks can result in slow growth, fatty livers and make them prone to respiratory infections.

When you have the choice, it's better to feed them fresh parsley to give them the complete set of nutrients.

Although there are many positive nutrients in culinary parsley, there are also some toxic compounds that can not be neglected. There is a reason why pregnant women should not eat parsley. Even in humans, parsley can lead to uterine stimulation and preterm labor.

Parsley contains exceptionally high levels of oxalic acid, 1.7mg/100g. That's even higher than the oxalate concentrations in rhubarb. We went in-depth on oxalates' toxicity in our quest to find out if rhubarb is toxic for chickens.

We'll go in-depth on the toxicity of parsley in a moment. Let's first look at the different types of parsley.

What types of parsley can chickens eat?

Chickens can only eat culinary garden parsley, which means all parsley in the Petroselinum Crispum-family. The most common is leaf parsley, often used as a garnish.

The Hamburg root parsley is less common in the US and UK. It looks like a parsnip but has a different taste. It's in the same family as the other culinary parsley, so chickens can eat the root and the leaves.

Chickens can not eat spring parsley. Although spring parsley belongs to the Apiaceae family, just like garden parsley, it's a different plant that's not safe to eat. Spring parsley contains too many furanocoumarins, chemical compounds toxic to chickens.

Some call parsley a superfood because of all the health benefits.

The antioxidant vitamin C has an important role in the immune system of a chicken. It's used as an antistress agent in poultry and is effective against heat stress. Vitamin C supplementation can support highly productive laying hens, help against parasite infections, and boost the immune system response.

Like other green leafy vegetables and herbs, parsley is a good food source of Vitamin K1 (phylloquinone). Vitamin K1 is vital for blood clotting and bone health. Laying hens need about 2.5-3mg of vitamin K per day per kg body weight. Newly hatched and young chicks need more, about 3-3.5mg.

The vitamin K laying hens get from parsley is passed to their eggs. So if your laying hens are fed on a parsley diet with vitamin K, the eggs you get on your table are also rich in vitamin K.

There are several other health benefits from micronutrients in parsley.

The folate in parsley reduces the risk of heart disease. Beta carotene helps protect the eyes and boosts the chicken's immune system.

Parsley is also known for its antibacterial benefits. It prevents the growth of bacteria like Salmonella and Staphylococcus and supports a healthy microbiome in the chicken's gut.

The big drawback of parsley is that it comes with loads of oxalic acid and contains furanocoumarins. Parsley is a herb that has active bio components. It looks innocent, but it's so powerful that even pregnant women are advised to avoid parsley altogether.

Parsley contains 1.7mg/100g of oxalic acid. That's even more than the average rhubarb leaf, poisonous even for humans. Oxalic acid binds with calcium and iron in the food, which prevents the chicken's body from using this calcium and iron.

Eating too many oxalates can lower the calcium levels in the eggs. However, the eggs should still be in the normal range, and there should not be any impact on the weight, yolk, or egg whites (QURESHI, Azhar, 2011; Zhou et al., 1992; Tamim and Angel, 2003).

Much of the oxalates are excreted via the chicken's droppings. However, continuous feeding of high concentrations is linked to a higher risk for kidney stones and nutrient deficiencies, as the oxalates can form crystals.

All varieties of parsley contain an exceptional amount of furanocoumarins, a toxic chemical compound in the group of psoralens. These toxic chemicals crosslink with DNA in the chicken's cells and cause cell death and inflammation. It leads to phytophotodermatitis, a skin disease that results in high UV sensitivity and severe skin burns.

Fortunately, spring parsley is not culinary, and usually grows in the wild. It's typically seen on the west coast of the US. In one study on the effects of spring parsley, ducks developed beak deformities within eight days after exposure.

Effect of parsley on egg laying

A couple of poultry studies investigated the effect of parsley supplementation on egg-laying performance and quality. Most studies add small, dark parsley seeds to the bird's diet.

One study in 2011 measured the effects of adding dried parsley as a supplement for quails. They did not find any meaningful differences in egg production, quality, or shell thickness. However, they measured a lower feed consumption in the group that had parsley supplementation.

Another study in 2016 on Japanese laying quails could not measure any significant difference in egg weight either. However, they saw an increase in total egg production and size. The concluded parsley might be a performance-enhancing supplement.

Parsley is an emmenagogue, a herb that stimulates blood flow in the uterus. Some women use it to stimulate their menstruation flow. Pregnant women are advised to avoid any parsley. Although it's unknown if the same effect holds for chickens laying eggs, it's known that parsley affects the blood chemicals of Geese.

In chickens, the uterus is the place where the eggshell forms. Since chickens are much smaller, it's probably best not to overfeed them with parsley to bypass any possible uterotonic effects.

Effect of parsley on chicken growth

Some researchers report improved productivity in broiler chickens when adding parsley supplements to their diet.

One study on day-old chicks measured the effects of several herbs like basil and parsley on their growth spurts. They did find a slight increase in body weight after 42 days when chickens got parsley or basil supplements.

The assumption is that this effect is the result of:

Besides the medical effects, parsley is highly nutritional and positively impacts the chick's overall health.

Chickens can eat curly-leaf French or flat-leaf Italian parsley. The herb contains a lot of micronutrients, antioxidants, and minerals that boost a chicken's immune system and overall health.

The birds can eat the stem and leaves of culinary garden parsley, both dried and fresh. Parsley is actively used in poultry when chickens are in stressful situations, especially in cases of heat stress. The vitamins and nutrients provide many health benefits as a supplement in the fight against diseases. The high levels of vitamin K reinforce bone health, which helps mobilize calcium from the medullary bones to lay eggs.

Unfortunately, parsley is a medicinal herb that's also harmful in abundance. Pregnant women are discouraged from eating parsley. Parsley affects the bloodstream to the uterus, the organ where the eggshell forms. Parsley also contains very high levels of oxalic acid, which can lower the calcium levels in the eggs. Chronic exposure to oxalates increases the risk of kidney stones.

Parsley also contains many furanocoumarins, toxic compounds that raise the UV sensitivity of the chicken's skin and result in severe sunburns. Spring parsley is poisonous to chickens as it contains high levels of furanocoumarins.