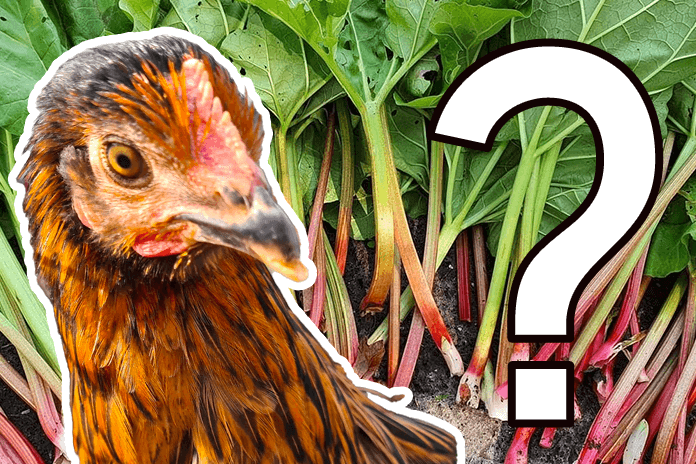 Yes, chickens can eat rhubarb, but only in moderation.

They can eat both the leaves and the stalks. Although rhubarb contains toxins, they most probably won't die from eating some rhubarb once. There are, however, some caveats worth noting. Rhubarb is not a good food source for chickens, and they should especially avoid the leaves.

You might have read that rhubarb leaves contain toxic substances and are poisonous.

Rhubarb (Rheum rhabarbarum) is a popular vegetable with a strong tart taste. It's commonly stewed with added sugar as an ingredient for pies and jam. In the United States, people sometimes call it the Pie Plant.

People did not always eat rhubarb. Before the 20th century, several varieties were solely used in traditional Chinese medicine. It was only after sugar became affordable and widely available that culinary rhubarb came into the picture. Homesteads started to cultivate rhubarb as it's easy to grow the perennial in a sunny, well-drained location.

If we want to know whether chickens can eat rhubarb, we have to look at the entire plant and its individual parts. Rhubarb consists of the popular leafstalks, rhubarb leaves, roots, and flowers.

Rhubarb is 95% water contained in fibers. It is an excellent source of vitamin K (28% per 3.5oz of our Daily Value) and contains some vitamin C. Although it also contains some other healthy micronutrients for chickens, those amounts are insignificant.

To answer whether chickens can eat rhubarb, we must dive into phytochemistry. More specifically, the secondary metabolites of plants. These are organic compounds that are not directly involved in the plant's normal growth, like toxins. Metabolites often serve the role of defense mechanisms that prevent the plant from being eaten by animals.

The most important chemical compounds for chickens are:

The question is whether these compounds are safe or not for our beloved chickens.

We'll start with Oxalic Acid, the compound that is feared the most among chicken keepers.

Oxalic acid is a poisonous substance that is present in many vegetables. During World War I, rhubarb leaves were incorrectly considered a healthy substitute for vegetables in Britain, and people have actually been poisoned after eating Rhubarb leaves.

As bad as that might sound, oxalates actually occur naturally in the human body. Oxalates of rhubarb are in toxicity class 3 for plants:

A chicken that has eaten rhubarb is not immediately going to die. However, category three doesn't make it look like it's completely innocent, either. Let's see what the oxalic acid of rhubarb is doing in the chicken's body.

Oxalic Acid in the Chicken's Body

Oxalic acid is an organic acid that binds with minerals in the body, such as iron and calcium, forming oxalate. The terms oxalic acid and oxalate refer to the same compound. It's called oxalic acid when it's in the chicken's acidic glandular stomach (~pH1.5-3.5) and oxalate in less acidic environments, where it binds, such as the intestines.

These oxalates bind to calcium and iron in the food, which prevents the body from absorbing calcium and iron. High levels of oxalates can even remove iron and calcium from the body. This is especially true in the presence of fibers, and rhubarb is a source of fiber.

However, it does not react with all the other food chickens eat. For example, if you drink a glass of milk, the oxalates in spinach will not prevent the absorption of the calcium in the milk.

Oxalates are generally excreted via the chickens' droppings. However, high levels of oxalates are linked to a higher risk for kidney stones. Especially in cases of dehydration, oxalates can form crystals. In humans, most of the oxalate in urine is a by-product of their own digestion rather than food.

Toxicity of Oxalic Acid in Chickens

To find out if chickens can eat rhubarb, we will look at the amount of oxalate in rhubarb and the point where consumption becomes lethal.

How much Oxalic Acid is in Rhubarb?

The oxalate concentration depends on the variety of rhubarb, the application of fertilizers, the soil, and the plant's maturity. So there is a range, but it doesn't vary very much.

Remark that the oxalate levels in rhubarb leaves don't differ much from other vegetables. They are also still much lower than the concentration in spinach.

But we've found studies on species of culinary rhubarbs that report higher concentrations of water-soluble oxalates up to 3.13% (1.56-6.03%).

How much rhubarb can chickens eat?

The most pessimistic LD50 (median lethal dose) for oxalates is 375mg/kg body weight. Other sources report an LD0 (minimum quantity to be fatal) of 600mg/kg. These values express the risk of dying from kidney stone disease (nephrolithiasis).

A human of 65kg needs to eat 4 to 8kg of leaves to obtain such a lethal dose, which is an enormous amount.

What about chickens? Let's calculate:

These values are about twice the amount of food the chickens usually eat: about 3.5 ounces (~100g) per day.

That's a lot of rhubarb, but it's not an insane amount, either.

Why you shouldn't worry too much about these numbers

These numbers apply when the oxalate is injected immediately into the bloodline. In reality, the chickens will play with their food and mix it with other food. They won't eat everything in just one single bite. Furthermore, it's their instinct to stay away from food that makes them feel sick, and they don't usually overeat. Overeating will give them abdominal pain from the anthraquinones.

We used the pessimistic lethal doses for humans and rats. The digestive system of chickens is much more efficient in breaking down vegetables and greens. They excrete vast amounts of oxalate via their urine before it can bind. Spinach contains more oxalates and is often recommended as a food source.

Scientific studies have reported that they found no poisoning symptoms after hens ate fresh rhubarb leaves. When you search online, you will find plenty of stories of chickens that ate rhubarb leaves and did not show any signs of illness at all. Acute fatal poisonings in chickens due to eating rhubarb are very rare.

Should you ever worry about oxalate intoxication?

As we've seen, oxalic acid is poisonous, so use common sense to assess the situation. If you have small pullets, grown-up chicks, or your chickens have known kidney issues, be careful and keep an eye on them. Also, if you've been feeding your chickens rhubarb leaves regularly, there might be an elevated risk for kidney stones.

Oxalate poisoning occurs more frequently with smaller birds like cockatiels eating common houseplants. Plants like the Umbrella Plant, Peace Lilly, Dumb Cane, Photos, and Philodendron contain large amounts of oxalates. So if you are keeping Silkies in-house, rhubarb might not be the worst enemy.

If you notice any symptoms, contact your veterinarian or poison control center.

So your chickens won't immediately fall dead after eating some rhubarb. But what about the calcium levels and egg formation?

Oxalic acid in rhubarb binds to calcium, so the chicken's body can't absorb the calcium anymore.

Calcium is a crucial ingredient for hens to produce quality eggs. Calcium carbonate is the primary building block of a chicken's eggshell.

However, the oxalic acid of rhubarb will primarily bind with the calcium present in the rhubarb itself. When your hens start eating from another calcium source, the intestines will absorb that calcium.

So don't start eliminating all sorts of food from your hen's diet because they contain oxalic acid. Oxalates are very common in leafy greens. If rhubarb and spinach are the only things your hens would eat, it would be a problem because they would ultimately be deprived of all their calcium sources.

What does science say?

The resulting eggs are still in the normal range but contain less calcium than the hens' eggs before adding oxalates to their feed. Oxalates didn't impact the weight of the eggs, the egg yolk, or the egg whites. In the end, shell thickness varies more with age and seasonal effects. (QURESHI, Azhar, 2011; Zhou et al., 1992; Tamim and Angel, 2003)

What if your chickens have eaten a vast amount of rhubarb leaves?

If your chickens eat large amounts of rhubarb leaves, make sure they have calcium sources available, like crushed oyster shells.

We've covered much about oxalates, but what about the other metabolites?

The roots and stems of rhubarb contain brown-red chemical compounds called anthraquinones, such as emodin and rhein. These are active ingredients used in traditional Chinese medicine. They have laxative, antibacterial and anti-inflammatory effects. However, long-term consumption is now linked to kidney failure.

So far, so good. Are there any adverse side effects of anthraquinones in chickens?

Anthraquinones and their glycosides are secondary metabolites known for their laxative effect. Chinese rhubarb (rheum palmatum) is used in traditional Chinese medicine as a laxative. Anthraquinones prevent water absorption in the chicken's intestines and, at the same time, stimulate the peristalsis (contraction). These contractions can be excruciating for the hens.

Let's summarize some of the health effects we've discussed to see if our beloved chickens can eat rhubarb.

There are very few positive health effects. Apart from Vitamine K and C, there are no interesting amounts of micronutrients for chickens in rhubarb.

The only positive application of rhubarb would be the medicinal application of anthraquinones as a laxative. It can combat roundworms and tapeworms as a natural product, combined with ground pumpkin or courgette seeds. However, no plants or herbs can completely remove worms in chickens.

Rhubarb is just not a recommended food source for chickens. It's the other way around: chicken manure is an excellent fertilizer for rhubarb to grow and produces slightly more prominent and stronger roots!

Should you worry when your chickens eat rhubarb?

If your chickens ate some rhubarb, don't panic. The rhubarb leaves have higher levels of oxalic acid, but so does spinach.

Ensure they have access to regular food and water, and they will usually be fine. We won't recommend rhubarb as food. It's just a terrible food source as it contains very few micronutrients, and long-term use can damage the chicken's kidneys.

If the hens show signs of gastrointestinal issues such as diarrhea, it's probably due to the anthraquinones in the rhubarb. Offer them some calcium-rich food such as oyster shells, as the oxalates will render some of the calcium in the food unusable by the body.

That said, evaluate your specific situation. If you have small-sized chickens, a sick Polish chicken, or little chicks, keep an eye on them.

Last but not least, don't hesitate to contact your veterinarian or poison control center when you notice some irregularities.