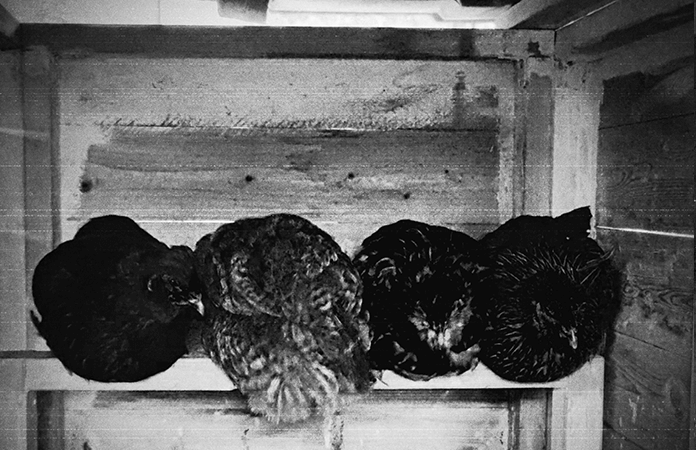 No, chickens can not see very well in the dark. They are not nocturnal animals like cats that sleep most of the day and are awake at night, so their sight isn't adjusted to dark surroundings. As chickens roost at night and have bad night vision, they are vulnerable to predators when darkness falls. There are several things you can do to keep them safe at night!

Can Chickens See at night?

No. Chickens have lousy night vision. They aren't nocturnal animals, so their vision isn't adjusted to seeing well at night. Compared to humans, chickens see less detail in a dark environment than us; however, they see better in a lit environment and have better color vision.

Why can't chickens see in the dark?

Chickens have almost no rods in their eyes, which are responsible for the formation of images in low-light circumstances. The more rods you have, the better you see in the dark. Chickens lack those rods, so they can not see well in the dark. They even have worse night vision than humans.

As chickens are birds, they must rely on their vision to assess their surroundings. They depend on their sense of sight to recognize other chickens and their behavior, identify humans, look out for predators, and localize food and water. Although chickens don't need to use their vision to navigate like migratory birds, they depend on their eyes to guide them throughout their environment.

All eyes, even human eyes, have cones and rods, where rods are responsible for vision at low light levels and do not mediate color vision, and cones are capable of color vision. Humans have three types of cones; chickens have four cone types. This means chickens have better color vision than humans and can see blue, red, green, and ultraviolet light, whereas humans can not see ultraviolet.

The rods are responsible for the formation of images in low-light circumstances, and that's what a chicken lacks. They have worse night vision than humans because chickens have almost no rods.

The eyes of a chicken are located on the sides of its head, meaning they can see 300 degrees around. Chickens have both monocular and binocular vision, but only binocular vision is responsible for depth development in sight. From the 300 degrees chickens can see around them, only 30 degrees is binocular. It's believed that those 30 degrees are not enough to provide chickens with depth perception.

Prey animals, like chickens, mostly don't develop the best depth vision, whereas predators do. In predators, like humans, the eyes are located on the front of the head, giving them good depth perception.

Because of their lack of depth vision and inability to see well in the dark, chickens are vulnerable to predators at all times of the day, but especially at night. Keeping them protected and safe is vital.

How to protect chickens from predators at night?

Due to their poor night vision, chickens are very vulnerable to predators at night. They're almost blind, so they can't see if someone or something is approaching the coop. It's essential to secure the run and coop as much as possible so they'll have a safe night's sleep.

Things to do to keep your chickens safe:

Nighttime predators such as coyotes, foxes, and raccoons are masters in breaking and entering a chicken coop. And once they've discovered your flock, chances are, they'll keep coming back. When living in an environment with many predators, installing proper fencing and repellant systems is a minimum requirement to keep your chickens safe.

Installing an automatic chicken coop door is a great way to secure your chickens without getting up every morning to open the coop. The door closes automatically when night falls and opens in the morning.

Read our review on the 'Chickenguard Automatic Coop Door', and decide for yourself whether it's the right solution for you.

Do chickens need artificial light in the coop?

No. Chickens do not need artificial light in the coop, even in winter. Ideally, chickens need at least six, preferably eight hours of complete darkness daily. This way, your birds develop natural hormonal fluctuations, positively affecting their overall welfare.

So even if they're most vulnerable at night and can't see in the dark, providing artificial light in the coop is unnecessary. It can be beneficiary, however, when living in an area with less than 6 hours of daylight in winter. When artificial lightening the coop, remember that although chickens see better in brightly lit areas, very luminous lamps encourage behavior like feather pecking and aggression. You better use dimmed lights or a red light inside the coop, so they can still see without the environment being too bright. Red lights are commonly used in brooders' heat lamps, as traditional white lamps keep chicks restless, resulting in stress and undesirable behavior.

During winter, there aren't too many hours of sunlight to enjoy. You'll notice your chickens laying fewer eggs and going to roost in the late afternoon. Some chicken keepers provide artificial light in the coop to increase egg production, but this is not for the benefit of the chicken, only to produce more eggs. It's in their nature to take a break from laying eggs in winter, so encouraging this much-needed break will put less pressure on your hens. Chickens also need between six and eight hours of complete darkness to stay happy and healthy.

Chickens aren't nocturnal animals and can not see well in the dark. They're most vulnerable when darkness falls and should be safe inside the coop at night. Chickens can see more colors than humans, but their night vision is worse than ours.

Because they can't see well at night, they're vulnerable to predators. Ensure you protect your flock, especially when living in an area with many predators. Don't use artificial light in the coop; it's unnecessary when you have 6 hours or more of nighttime. Birds need between six to eight hours of complete darkness daily to keep them healthy.