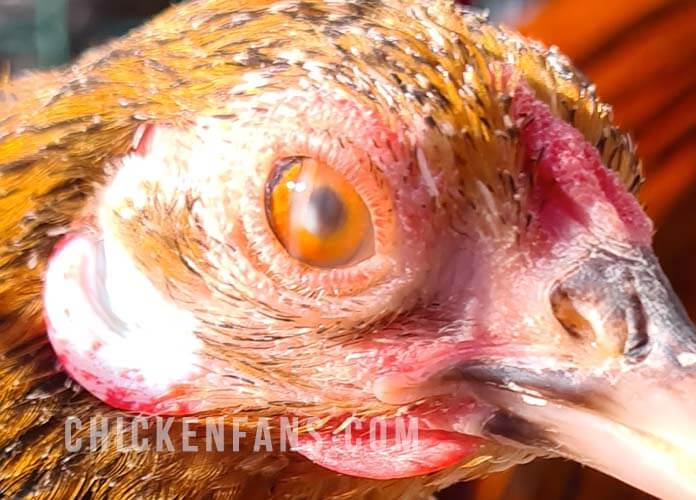 Cloudy eyes can look terrifying in chickens. And with reason. A cloudy eye is a clinical sign of many terrible eye conditions. Should you be worried?

Ammonia blindness is the result of eye infections due to ammonia fumes. These fumes have a pungent odor and irritate the eyes and lungs. It's used in household cleaning products as a degreaser, especially window-cleaning products.

Bacteria break down nitrogen in the chicken's droppings and produce ammonia fumes. Ammonia fumes can't escape the chicken coop without proper ventilation, with the risk of ammonia concentrations exceeding toxic levels. Chickens that live in confined spaces are highly vulnerable.

The ammonia concentration depends on:

Long ammonia exposure results in inflammation of the eye and cloudy eyes. Young chicks are especially susceptible. Usually, both eyes are cloudy, since the fumes are everywhere.

Especially in the wintertime, proper ventilation is essential. Birds are spending more time inside the coop, which means more droppings and ammonia exposure.

Proper ventilation should always be on top of the chicken coop to prevent the chickens from sitting in draft. An adequate airflow refreshes the air inside the coop, removes evaporated ammonia fumes, and prevents pink and cloudy eyes.

Infectious coryza is a worldwide bacterial respiratory disease in chickens. It's very common since few birds are usually vaccinated for the disease. Most poultry keepers face the disease once in their flock.

Coryza is a contagious disease that will show signs one to three days after infection. It's spread via contact, contaminated food, or water but can also be transmitted via aerosols in the air. It will roughly last a week with proper treatment.

The cloudy eyes can be the first stage, as sometimes the eyes will close completely. Blinded chickens may find it challenging to find their food and waterers.

New England Disease, also called epidemic tremor or encephalomyelitis, is a worldwide contagious viral disease that targets the nerves of young chicks. It can infect adult chickens too, but they won't get sick.

It's most common in unvaccinated backyard chicks.

In severe cases, you need to feed and hydrate the chick, as they cannot eat and drink.

Even when the chicks recover:

Cataracts also result in cloudy eyes with a blue shine, making it difficult for the chickens to see well.

Just as humans can be born blind, chicks can hatch blind too. Or they can become blind due to an injury or disease.

It's usually quite obvious when the chicks are blind. They will:

Blind chicks can still survive. They just have this extra challenge on them.

Gene therapy exists to restore sight in chickens that would normally be born blind. However, it can't restore eyesight in chicks as it needs to be injected into the eggs before hatching. The cure is not meant for chickens either, as it's part of research for genetic diseases in human blindness.

We might be stating the obvious here, but cloudy eyes can result from an eye injury or a secondary infection.

There are multiple possible culprits for eye damage:

Eye injuries are always very tricky and not easy to assess with the naked eye, so it's best to contact a skilled veterinarian immediately.

Avian chlamydiosis is a bacterial disease caused by the same bacterium as human chlamydia. It's widespread in backyard chickens. In severe cases, the disease can be fatal. Chlamydiosis can be treated with antibiotics.

There are many symptoms, and it's difficult to pinpoint the disease as there are so many strains. The most common symptoms are:

In case of an eye infection, the chicken can have cloudy eyes due to the inflammation.

Marek's disease is a common, widespread viral disease that can kill many birds in a flock. It attacks the nerves and paralyzes the legs, neck, and wings of a chicken. The disease has grown worse over the years and can also develop cancerous tumors.

Marek's Disease comes in two forms, and it's the nervous form that causes paralysis. Infection usually starts at the sciatic nerve, rendering the legs and wings unusable, but the infection can progress towards the neck and brain. Ultimately the eye nerves can become infected, growing cataracts that look like cloudy eyes and can turn the chicken blind.

If your chicken has cloudy eyes but none of the other symptoms, chances are slim to none that it's Marek's disease.

A cataract is a cloudy spot in the lens of the chicken's eye. It can slowly grow until the chicken becomes blind. In a normal eye, the lens is crystal clear. With cataracts, the incoming light is scattered, and vision becomes blurred.

Cataracts can occur in one eye or affect both eyes of a chicken. When both eyes are affected, the chicken is severely visually impaired until she gets completely blind.

Cataracts can be the result of:

Cloudy eyes on a chicken look scary and should be considered a critical sign of illness.

In general, cloudy eyes can result from:

It's very difficult to make a diagnosis on your own for eye disorders, so we recommend immediately contacting a veterinarian.