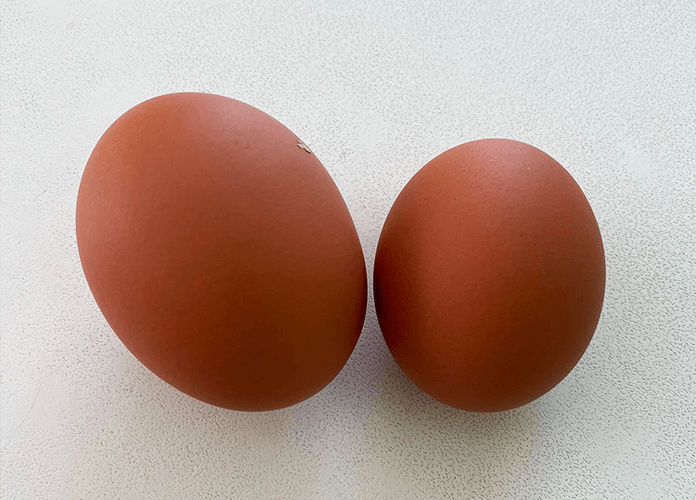 How do double yolk eggs happen?

A double yolk occurs when the hen releases two egg yolks during her daily ovulation. These yolks are enclosed in the same eggshell. They mainly happen in young hens whose reproductive system hasn't matured yet. Shortly after egg production starts, their body will modify so only one yolk egg is layed. However, some chickens inherit the characteristic of laying double-yolk eggs and continue to do so in adult life.

Double yolks inside an egg are nothing alarming, so there's no need to be worried when it occasionally happens. Back in the old days, double yolked eggs were even a sign of fortune and good luck!

Abnormal eggs aren't that uncommon. Once your hens are old enough to start laying, chances are, during their lifetime, they’ll lay some abnormal-looking eggs. They can lay weirdly shaped eggs, soft-shelled eggs, eggs with a strange texture, fairy eggs, or double yolk eggs. Further research must be done only when your hen frequently lays weird-looking eggs.

The short and easy answer is no. Double yolks in eggs happen accidentally and have nothing to do with the genetic modification of your breed of chickens. However, the poultry industry has genetically altered the reproductive system of some breeds of laying hens to increase their egg production. Some producers even have selectively bred for double yolk egg layers. But it is just a coincidence when it occasionally happens to your hen.

Can an egg contain more than two yolks?

Yes. There have been reports about three or even four yolks inside the same egg. However, we could not find any information on whether these kinds of eggs were ever fertilized or not. According to Guinness World Records, the world record for the highest number of yolks found in an egg is nine (9!).

Can you hatch double yolked eggs?

Yes, it is possible to hatch two chicks from the same egg if it contains two yolks. If this succeeds, the chicks are fraternal twins.

However, the chances of success are slim because only one embryo will fully develop in most cases. Two embryos inside the same egg can start growing, but space and nutrition are limited, so nutrients will mainly go to 'the stronger' chick. This causes the second chick to die inside the egg or be much weaker or not viable than the other chick. Several things can go wrong when trying to hatch a double yolked egg:

So it's better to be prepared for things not to go very smoothly when you have double yolked eggs inside the incubator. And always be aware of the risks before trying to hatch twin chicks.

On the bright side: it's NOT impossible. So if you're ready to give it a go, please try.

Can chickens have identical twins?

A fertilized double yolked egg brings fraternal twins. But what about two chicks coming out of a single yolk? Theoretically, a single yolk egg can develop two identical twin chicks, but it's an infrequent occurrence, and chicks usually die relatively soon after hatching. Research has documented whether it is possible to double fertilize a single yolk egg and successfully hatch two healthy chicks from the same egg. In most cases, the rare occurrence of double fertilization seems possible. But the chances are high that one of two chicks, or both, won't live very long after hatching.

Double yolk eggs are relatively uncommon, but they can happen occasionally. Especially young hens, whose reproductive system has not matured yet, are more likely to lay weirdly-looking eggs. It is possible that double yolk eggs are fertilized and contain two twin chicks. However, chances of success are low, and there are many potential problems to remember when hatching a double yolk egg.