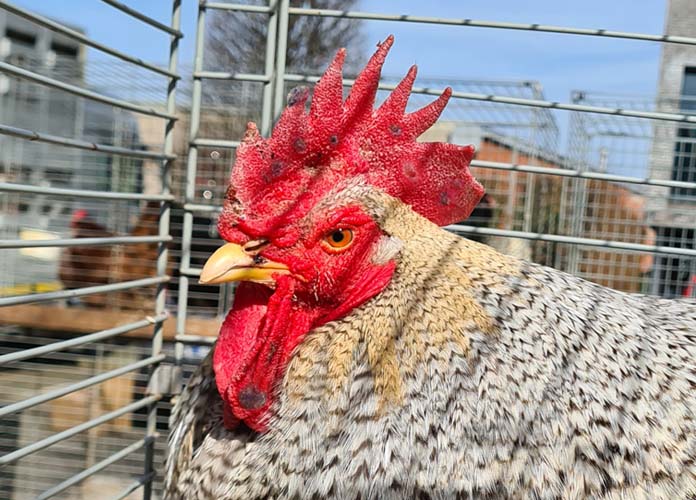 Fowlpox is a severe infection that can torment a backyard chicken flock for many months. Although not contagious for humans, it can be fatal for chickens. Since there is no cure yet, chicken owners should inform themselves.

We'll take you through everything to know about fowlpox in chickens.

Fowlpox is a severe skin infection in poultry caused by the avian pox virus. Luckily, this virus is not the same as human chickenpox and can't infect people.

The most common one is dry pox, caused by mosquito bites or skin contact. It creates painful blisters and warts on the chicken's open skin, like the comb, eyes, and legs.

Wet pox, on the other hand, is caused by inhalation of the virus. It infects the throat and respiratory system of the chicken. The wet pox form is the more deadly, as yellow plaque in the throat can grow so immense that the chicken can't eat or drink anymore.

Infected hens will suffer from both forms and will slow down on egg-laying.

The dry, cutaneous form of fowlpox is known for the black pimples and scabs growing on the chicken's skin. These nodules are mainly visible on the unfeathered parts of the chicken, such as the comb, eyes, wattles, and legs. They start as pimples, turn yellow, and evolve into thick dark scabs.

When the virus manifests near the eye, the eyelid can grow completely closed. The scabs are painful and cause a fair amount of discomfort for the chicken. While they are hopping around with the pox scabs, their skin is prone to secondary infections. Keeping them clean is crucial to prevent further damage.

The scabs last for two to four weeks. Then they come off and fall on the ground leaving a scar on the chicken's skin. The fluttering pox scabs are highly infectious to the other chickens.

The wet, diphtheritic form of fowlpox does not manifest itself on the outer skin but in the respiratory tract. It causes a yellowish plaque in the mouth and throat of the chicken.

The plaque starts with small white spots turning yellow and growing into large patches. They can grow so large that the chicken can't swallow anymore. Chickens can have difficulty breathing and yawn with an open beak.

Usually, a chicken catches either the dry or the wet variant, but they can occur together. If there is a pox infection in the flock, both forms can occur simultaneously.

How to Treat Fowlpox

There is no specific cure available for chickens infected with fowlpox. Isolate the birds and provide supportive care while you let the virus run its course. Clean and disinfect the scabs as much as possible to prevent secondary infections.

Several over-the-counter products are available to treat the black spots on the combs and wattles of dry fowlpox.

Vitamin A is given as an adjunctive treatment for an avian pox to boost the immune system. Vitamin A for pox infections is most effective in case of deficiencies or when chickens suffer from (heat) stress.

Keep the environment as clean as possible to prevent the further spreading of the virus:

Some vets will prescribe antibiotics to prevent secondary infections, but antibiotics will not help against the pox virus itself.

Fowlpox can infect the birds of a flock at any age. It's in no way comparable with chickenpox infections that usually occur in young children.

Most flock infections start with mosquito bites. When a mosquito feeds on the blood of an infected bird, it can carry the virus around for about two months. If the mosquito bites any of your chickens during that time, it can infect the bird with the pox virus. A single mosquito can infect multiple chickens and multiple flocks.

The incubation period of the virus is four to ten days and nodules start to show up about five to eight days after the infection.

Spread inside the flock

Once the virus has entered the flock, it can spread through the flock in different ways.

Oftentimes the virus is transmitted by skin contact or chickens pecking each other. The scabs look like tiny insects and can attract the attention of other chickens.

Dried scabs and broken skin that fell off an infected chicken contain the pox virus and are highly infectious. Another bird can pick up the virus by scratching and pecking in the dirt. The virus is highly resistant and can survive up to a year in a dried scab flying around in the soil.

Dried skin sheds and scabs crumble over time, and small virus particles can be carried around in aerosols floating through the air. The pox virus is airborne and can infect chickens, inhaling the virus particles. Virus particles attaching to the throat usually result in infection with wet pox.

On the positive side, chickens recovered from fowl pox are not contagious anymore. They can't infect other chickens.

Fowlpox is a slow-spreading infection. When the virus enters your premises, it may take several months to get rid of it.

Can Humans get Fowlpox?

No, fowlpox is not contagious to humans. Fowlpox is an avian pox virus that is very host-specific and can only replicate in avian cells. There is currently no scientific evidence that it can infect humans. Since they are so safe, they are used in vaccine development for human diseases.

This is rather remarkable since avian pox is in the same virus family as smallpox. The smallpox virus killed up to 300 million people in the 20th century. It has only been eradicated in 1980 after a worldwide vaccination campaign.

This raises some questions. Since avian pox is so contagious for chickens, why can't a mutation jump on a human if it's in the same family as smallpox?

Although being investigated by scientists for vaccine development, the replication mechanisms of the avian pox virus are poorly understood compared to other poxviruses. The infection of a cell is a complex process. The virus first needs to overcome multiple defense mechanisms of the body and the immune system. After intrusion, the fowlpox virus must figure out a way to build proteins based on its viral DNA.

Fowlpox viruses cannot do that in human cells or other mammals, but they certainly can in chickens and turkeys.

How to Prevent Fowlpox

The best way to prevent infection and spread is to vaccinate your chickens. There are several effective vaccines on the market. Most of the available vaccines are attenuated live vaccines. They contain the real germ but in a weakened form.

Chicks can be vaccinated after hatching and re-vaccinated when they are 12-16 weeks old. Vaccinated chicks should have permanent immunity. In high-risk areas, vaccination of adult birds can be repeated yearly before the mosquitos show up in summer. If there is less than 20% of the flock infected, you can vaccinate the other birds of the flock as a preventative measure.

It's impossible to prevent fowlpox just by regular maintenance and proper hygiene. But in case of an infection, you should isolate the infected chickens and prevent further spreading by applying proper bio-security.

The only thing you can do is to try to keep the mosquitos out:

But as we all know, mosquitoes are very persistent and difficult to keep out.

Never install mosquito repellents based on diffusers in the chicken coop. Most of them evaporate toxic pesticides that can harm your chickens when they inhale the fumes.

Reading articles about the fowlpox virus can be very confusing, as there are so many names and strains.

Let's shed some light and see how they all relate together.

Difference between Fowlpox, Canarypox, and Pigeonpox

Fowlpox is a specific variety of the avian pox virus to which only poultry is susceptible. Fowlpox will only manifest in chickens and turkeys.

There are other types of the avian pox virus that target different birds. Pigeonpox will only affect pigeons, and canarypox will only affect canaries. Apart from these three, there exist several other variations, like quailpox. All these avian poxviruses are different, and each virus can only grow and replicate on a particular host.

Difference between Fowlpox, Chickenpox, and Smallpox

Fowlpox is an avian pox that targets chickens. And avian pox is part of an even larger family of poxviruses that also includes smallpox. Smallpox has killed up to 300 million people in the 20th century. After a worldwide vaccination initiative of the WHO, it became the first infectious disease that has completely been eradicated from our planet in 1980. The second one was rinderpest in 2011.

Smallpox was a terrible disease, and the malignant version was almost always fatal. It could kill a human in 8 days. The symptoms are the same as with all poxviruses. People develop painful skin rashes all over their bodies that turn into fluid-filled blisters.

Chickenpox is something completely different.

Chickenpox is a disease caused by the varicella-zoster virus, a common herpes virus. It's also highly contagious, but it has nothing to do with poxviruses.

When smallpox was still around, there was a lot of confusion when people got infected, as chickenpox also causes small itchy blisters all over the body.

Chickenpox has nothing to do with chickens, and your chickens can't get infected.

There are a lot of theories on how chickenpox got its name. One theory is that the blisters of chickenpox look like peck marks caused by chickens. Another theory is that it refers to the mildness of the disease compared to smallpox.

While varicella-zoster is a herpes virus targeting humans with chicken pox, there is an equivalent herpes virus that actually targets chickens. It causes Marek's disease and shares many biochemical characteristics with chickenpox.

Marek's disease is a widespread, horrible, cancerous disease that paralyzes chickens. Most chickens are vaccinated against Marek's, but in 2020, some virulent strains could break through the vaccines. Read our full in-depth explanation of Marek's disease to learn more about this horrible disease and its risks.

Fowlpox is a highly contagious virus that infects chickens. It is usually brought to the flock by mosquitoes, and there is no cure yet. The best way to prevent an outbreak is to vaccinate your chickens. The fowlpox virus can not infect humans, and it has nothing to do with chickenpox. Although fowlpox has similarities with other avian poxviruses, it will only affect chickens and turkeys.