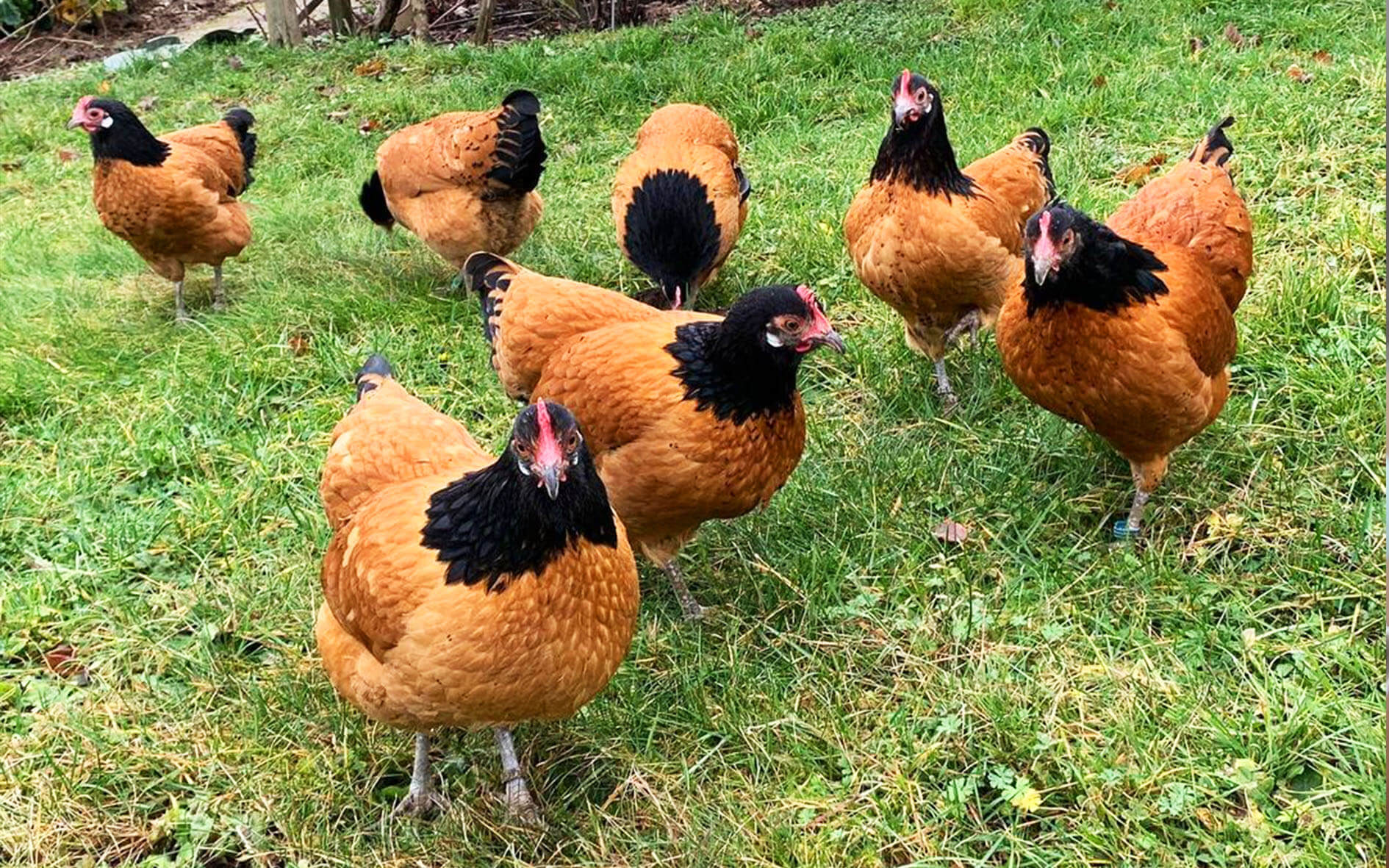 Vorwerk chickens are a German breed with a beautiful black-on-gold pattern. Next to the large fowl, there is also a Bantam version with a European strain and a separate US variety.

Let's have a closer look.

A Vorwerk chicken looks like a Lakenvelder, but the ground color of the bird is brown instead of white. The characteristic look is often confused with a Golden Lakenvelder, which is a different breed.

The roosters weigh 6 to 7 pounds (~3kg), while the hens tip the scale at roughly 5 pounds (2-2,5kg). There is also a smaller Bantam version. Essentially, two main Bantam Vorwerk strains, the American and the European, were developed independently.

Vorwerk chickens are fast-growing, strong, medium-sized birds. They have a single bright red comb firmly straight and upright, evenly serrated with five distinct points. The earlobes are medium-sized, almond-shaped, flat, and smooth. The hackles are abundant, with the feathers falling gracefully over the shoulders and back. The tail is carried well back and spread at a 350-degree angle above the horizontal. The tail feather sickles and wing coverts are abundant and broad.

Their legs are slate, have a blueish tint, and are free from feathers. The birds have black necks, heads, and tails, while their body is brown/gold and buff-colored. The ideal Vorwerk chicken would have no signs of black pigment in its golden areas.

The black and red pigments in the plumage are the same for roosters and hens, so they look similar. It's not an autosexing breed, either.

The standard Vorwerk fowl are pretty good layers and produce around 170 eggs yearly. The eggs are off-white or cream-colored.

Inheriting from the Orpingtons, they lay eggs through the winter. As such, they are an ideal addition to a regular flock to get a steady stream of eggs throughout the year.

The German birds rarely get broody, but it can happen every once in a while. You most probably will need an incubator to hatch the eggs.

Vorwerk chickens are generally gentle chickens. They are active and alert like Mediterranean breeds, which doesn't make them lap chickens.

They are fine to keep in a chicken run, and although they are proficient flyers, that doesn't necessarily mean they will try to fly over the fence. However, they are also happy to free range.

The German birds are used to bad weather and are cold-hardy. However, if you live in a very cold climate, their single comb can be prone to frostbite.

The roosters are easily tamed, pretty tolerant towards each other, and, although active, generally not aggressive.

Oskar Vorwerk originally created the Vorwerk chickens in 1900. He wanted to create a variety of the Lakenvelder with a couple of changes:

After completing his mission, the new strain got his name and was first presented in poultry shows in 1912.

Due to the prominent role of Germany in World War II, the Vorwerk breed was almost completely wiped out of existence.

Origins of the Vorwerk Bantam

In Europe, independent breeders started to create their own Bantam versions of the Vorwerk. As such, there are probably multiple lines in existence at this moment.

In 1966, Wilmar Vorwerk, a chicken breeder from New Ulm in Minnesota, became interested in the European Vorwerk Bantams, as the breed was carrying his name. He was unable to get any eggs, so he decided to create his own bantam version from scratch. We'll discuss his selective breeding method in depth later in the article.

There is also a Vorwerk Bantam variety. The Vorwerk Bantam is listed as a single variation in the recognized breeds of the American Bantam Association.

The Vorwerk Bantam is the miniature version of the large fowl. There are European strains of the Vorwerk Bantam, and Wilmar Vorwerk created an American variant. As always with Bantams, they produce smaller and fewer eggs than large fowl.

The Vorwerk Bantams are enthusiastic, active, and alert chickens. The chicks are quick to find their water and feed. When old enough to go outside, they scratch the soil all day long. They will find every little spot in the run and are the last to get back in the coop at night. They are very docile but proficient flyers and can strike the air like pheasants. However, that doesn't necessarily mean they will fly over the fence.

The US Vorwerk Bantam By Wilmar Vorwerk

In 1966, Wilmar Vorwerk saw a picture of the Vorwerk Bantam in the German poultry paper Geflügel Börse. He was impressed by the rare color patterns and thrilled to find a breed of chicken that carried his family name. Vorwerk himself was of German descent. His father was born in the German part of West Prussia.

After a quest of multiple years to find Vorwerk eggs in the US, he decided to create his own Vorwerk Bantam variety. He started entirely from scratch and used selective breeding and genetics to carefully create the Vorwerk clones. It took him many years to do the breeding, but he eventually succeeded in his mission. His Vorwerk Bantam was admitted to the American Bantam Association standards in 1985.

For the selective breeding, he started with the following Bantams:

To kickstart his project, he set up two pens:

The following season, inbreeding brothers and sisters produced a new set of varieties:

With the resulting birds, he created two pens again in the next spring:

He then selected one of the cockerels in both pens to mate with the best and smallest pullets. That strategy didn't work out as well. He had some lovely cockerels, but the hens lacked coloring, and there were a lot of rose combs.

To counter that, he got his hands on a pure Buff Columbian Rosecomb bantam cockerel with deep blacks in the hackles and tail. The following year, he mated this cockerel with his best pullets. The mating produced beautiful cockerels again, but the pullets were not yet the deep color he was hoping for. Some birds were entirely black, and about one-third carried rose combs.

From that point on, he bred his best colored single-combed birds each season to get to his end result several years later.

Vorwerk chickens are a German breed that resembles the Lakenvelder but comes with a black and gold pattern. They are decent egg layers that lay through the winter. These German birds are docile, sprightly, and excellent flyers.

There are European and US Bantam versions that were developed independently. The European Vorwerk large fowl is less common in the US and is not listed in the Standard of Perfection of the American Poultry Association.