Home > Breeds > Australorp Chicken: All About This Egg Machine
Breeds

Australorp Chicken: All About This Egg Machine 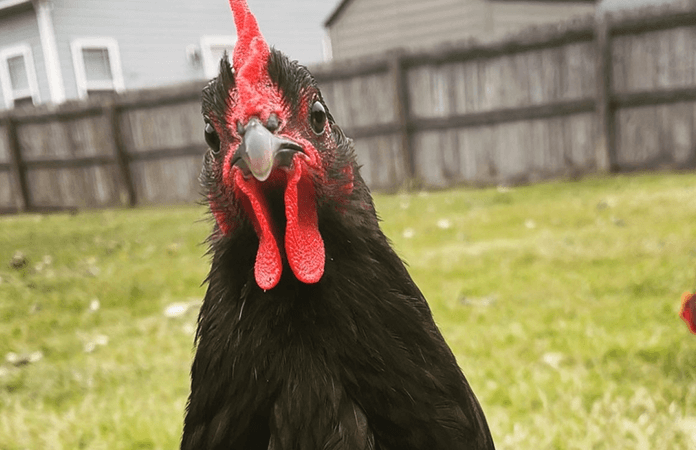 The Australorp is a large Australian chicken breed with excellent egg-laying skills. They're docile and friendly, which makes them great pet chickens! Let's find out everything there is to know about this gigantic breed.

We'll start with some key characteristics:

Australorp chickens are very popular with chicken keepers due to their stunning look, large body, and great egg-laying skills. Their ancestors were Black Orpingtons, which explains the hugeness of these birds. Both Australorps as Orpingtons are known to be giant chickens, with a very docile and friendly nature.

Some Australorps are even bigger than 6.5 to 9 pounds, but it's best not to let them go overweight. If you keep Australorps chickens only in confinement, chances are they'll be overweight, which can decrease egg production.

Australorps are usually black, and this is the only plumage color officially recognized in the US, but Australia also recognizes blue and white as colors. The breed has a long, broad back and an upright stance. Their eyes are dark brown, their beak is black, and they have red earlobes and a large red single comb. Their legs are dark and unfeathered.

The story of the Australorp begins in the last decade of the 19th century when Black Orpingtons were imported to Australia from the UK. Around that time, Orpingtons were very popular in England due to their excellent meat, but the Australians immediately spotted the egg-laying capabilities of this large chicken.

By cross-breeding the Black Orpington with multiple other breeds, such as Minorca, white Leghorn, and Langshan, the Australorp was created. The breed immediately gained fame when a few laying Australorp hens set some records. At a Grafton Contest in 1923-1924, one Australorp hen laid 347 eggs in 365 days; that was an absolute world record! But some time later, the record got smashed by another Australorp hen, laying an astonishing 364 eggs in 365 days.

Soon after that, the breed was popular because of its meat production, egg-laying skills, and as a winner of egg-laying contests. The breed was first imported into the US in the 1920s, but still, no name was given to this award-winning breed. They were recognized in The Standard of Perfection in 1929 and were named 'Australorp'.

There was a time the Australorp was considered 'endangered', but at the moment, the breed is no longer on the endangered list and is recovering.

Although Australorp chickens won plenty of egg-laying competitions in the 1920s, with the number going up to 364 eggs yearly, most backyard Australorps won't lay daily. They're excellent egg layers, though, laying between 250 and 300 eggs per year; that's 5 or 6 per week! This breed usually starts laying at 5 months of age, although this depends on bird to bird.

Their eggs are medium to large in size, and all are light brown. As Australorps are cold-hardy birds, they'll probably keep on laying during the winter, although egg production can temporarily slow down.

Australorp chickens are heavy birds that tend to fatten easily when kept in captivity. It's no problem to keep your chickens in an enclosed pen, but an Australorp needs some free-ranging time to stretch its legs and keep active. If your chicken gets overweight, it can influence its egg production. It's best not to let your Australorps get overweight.

Hens can go broody occasionally, which is something to keep in mind if you're not planning on hatching eggs. Broodiness will temporarily stop egg production, so take them off the nest frequently if you don't want your chickens to sit on the eggs.

Australorps descend from Orpingtons, known as the gentle giants, and they inherited their lovely and friendly personality. Australorp chickens are a great addition to any backyard flock; they'll get along with other chickens and are great to have around children. Even the roosters are rarely assertive or aggressive. However, because of their size, they're not suited as lap chickens for kids, and the bantam version can be a more appropriate choice.

Due to their friendly nature, they're best placed with other friendly breeds, like Orpingtons, Faverolles, or a Sussex. They'll probably be the biggest of the bunch but are not assertive or aggressive toward other chickens. Australorps are also curious and active; they'll love following you around in the backyard while doing chores.

As said before, Australorps tend to fatten easily when kept in captivity, which can negatively influence their egg-laying skills. If you have the space and possibility, let them free-range, at least for most of the day. They thrive in a free-range environment! And don't worry, they'll find their way back to the coop once dusk comes and its time to go to bed.

Australorps are rather large birds, so they need more space than smaller breeds like Silkies or bantams. Always ensure your flock has plenty of space to dust bathe, stretch their legs or roam around; it'll keep them happy and healthy. If you're unsure how much space your chickens need, check out our 'Coop Size Calculator'.

Australorps are low in maintenance, beginner-friendly, and hardy birds. They don't need much extra care besides water, food, and shelter. They're an overall healthy and robust breed. Because of their black plumage, Black Australorps will need extra shade and shelter during the hot summer months.

If you're looking for a sturdy, sweet, and active chicken that's also a great egg layer, the Australorp is the right breed for you! They're beginner-friendly and low in maintenance, making them an excellent addition to any backyard flock. Australorps descend from Orpingtons, also known for their friendly personality.

Australorps lay up to 300 eggs yearly, all light brown and medium to large in size. They're a dual-purpose breed, meaning they can be kept for both meat and eggs.