Home > Breeds > Buff Silkie: All You Need To Know
Breeds

Buff Silkie: All You Need To Know 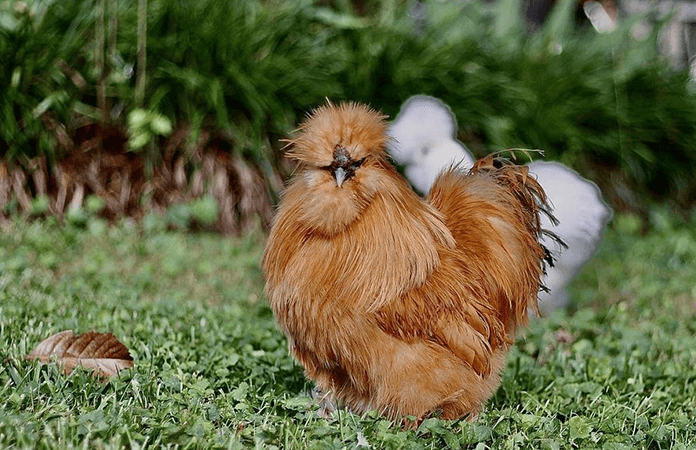 Silkies are widely known because of their fluffy appearance and friendly nature. They make excellent pet chickens. But there are more unusual characteristics to this breed, including their various colors, like Buff. Buff Silkies look like golden fluffballs and are gaining popularity each day.

Let's see what the fuss is about.

Even when you're not a true poultry connoisseur, chances are, you'll recognize a silkie chicken immediately! They look nothing like an 'ordinary' chicken, like a Leghorn, a Rhode Island Red, or a Plymouth Rock. Silkies have unusual characteristics and, therefore, are bred as ornamental bird or to exhibit in poultry shows.

Silkies are miniature chickens, with roosters weighing around 3 pounds (1.3 kg) and hens up to 2 pounds (900 gr). This can make you consider whether Silkies are a Bantam breed. Some countries classify Silkes as Bantams, but most don't and register them under regular 'Large fowl'. Silkies come in both bearded and clean-faced varieties.

Silkies differ in many ways from other chicken breeds; it's almost impossible to imagine they are the same species.

Main unusual characteristics of a Silkie:

Silkies are a black-skinned chicken breed. The most know chicken with black skin is probably the Ayam Cemani, but the Mystic Onyx, which originates from Silkies, is also a black-skinned bird. Black skin in chickens is far from ordinary; imagine ordering a chicken filet, and the meat you get is black! That's also why most breeds are bred to have white or yellow skin; customers prefer white to even pinkish chicken meat.

The disorder responsible for black meat and skin is a genetic abnormality known as fibromelanosis. This causes a distribution of melanin in the skin, eyes, bones, and muscles, making them all black or very dark. Fibromelanosis does not always affect the feathers, that's why Silkies' skin and bones are black, but the plumage can be of various colors.

Most chickens have four toes, but some breeds, such as Silkies and Faverolles, have five or even a sixth toe! Silkies are an ancient chicken breed whose five toes result from a genetic malfunction called polydactyly.

Because of their extra toe, it's essential to regularly inspect their feet as they can be more prone to bumblefoot, frostbite, or scaly leg mite. You don't need to bathe your chickens, as this can do more harm than good; a quick inspection of their feet every couple of weeks shall do.

All silkies, both hens and roosters, should have turquoise-colored ears. Not all Silkies are born with blue earlobes, most develop them after five months of age, or some don't. But a Silkie show bird should always have blue earlobes to enter poultry pageants.

Lack of 'hooks' on the feathers

Most backyard chickens aren't very good flyers; they can't fly because of their body weight and short wingspan. But they can perform short, intensive flights to get them where they want to be. Or flap over the fence to visit your neighbors' backyard.

Silkies are the exception to the rule, as they can not fly due to their unique feathering, as Silkie feathers look nothing like regular bird feathers. Their feathers lack the tiny hooks that generally attach to barbules on the feather's shaft; the pattern is called hookless feathering. Normal chicken feathers are smooth and have a thick shaft running down the center, with feather hairs growing on each side. These 'hairs' stick together with feather barbicels, which create a smooth and waterproof surface.

Silkie feathers look entirely different as they lack these hooks on the barbicels and the ability to stick together. This leaves all feather hairs separate and creates their distinguished fluffy look. It looks like a chick's down instead of full-grown feathers.

Silkies come in many colors, such as millefleur and mauve, but only eight colors are recognized if you want to enter poultry pageants: splash, blue, black, lavender, grey, partridge, white, and Buff. Buff Silkies have a beautiful golden brown color that develops into a deeper gold after every molt.

Buff is not the most popular color in Silkies; that honor is for White, and there are multiple reasons. First of all, a crisp white Silkie has the looks of natural white silk. They look stunning with their snowy feathers, almost like they escaped a fairy tale. Secondly, a buff-colored Silkie is much harder to breed than a white Silkie.

Color and breeding genetics in chickens is a complicated process; it doesn't necessarily mean that 1 + 1 equals 2.

It isn't well-documented when and where the first Silkie chickens appeared, but the most reliable sources mention ancient China. Silkies were most likely imported to the West via the Silk Route, and the American Poultry Association recognized the breed in 1874.

At this moment, Silkies are the most popular ornamental chickens worldwide. And due to their extremely high broodiness are often used to incubate other breeds' eggs.

As mentioned before, Buff is one of the least understood varieties of chicken colors. To hatch a chick with the Buff color, the chicken must:

This makes it more understandable why breeding buff colors isn't that easy. If you want to learn more about breeding and genetics, check out our 'Breeding & Genetics' article, or go to 'Linebreeding, Inbreeding, Outcrossing'.

Silkies are ornamental birds, which makes them not specially bred for meat or eggs but mainly for their looks. However, Silkies are decent egg layers, laying around three eggs per week, which should result in 160 eggs per year.

But, there's always a but; Silkies are extremely broody chickens, and egg production will always temporarily stop during broodiness. They're the most broody chickens worldwide and are often used to hatch other hens' eggs. Keep this in mind when you're not planning on hatching eggs.

Silkies are also not keen on laying during the winter; however, some Silkies will still bring you an egg once in a while during cold weather.

Therefore, it's more likely to keep in mind that they'll lay up to 100 eggs annually. All eggs are small in size and cream to tinted in color.

Silkies make excellent pet chickens as they are friendly and sweet birds. They can be kept inside the house or around the apartment to keep you company. And they make great pets for your children!

You can keep them inside for cuddling and petting or learn them to do tricks. But in the end, all chickens, including Silkies, need outside space to run around and scratch their feet in the dirt or take a dust bath. If you want to keep Silkies inside, teach them to wear a chicken diaper so things won't get messy.

Another reason you may want to keep Silkies temporarily inside the house is that they are vulnerable to predators. Because of the fluffy feathers that cover their eyes, they have trouble seeing which means they can't see predators approaching. Another disadvantage is they can't fly, so it's hardly impossible for them to escape from predators when under attack. When keeping Silkies, protect the chicken run to keep them safe.

Because Silkies are miniature and kind, they can get bullied when you place them with more assertive breeds, such as Rhode Island Reds. Only keep Silkies with calm and docile breeds, like Faverolles, Orpingtons, Frizzle chickens, or other small breeds.

As their feathering looks like a chick's down, it's best not to keep them in a muddy and wet run. Their plumage is not waterproof, so you'll need to provide enough shelter during wet and cold months.

The Silkie chicken is the right breed for you when looking for an excellent pet, but it doesn't necessarily need to bring you many eggs. They're friendly and docile and love human attention. Buff Silkies are popular due to their golden-brown look, resulting from a complicated color breeding process.