Home > Breeds > Faverolles Chicken: All you must know
Breeds

Faverolles Chicken: All you must know 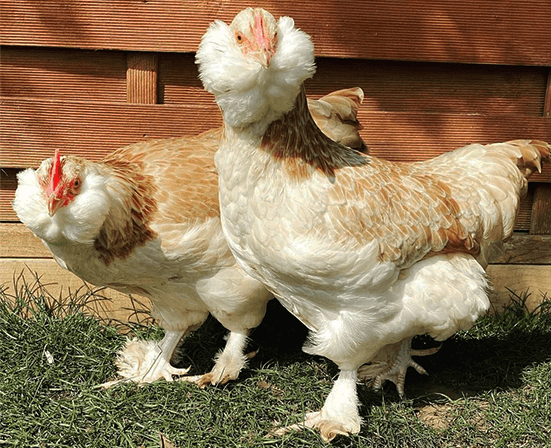 Are you thinking about keeping a Faverolles chicken? That's great! But there are some things to remember when caring for this French fluffy breed. Let's find out all there is to know about the Faverolles bird.

We'll start by addressing the most important topics:

Faverolles chickens have a distinctive look, with their large body, fluffy beard, and muffs. These bearded beauties are large and heavy birds suited for meat and egg production, but more giant chickens are available on the market.

Faverolles have five toes on each foot, like Silkies. They're fluffy and heavily feathered with plumage on shanks and toes.

The Salmon color is exclusively found on the Faverolles chicken and, therefore, is unique for this breed.

The breed is quite large and heavy, being a dual-purpose breed bred for meat and eggs. According to the British Standard, roosters weigh approximately 11 pounds (5 kg), and hens are tipping the scale at 9 pounds (4.1 kg). But the Standard of the United States refers to a smaller bird, at only 8 lb (4 kg) for roosters and 6 lb (3 kg) for hens.

The fluffy breed originates in Faverolles, a village in North-Central France in the 1860s. Therefore, the name 'Faverolles' is always written with an 's', even in the singular form, but it's a silent 's', so you don't need to pronounce it.

By cross-breeding multiple chicken breeds; Houdan, Brahma, Malines, French Rennes, and Dorking, the Faverolles was developed. The breed was introduced into the US in the first years of the previous century and soon gained popularity. In 1914 the Salmon Faverolles was recognized by the American Poultry Association, followed by White in 1981. These are the only colors officially recognized by the APA today.

Faverolles were initially bred as dual-purpose birds, but nowadays, there are far better options for meat and egg birds. Currently, the breed is mainly kept for its show qualities and to participate in exhibitions.

Faverolles are decent egg layers, laying three to four large eggs weekly. That's up to 200 eggs per year! They start laying at the age of 20-22 weeks and continue to lay during the winter because of their cold hardiness.

Faverolles hens are not extremely broody birds, but they occasionally go broody. They are good mothers and keep in mind that egg production will temporarily stop during broodiness.

There are plenty of articles to be found online telling you a Faverolles lays pink or purple eggs. But we have to be honest; most Faverolles hens lay brown eggs, so don't be disappointed if you find a 'boring' normal-looking egg in the nesting box. However, some eggs of Faverolles look pinkish or purple, resulting from reddish pigments in the bloom, the protective cover on the egg's surface.

Faverolles are genetically predisposed to produce pink blooms that make the egg look pink. When a reddish bloom covers a light brown egg, it creates a pinkish shine. The base off-white shell color mixes with the reddish bloom and turns the egg pastel pink.

Faverolles make great pet chickens. They're sweet, friendly, and kind and are a great asset to your backyard chicken flock, especially when having small children running around. The breed is not aggressive or assertive; even the roosters are known to be quiet and calm.

However, this gentle nature also makes them an easy target for bullying as they are seldom on top of the pecking order. It's best not to keep Faverolles with assertive breeds such as Rhode Island Reds or Wyandottes. Look for calmer birds, like Orpingtons, and Silkies, or keep a flock of only Faverolles.

Faverolles are great foragers but are also happy in confinement. Just make sure they have enough space inside the run and coop. They can be kept in any climate because they're cold and heat-hardy. But remember that any bird needs extra attention in extreme weather circumstances.

Faverolles are bearded beauties known for their stunning looks. They're quite large birds and, therefore, a dual-purpose breed, but they're mainly kept for their show qualities. Faverolles are incredibly kind and friendly chickens, which makes them a favorite pet chicken.

It's best not to mix them with assertive breeds, as Faverolles may be bullied. They lay up to 200 eggs per year, some of them with a pinkish color resulting from reddish pigments in the bloom, but most eggs are brown.

To learn more about chicken breeds, check out our 'Chicken Breeds Page' to see every specific breed we address. Or go to our listicle breed summary on 'The Classroom', or, if you're unsure where to start, take a look at our 'Chicken Breeds: Ultimate Beginners Guide'.'.