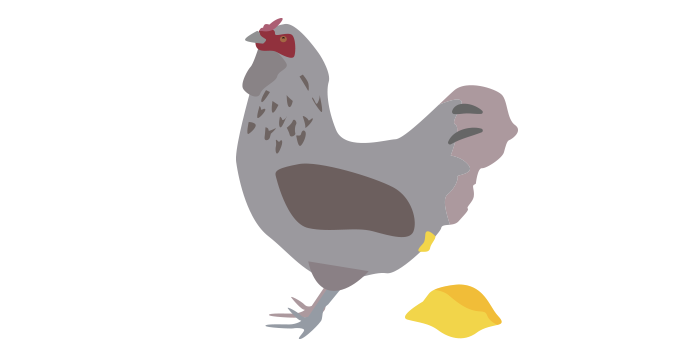 Yellow diarrhea in chickens looks scary. Diarrhea is problematic, but if it's yellow, all alarms go off. What's the culprit of these liquid droppings, and what should you do?

Causes of Yellow Diarrhea in Chickens

There are many reasons for liquid poo. Sometimes it's nothing to worry about. It might be cecal poo or chickens dropping water to cool down. But diarrhea can also result from diseases and infections with bacteria, viruses, or parasites.

Yellow droppings are not a problem per se. It's usually just coloration due to eating a lot of yellow grains.

However, when diarrhea turns yellow in chickens, this is a sign of:

Let's go over this list to see when you need to worry.

Issues with the liver or gallbladder

Yellow diarrhea can indicate a condition in the liver or gallbladder of a chicken.

The liver plays a vital role in the chicken's body regulating chemicals and processing toxins in the blood. It produces bile juice and excretes cholesterol, hormones, and drugs. Whenever something disrupts the standard liver processing, yellow discoloration is a common consequence.

A good example is jaundice: a condition where the liver can't process bilirubin, a yellow-orange substance in the blood causing the skin to turn yellow.

The gallbladder is a greenish-yellow organ lying behind the liver that helps digest fat and stores bile.

Multiple infections can target the liver and gallbladder in chickens:

These can cause inflammations that cause yellow discoloration. Infected livers swell and turn yellow. With severe infections, the entire gallbladder is mustard-yellow colored.

Inclusion body hepatitis is a viral disease in chickens caused by the adenovirus. It causes sudden deaths in chickens and will kill about 1 in 10 chickens in a flock.

Some noticeable symptoms include:

It causes underlying conditions in the liver. The liver swells and turns yellow. If you've ever seen bruises turning purple and yellow, you've witnessed some of the same processes in the infected liver.

Bacteria can infect the small/large intestines and disrupt the microbiome of a chicken's guts, resulting in liquid droppings.

Multiple bacterial infections can result in yellow diarrhea in chickens.

Bacterial infections can be treated with antibiotics. Depending on the disease, several antibiotics can be appropriate. Extra supplementation with probiotics helps to restore the chicken's flora.

Sour crop or candidiasis is an infection of the chicken's crop caused by an overgrowth of the yeast Candida.

A chicken's crop is a small pocket where swallowed food builds up before it's passed to the stomach. It's a buffer that allows chickens to eat more than their stomach can process in one go.

The Candida yeast is always present on a chicken's skin and inside the body. In certain conditions like stress, illness, use of antibiotics and medication, the yeast can go into overdrive and cause an infection in the crop.

Common symptoms of Sour Crop are:

You can try to empty the crop with some apple cider vinegar in mild cases. In severe cases, a veterinarian has to flush the crop.

Blackhead disease is a worldwide parasitic disease caused by the protozoan parasite Histomonas meleagridis. The disease is almost always fatal for turkeys but is less severe for chickens, although it can still wipe out 10% of a backyard chicken flock.

The parasite causing Blackhead disease is piggybacking on a cecal worm. Sometimes these cecal worms use earthworms as an intermediate host to infect chickens.

The cecal worms infect the ceca of the chicken and hatch their eggs in the intestines. Worms disturb the natural microbiome and can damage the intestinal walls.

The disease can not be cured, but secondary bacterial infections can be treated with antibiotics.

Ochratoxicosis is poisoning by specific mycotoxins, toxic substances produced by fungi. They have a wide variety of harmful effects on chickens.

A widely cited FAO estimation states that 25% of the food and grains are contaminated with mycotoxins. A study in 2019 reported that this number might be highly underestimated and can be up to 60% or 80%. Apart from grains in livestock, one of the most significant sources of mycotoxins is grapes. We have an in-detail discussion about whether chickens can eat grapes. Mycotoxins are an essential part of that discussion.

And last but not least: yellow diarrhea

A chicken's diet may turn its poo yellow, and diarrhea on its own is a symptom of many diseases but can be relatively innocent.

However, yellow diarrhea is a critical sign of severe illness.

What causes Yellow Diarrhea in Chickens?

Yellow diarrhea indicates liver or gallbladder damage. Several bacterial infections cause greenish and yellow diarrhea in chickens, but the culprit can also be a virus, yeast, or parasite. Inclusion Body Hepatitis, Sour Crop, Blackhead Disease, and Ochratoxicosis are all different causes of yellow diarrhea.

Always contact a veterinarian for a correct diagnosis, as chickens have multiple possible causes of yellow diarrhea. Many of the diseases above are severe and fatal for backyard chickens.