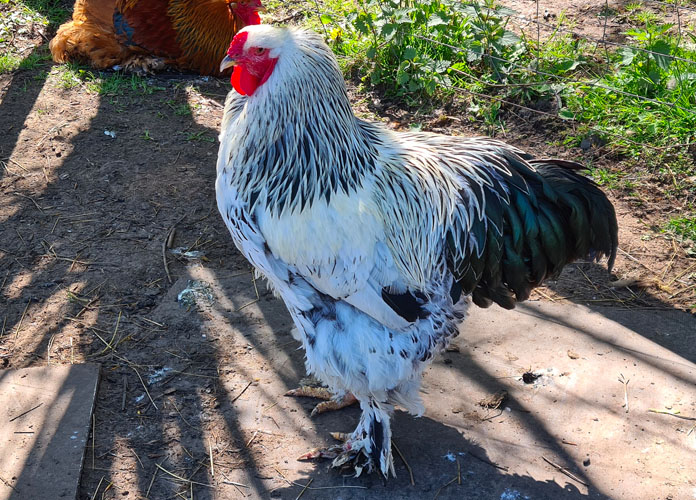 Brahma chickens are stunning giant chickens called King of Poultry. Originally from the Far East, they were responsible for the Hen Fever. There is a lot to say about these big royal chickens.

Let's have a closer look.

Brahma chickens are giant, impressive, heavy-weight robust chickens with striking beauty. The roosters tip the scale at ten to twelve pounds, and the hens come in at eight to ten pounds. They look massive and carry a lot of feathers.

These feathers extend to their legs and cover their toes. Brahmas have big wide heads, a pea comb, and what looks like overhanging eyebrows. With their 30 inches and evil look, they can look pretty scary. Since they are so massive, they aren't the most proficient flyers of the flock. You won't need too high of a fence to keep them locked in.

Brahmas come in light, dark, and buff variations. However, many other (non-standard) variations exist with astonishing color patterns. There is also a Brahma Bantam miniature version.

In the early 20th century, Brahma chickens were bred to be dual-purpose roasting fowl. They were an important source of meat for the Sunday dinner table. Over the years, many Brahma strains were bred to be beautiful rather than utility breeds. The hatchery breeds are usually smaller and less vibrant.

The amount of eggs depends on the strain you have in place. Some lines are proficient egg layers and will get you up to 300 large brown eggs yearly. Other lines, bred for beauty, will only provide 150. The pullets tend to be relatively late to start laying.

Brahmas are popular because they lay during the winter period. They will lay most of their eggs from October to May. These queens are ideal chickens to add to your regular flock as they guarantee a steady flow of eggs over the year.

Some hens will go broody in the summer. If you let them hatch the eggs, take some precautions to prevent them from trampling their day-old chicks.

Brahmas are calm and docile chickens that are happy to live in confinement. They are usually the tallest flock members, and the smaller birds won't bother them at all. Brahma chickens won't usually get into fights.

They are also pretty good with people but generally too big to keep as a lap chicken. Especially for children, as they are too heavy to lift from the ground.

They usually stick around the coop and aren't too wide-ranging. Brahmas are laid back and won't scratch the soil like Leghorns or other lightweight Mediterranean types.

Brahma chickens are very cold-hardy and have always been popular in northern climates. With their large body, fluffy tight feathering all over their body, and small pea combs, they are built to survive in the cold.

Unfortunately, this also means they can't stand a lot of heat. So they are far less ideal for keeping in hot climates. If you live in a hot summer climate, ensure you take appropriate actions to keep your chickens cool.

The story of the Brahma chickens starts back in 1800. Brahmas were imported from very large fowls into the United States via the port of Shanghai in China. The original bloodline stems from the original Shanghai breed, nowadays the Cochin.

Some scientists believe that Brahmas got their combs from ancient Indian Chittigong fowls. The mixing of Chittagong and Cochins was the start of the Brahma strains. In the mid-19th century, the name Brahma was coined on a printed page of The Northern Farmer.

At that time, the young Queen Victoria of England had a collection of exotic birds. The British explorers were conquering the world, and every time they came back from an adventure, they brought along a couple of exotic animals for her collection as a souvenir.

In 1842 she got her hand on seven traditional Cochin chickens from China. These elegant chickens were breathtaking compared to the dull egglayers in England. She added other Shangai breeds to the mix and spent hours in her royal chicken run enjoying her remarkable bred chickens while sipping some tea. Whenever she had some fertile eggs, she distributed them to her Victorian friends all over Europe.

The birds made it into magazines and papers and became the hype in Europe. George P. Burnham later described the curious chicken craze in his book The History of Hen Fever. Eventually, the Hen Fever made it to the United States. With the Boston Poultry show in 1849, thousands of people came to watch the exotic birds.

One prominent breed rose above all others during the Hen Fever: the robust and fluffy royal Brahma. The Brahma was crowned as the King of all Poultry. In 1852, George Burnham sent a couple of Brahmas to Queen Victoria as a gift. A marketing stunt that worked well for Burnham, as the price for a couple of Brahmas was suddenly tenfold the original price. His strains later became the foundation for the Dark Brahmas.

When the bubble of the Hen Fever busted, the price of the Brahma chickens dropped drastically. Brahmas became a dual-purpose breed, and the chickens were repurposed as a Shanghai dinner.

The light Brahmas are white, with black pigments in the hackles and tail. The white roosters also have some color on their saddle feathers. Buff Brahmas resemble the whites but have a golden ground color.

Dark Brahma hens are dark gray, black penciled, and have some dark in their hackles, like the white Brahmas. The dark Brahma roosters are a combination of black and white: they have black and white hackles, saddle feathers, and a black tail.

Since 1946, the American Poultry Standard of Perfection describes a Bantam version of the giant Brahmas.

Other standards, like the British and Australian standards, describe different variations on top of those three, such as:

One of these non-standard lines is the Brahma variation created by the American breeder-geneticist Dan Powell. In 2000, Dan started his project on breeding Silver Laced Brahmas and Buff Laced Brahmas. The Buff Laced Brahmas have a light rim on the edge of their feathers, a pattern that he loved. This design is very unusual for giant chickens, and it's the only heavy-weight breed fowl that boasts the buff laced color pattern. The lacing is usually seen in smaller birds, like Polish chickens.

Dan Powell's mission is as beautiful as the birds themselves. He wanted to create the Buff-Laced Brahmas as a candle held against the dark abyss of the ugly monoculture of factory farms. The supreme elegant Buff Lacing pattern symbolizes the romantic agrarian roots, reminding us of the melancholy of an abandoned old barn.

Despite his romantic soul, he insisted on merging beauty and utility throughout his project. The result of his effort is beautiful birds that are still laying about 150 eggs yearly. Like any Brahma, Powell's Silver- and Buff-Laced Brahmas are very cold-hardy and, as he claims, take little notice of the coldest Wisconsin winters.

The Dan Powel Brahmas are slightly smaller than their regular counterparts. They have feathers on their legs and toes and have pea combs. Since Dan is out of business, his rare lines are in very popular demand.

Brahma chickens are giant, stunning chickens with unique personalities. As the King of Poultry, they are gracious and sit on top of the pecking order. Originally from the Far East, they were responsible for the Hen Fever and became one of the most wanted chicken breeds in American history.

They are covered in feathers from top to toe and are very cold-hardy. Brahmas lay eggs during wintertime and are an excellent choice to ensure a steady flow of eggs throughout the year. The standard variations are Light, Black and Buff, but many other variations exist. All variations come with stunning patterns and colors on an impressive bird.