Polish Chicken: Things To Know Before You Buy 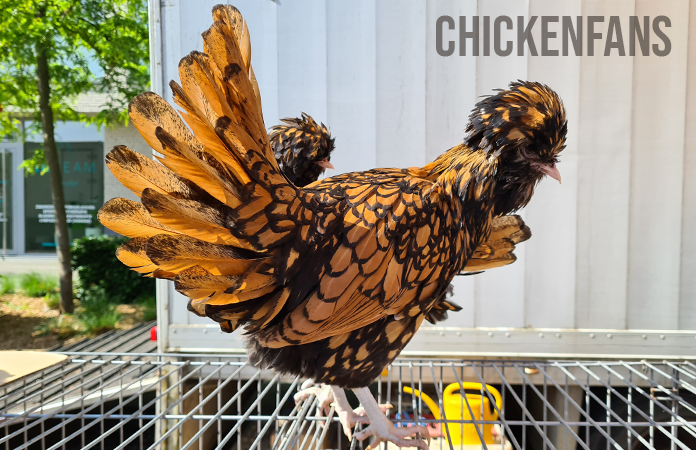 Polish chickens, or Padua chickens, are extremely popular with chicken keepers with children. They don't look like any other chicken, and due to their extraordinary looks, and decent egg-laying skills, they're a favorite pet chicken. However, they need more care than a hybrid, so it's best to be prepared!

Let's find out all there is to know about this crested beauty.

This breed has an iconic look which makes them famous as pet chickens. They're an absolute favorite for chicken keepers with families, as children love their weird plumage. All Polish have a distinctive tuft or crest of upward-pointing feathers on the head that look like a pom-pom. Their bright red comb has a v-shape, but the abundance of feathers often hides it.

Polish are medium-sized birds with an upstanding posture. Their body is relatively short but have a large, widespread tail. Roosters weigh around 6 pounds (2.7 kg) and hens approximately 4.5 pounds (2 kg). There is also a Bantam miniature version available of the Polish with roosters tipping the scale at 30oz (850gr) and hens 26oz (740gr).

Their legs are clean, meaning no feathers are growing on the shanks. The earlobes are white but not always visible due to the dense feathering. Wattles are bright red.

The exact history of the Polish breed remains unknown, although birds that look a lot like Polish chickens are seen in paintings as far back as the 1400s, 1500s, and 1600s. It's also uncertain that they originated in Poland because it is believed the Spanish imported Polish chickens into Holland in the 16th century. We can only guess which birds are this breed's ancestors and how they were brought to Europe.

The only certain thing is that in the 18th century, dutch poultry keepers refined this breed by developing the color patterns and their crests. It's believed the Polish arrived in the US around 1840 and were already widespread ten years later.

So, the name 'Polish' could have nothing to do with their origin, as it's unsure where this breed finds its origin. In The Netherlands, Polish chickens are known as Padua chickens or 'Hollandse Kuifhoen', literally translated as 'Dutch crested hen'. There is no reference to Poland. The name 'Polish' was given to any crested chicken by Charles Darwin, probably because of the resemblance of the tuft to the feathered caps worn by Polish soldiers.

The first varieties of the Polish breed were accepted in 1874 in the American Standard For Perfection. Polish chickens are available in several varieties: White Crested Black, Black Crested White, Bearded, and non-bearded.

At this moment, Polish chickens are mostly kept as exhibition birds, but this wasn't always the case. When imported to the US around the 1840s, the breed was known as an excellent layer and was kept for egg production. But, after a few years, the Leghorn got introduced. And as the Leghorn is a real egg machine, poultry keepers soon lost interest in the Polish chickens as an egg layer and were kept as show birds.

Polish are not the most productive chickens, but they still lay a decent amount of eggs yearly. They tend to start laying a bit late in the season, but once they get started, they're unstoppable. Polish chickens bring around 150 eggs per year to the table, that's three to four per week, except during the winter. A polish hen's eggs are medium-sized and white.

Polish hens rarely go broody; they're not very good sitters if you're looking for a hen to hatch eggs. But on the other hand, as they don't go broody, you'll have a reliable egg supply, except during winter.

Polish chickens don't only look cute; they make excellent pet chickens, as they love the company of humans. They're calm, docile birds that are a great choice if you have small children. They can, however, be curious and flighty. It's not uncommon to find a Polish roosting in a three instead of the coop.

Together with Silkies, and Frizzle chickens, Polish are a popular family choice because of their friendly nature, decent egg-laying skills, and cuddliness. The main difference between keeping Polish or Silkies is that Silkies quickly go broody, and Polish don't, which is something to keep in mind when you're not planning to hatch eggs.

Because of their massive crest, they can't see very well. Polish chickens are, therefore, skittish and scared easily, especially when you approach them without making noise. It's always best to let a Polish chicken know you're on your way by talking to them or making plenty of noise when coming closer. They need a bit more extra pampering than other breeds if you want them to become lap chickens or pet them.

Polish chickens are not the most confident birds and are mostly low in the pecking order. They can be bullied when placing them with assertive breeds, so before adding extra chickens to your flock, always check the breed's character.

Breeds to avoid because of their dominant nature: Rhode Island Reds, Wyandottes, Plymouth Rock. These breeds are not aggressive but tend to be high in the pecking order and are much more assertive.

Polish chickens don't like cold and wet climates because their crest can get soaked and cool down the bird. They prefer to be kept in warm and dry climates and are heat-hardy when provided with shade, shelter, and water.

Polish chickens can be easily recognized due to their unique characteristics. Their crested feathers look like a giant pom-pom. They're an excellent addition to your backyard flock; kids love them! However, there are some things to consider.

Polish do not like cold and wet weather and are best kept in dry and warm climates. They're not very confident birds and are mostly low in the pecking order. It's best to keep them with friendly breeds like Silkies, instead of assertive breeds like Rhode Island Reds.

Because of their massive crest, they can't see very well and can be quite skittish. If you're willing to give them extra care and attention, they'll reward you with up to 150 eggs per year.