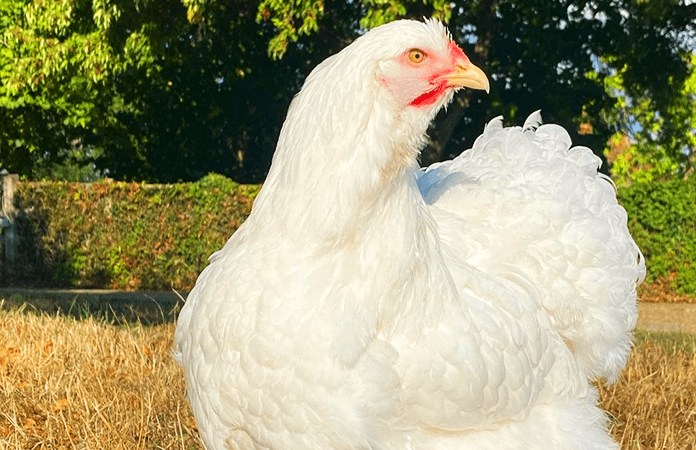 The Cochin chicken is among the heaviest and largest chicken breeds in the world, and because of its fluffy and unique appearance, it is quite popular on social media. The breed is not to be mistaken with the Cochin Bantam or Pekin Bantam; they're unrelated, say poultry experts, although they look alike.

If you're considering keeping a Cochin in your backyard, there are some things to consider. We'll address the essential topics and why you'd love to add a Cochin chicken to your flock.

The Cochin chicken has distinctive characteristics, with the fluffy feathered feet being the most prominent. They are classified as an Asiatic breed. This class contains two other well-known chicken breeds: Brahma and Langshan. Cochins are a giant breed; full-grown roosters weigh up to 12 pounds (5.5 kg), and hens around 10 pounds (4.5 kg).

Their largeness makes them look impressive and even scary, but there is nothing to be alarmed about. Cochins are extremely friendly and docile birds that greatly add to any backyard flock. Families with small children like to keep them as pet chickens; they can be petted and picked up.

Cochins are easily recognizable due to their excessive foot feathering and dense plumage, giving them their fluffy appearance. All Cochin chicks are born with feathers on their feet. The dense feathering all over their body makes them very cold-hardy, and they stand extreme weather quite well. But it also makes them not fond of wet environments and muddy pens, as their toes are prone to frostbite, and mud can get caked around the feathers. Make sure you place them in a dry area of the backyard.

The breed was specially bred to participate in competitions, not a meat bird, and today the chicken is mainly kept as an ornamental bird. Both hens and roosters have a rounded single red comb; a rooster's comb is mostly bigger. Wattles and earlobes are red. Their skin color is yellow. A Frizzle version of the Cochin chicken is also available, with feathers standing upward.

Due to their build, Cochin chickens are prone to obesity. They're also quite lazy and not the best foragers. To keep them healthy, don't feed them too many table scraps.

It's believed the Cochin chickens were exported from China to Europe and North America in the 1840s and 50s. They were first known as Shangai birds, referencing the Eastern Chinese city, and after that, the breed was referred to as 'Cochin-Chinas'. The original bloodline from Brahma chickens stems from the original Shanghai breed.

The striking appearance of the Cochin and the Brahma inspired many people to keep backyard chickens for the first time; this period is known as Hen Fever.

Although the Cochin was initially bred as an all-round breed, they never became commercially interesting as a meat or egg bird. It takes up to 16 months to develop a Cochin into a meat bird, much longer than most meat birds. And with the upcoming Leghorn and other excellent egg layers, the Cochin was not the best egg-producing bird eighter.

They're mainly kept as show birds or ornamental birds. The breed is such a friendly and cuddly species, so they make an excellent pet chicken, even for those not participating in poultry shows.

Cochin chickens are not the best layers, although not the worst eighter. They lay up to 150 eggs per year, that's 2 to 3 weekly. All eggs are light brown to brown and large. Because of their cold hardiness, Cochin chickens keep laying during the winter, even with temperatures below freezing. Although this doesn't mean egg production can't decrease during this time of year.

Cochins are considered, together with Silkies, to be the broodiest chickens in the world. They're often used to hatch another hen's chicken eggs. Their broodiness is something to keep in mind if you're not planning on hatching eggs, as it temporarily stops egg production. If you don't want your chicken to sit on eggs, you'll have to take her off the nest frequently until broodiness stops.

Cochins are a bit slower to mature, meaning they'll reach sexual maturity later than most breeds. The hens start laying around the age of 8 to 9 months, whereas most chickens lay their first egg around the age of six months. The first eggs of a newly laying chicken can look a bit odd; some are soft-shelled, some have a weird texture, or sometimes a chicken lays a miniature egg, known as a fairy egg. It's nothing to be alarmed about if it happens occasionally.

Cochins are extremely friendly and docile birds, and even roosters are known never to be aggressive or even assertive. They make great pet chickens and can be easily tamed and picked up. They're a great addition to any backyard flock, especially when having small children; they'll love these fluffballs.

As they aren't dominant, it's best to keep Cochin chickens together with other large but gentle breeds like Orpingtons, Faverolles, or Australorps. Don't place Cochins with assertive breeds, like Rhode Island Reds, Green Queens, or Wyandottes, as they may be bullied.

As said before, Cochin chickens are very cold-hardy and thrive in colder temperatures. Because of their dense plumage, they stand cold weather better than many other chicken breeds. But this also means they're not the best breed to keep in a tropical environment, as they don't do well in hot weather. Remember to take extra precautions to keep your chickens cool when a heat wave is on its way.

If you're not planning to let your chickens free-range and are looking for a breed that's fine in confinement, the Cochin chicken is a great choice. They're pretty lazy and won't wander off very far. Because of their weight, they can't jump very high or fly, so they won't escape the run and visit your neighbors. This makes them excellent backyard pets when living in a suburban neighborhood.

Cochins are a healthy breed and very beginner friendly. They don't need much extra care besides food, water, and shelter. They are, however, prone to obesity because of their build and lack of foraging skills. Remember only to feed them quality chicken feed, and avoid giving them treats or table scraps.

Because of the feet and shank feathering, they aren't fond of muddy and wet environments. Ensure their pen is located in a dry area of the backyard. During winter, their toes can suffer frostbite if their run isn't dry enough. Next to frostbite, Cochins can suffer additional foot problems because of their weight. When accidentally jumping or stepping on something sharp, their body weight easily hurts the bottom of their feet, creating bumblefoot. Chickens with feathered feet should have their legs and feet checked for bumblefoot, fungi, and minor wounds, preferably biweekly.

The Cochin is a beautiful feathered, fluffy chicken with an extremely friendly personality. They're great pet chickens that can be petted and picked up. The breed is primarily ornamental; they're not the best egg layers nor the best meat birds, but hens still lay a decent amount of large eggs, up to 150 per year. They're highly broody, which is something to keep in mind if you're not planning to hatch eggs.

Cochins are sweet and docile and should be kept with other friendly breeds so they won't be bullied. They're very cold-hardy but don't stand hot weather very well.