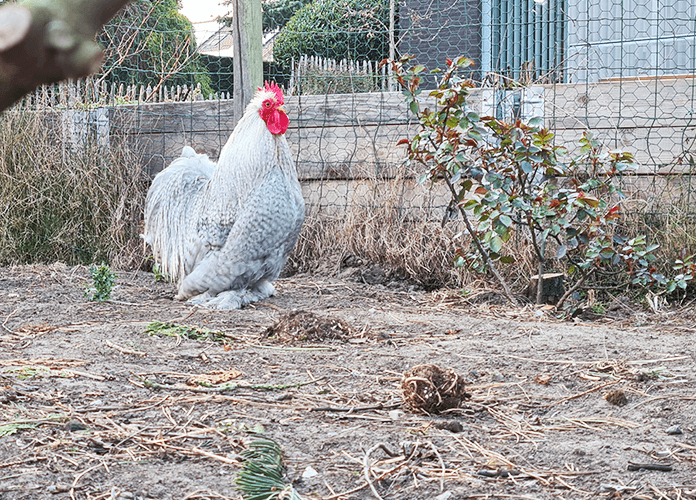 As we all know, some animals are happier when they are part of a group, whereas others don't mind living a solitary life. It has less to do with personality and more with the nature of the species.

Which brings us to the question: Can chickens live alone?

No. Chickens are sociable animals who like being part of a flock and are happier when in the company of others. But that doesn't mean they'll like each other. Chickens don't need a flock to make friends, but for the well-being and security it provides them.

A predator attack or diseases like coccidiosis or Newcastle disease can wipe out almost an entire flock. What can you do when you only have one chicken left? Especially after the visit of a predator, having new chickens isn't an easy decision, as you don't want an event like this to happen again. It would be best to think about it because housing only one chicken isn't a long-term solution. It may work for a couple of weeks, but the remaining hen will start to feel abandoned and sad after some time.

Keeping at least three chickens is recommended, but keeping two is an absolute minimum.

All chickens inside the chicken run from their own community, where every chicken has its assigned tasks and chores. They dust bathe, eat, and sleep together, and some chickens even like to preen each other. Hens copy each other's behavior, so when one hen becomes broody, chances are high that the others will follow quite soon. They bond with fellow flock mates and develop a close relationship. Some chickens can even become so close they'll mourn over each other's death.

This doesn't mean all hens inside the flock will get along. The primary purpose of chickens keeping each other company is not to make friends but to be safe and at ease. So don't panic if some characters won't be a good match; overall, the herding community is powerful.

Every flock has a clear pecking order and every chicken has its place. When owning a rooster, he is on top of the pecking order, the boss of the coop, and his main task is to mate with his hens and protect the flock. If you don't have a rooster, the dominant hen will take his place. All remaining hens are higher or lower in the pecking order, and each has its task in the flock.

A pecking order can look cruel to us, as determining their place can be pretty violent. But this arrangement brings peace and tranquillity to the run and makes the tasks and chores understandable and clear for each flock member. However, you should not tolerate bullying as it can result in serious injuries or even death.

Being part of a group makes chickens less vulnerable to predators. Chickens are prey animals, and without the help and presence of others, they don't stand a chance when under attack.

What to do when down to one chicken?

Age, health issues, diseases, or predator attacks can be reasons why the size of your flock is shrinking. It can happen over many years or very suddenly.

But what options do you have when only a single chicken remains?

Temporarily keep her inside

Relocating your chicken inside the house to keep her as a pet is an excellent temporary solution while still thinking about definitive options. She'll get plenty of attention and won't be bored, but it isn't all good news, unfortunately. Chickens need outside space for free-ranging and access to forage. So keeping them inside can only be temporary. Don’t keep your chicken in a small apartment or studio without an outdoor area. They need at least one hour a day outside. Next to the spacing, chickens inside the house make a mess as they poop a lot. Make sure to potty train them or let them wear a chicken diaper.

If you're not up to the idea of keeping extra chickens, finding a new home for the leftover chicken is the best solution. Maybe she can find a new place with family or friends where you can introduce her to a new flock? If not, plenty of bird sanctuaries or farms are happy to take over your chicken.

Integrating only one chicken into an already-formed flock can be pretty tricky, but she will get accepted eventually by the new community.

Getting new chickens is the best solution if you are up to it. But there are a couple of things to keep in mind when introducing new flock members to a single chicken:

Due to various reasons, like diseases or a predator attack, you could end up with just one chicken. Chickens are sociable animals and need a flock to feel safe and healthy. Keeping three chickens is a minimum guideline, but you should never keep less than two chickens. If you're not up to buying more chickens, you should relocate the single chicken to a new flock in a sanctuary or with friends or relatives.