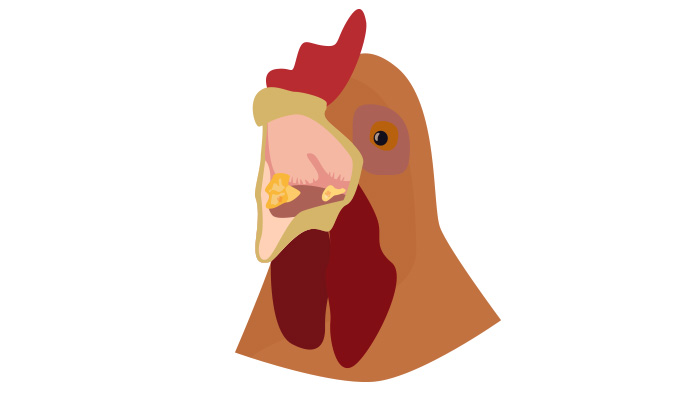 Canker in chickens is a widespread parasitic disease known for its cheesy yellowish patches in the back of a chicken's mouth. Severe strains of the parasite can cause a devastating disease. Luckily enough, there is medication available.

Let's look at canker in chickens and how to deal with it.

What is Canker in Chickens?

Canker or trichomonosis is a worldwide parasitic disease that causes canker-like sores in the back of a chicken's throat. The sores can grow so big they completely block the throat. About 80-90% of pigeons and doves carry the parasite and pass it on by drinking from the chicken's water or eating from their feed.

The parasite that causes canker is the protozoa Trichomonas gallinae, a microscopic single-celled intruder that's neither a virus nor a bacterium. The same parasite affects many wild birds, including pigeons, finches, parrots, hawks, and eagles.

The severity of the disease varies a lot with the strain of the parasite. Recovered birds may still carry the parasite but can't get reinfected.

Left untreated, the disease can be fatal. Luckily, available antibiotics already provide release after one or two days.

Symptoms of canker in chickens

The symptoms may vary depending on the strain of the parasite. The most prominent clinical signs are the sores in the back of a chicken's throat.

Symptoms of canker in chickens are:

In severe cases of trichomonosis, the sores can grow through the roof of the mouth, into the sinuses, inner ears, and even the bone at the base of the skull. These sores grow through the choanal slit, a pretty large, long opening in the roof of a chicken's mouth that connects the mouth with the nostrils.

Some people immediately think of canker when they see yellow patches in the mouth. However, a correct diagnosis can be challenging. The sores look very similar to the patches that develop after infection with the wet form of Fowlpox, Sour Crop, and other bacterial and fungal infections:

A correct diagnosis is important since the treatment depends on the disease. Only a veterinarian can make an accurate diagnosis by taking a smear of the throat for microscopic examination.

Most chickens and turkeys get infected when pigeons and doves drink from their waterer or eat from their feeders. Almost all doves and pigeons carry the parasite in their sinuses, mouth, throat, and other organs. They also pass the infection to their offspring by feeding them with milk.

Transmission inside the flock

The parasite T. Gallinae lives in the back of the throat, and chickens may carry it around for more than a year. When the chickens get sick and walk around with big sores, they can have difficulties swallowing. They sometimes pick up food and then drop it back on the ground. The food or water is then contaminated and can be picked up by other chickens.

The chicken droppings contain T. Gallinae too. Chickens can get infected by contaminated bedding, food, soil, or drinking water and develop canker symptoms.

The parasite can also spread during mating by direct contact. There is no vertical transmission from the hen to the egg.

Is canker in chickens contagious to humans?

No, canker in chickens (trichomonosis) is not contagious to humans. Canker is caused by the protozoan parasite Trichomonas gallinae, which can not infect humans. The Trichomonas variant that causes trichomoniasis, a vaginal sexually transmitted disease, is caused by Trichomonas vaginalis, a different parasite.

Canker can be treated with anti-parasitic medication such as metronidazole, with good results even after a couple of days. The drug must be added to the water or feed.

If you don't have immediate access to antiprotozoal agents, garden thyme extract (Thymus Vulgaris) can also be used for its anti-parasitic effects.

It's essential to separate the flock from wild birds and restrict access to feed and water sources. Most parasite strains are also susceptible to heat and drying out. It's a good idea to clean feeders and waterers and let them completely dry out.

The most important part of prevention is to prevent doves, pigeons, and other birds from accessing the chicken's feed and water.

Other measures you can take to avoid infections:

Birds that recover from mild strains will build up immunity to more virulent strains of the parasite.

Some sources recommend supplying apple cedar vinegar to the drinking water for its antimicrobial properties. However, there is no scientific evidence to support this recommendation in the control of canker.

The hostile T. gallinae parasites that cause trichomonosis are protozoa. These single-celled organisms look a bit like big bacteria, but they come with their own set of exotic cell structures. They are neither animals nor plants. Scientists gave them their own classification with the latest species taxonomy published in 2000.

Trichomonas have long leg-like flagella that they use to swim around in the body. The undulating membrane works as a fin. They have a flexible axostyle that starts at the base of the flagella and runs beyond the end of the cell. Scientists think the axostyle has a function in locomotion. They also have a parabasal body, a bulge, that nobody knows what it's there for.

It's no wonder the parasite still infects birds and chickens. They are dinosaurs, after all.

When a chicken ingests the parasite, it starts to replicate. Every protozoan splits in half over its length, creating two new parasites, a process which is called longitudinal fission.

The organism nests itself in the chicken's throat, crop, and stomach. It feeds upon bacteria, dead cells, and pus and is actually cleaning up the chicken's body. Mild infections can go unnoticed.

This form, where they are mobile and can attach to the body's surface, is called a trophozoite.

Virulent strains of Trichomonas also eat healthy tissue and produce their own protein debris. This triggers a response from the immune system, creating even more pus for the parasite to feed on. The result in chickens is canker with yellow patches you can see growing in the back of the mouth.

Spread of canker outside of the body

The good news is that the parasite is not so robust when it needs to survive outside the body. Other protozoa, like coccidia in coccidiosis, form a hard-shelled cyst that can survive long in dirty soil. T. gallinae, however, only forms a pseudocyst. It transitions from trophozoite to cyst, but the resulting parasite egg is not resistant at all.

The parasite can only survive a couple of hours in water and up to a day in the soil. It's also very susceptible to drying out in hot weather conditions.

Canker or trichomonosis in chickens is a global parasitic disease that causes canker-like sores in the back of a chicken's throat. The white and yellow patches are caused by the protozoa Trichomonas gallinae. A parasite that already affected bird-like dinosaurs 70 million years ago.

When the patches in the back of the throat grow too big, they can block the throat, making it difficult to drink and eat. Antiprotozoal medication can treat canker, but it can be challenging to diagnose the disease in the first place. The symptoms resemble other conditions like the wet form of Fowlpox and Sour crop. Only a vet can make a correct diagnosis.

Most pigeons and doves are carriers of the disease. To prevent canker, don't allow wild birds to eat from the chicken's feed or drink from the same water.