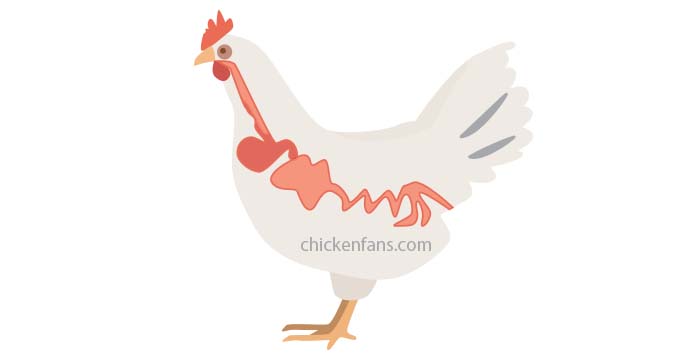 Sour Crop is a common yeast infection of a chicken's crop. Left untreated, it can be fatal for the chicken.

Every chicken keeper should understand the issues and dangers related to Sour Crop.

We'll discuss everything you need to know about Sour Crop in chickens:

Let's first understand what a chicken's crop actually is.

What is a chicken's crop?

A chicken's crop is a little pocket that buffers the food a chicken eats before it travels to the stomach. It allows the chicken to eat more than the stomach can process at once. This comes in handy when a chicken needs to eat as much as possible as quickly as possible.

Chickens don't have teeth, so they swallow their food as a whole. When they find food too large to swallow, they can only try to shake their head to break it down. After swallowing, the food passes through the food pipe and ends up in their crop.

The digestion begins with bacteria breaking down the food in the crop. When a chicken has been eating all day, you can feel the crop as a big lump on its breastbone. It can swell to the size of a tennis ball, which sometimes scares people who don't know what a chicken crop is.

The food can remain in the crop for up to 12 hours before it's passed to the chicken's stomach, typically when they sleep at night. In the morning, the crop should be empty.

What is Sour Crop in chickens?

Sour Crop in chickens, or candidiasis, is a yeast infection of the chicken's crop caused by Candida overgrowth. The responsible Candida-fungus occurs naturally in the chicken's microflora but can grow out of control due to medication, stress, improper diet, or underlying health conditions.

Although it's called a Sour Crop, the infection also attacks the surrounding organs like the mouth, food pipe, proventriculus, and even the intestines and the vent. Severe infections can be fatal for chickens, so starting treatment as soon as possible is essential.

Sour Crop can be caused by a blockage of the chicken's crop. That doesn't necessarily need to be the case, although one can lead to another. The condition where the crop is (partially) blocked is called Impacted Crop.

Symptoms of Sour Crop in chickens:

Food coming back out of the mouth is not something that generally occurs as chickens can't vomit. The foul smell is caused by food remaining too long in the crop.

It can be challenging to recognize Sour Crop in chickens from the outside. The most characteristic symptom of candidiasis is the development of white patches inside a chicken's crop, mouth, and vent area.

Candidiasis usually affects chickens coping with a weakened immune system. That's why it's common to coincide with another disease. It can be challenging to diagnose in that case as both disorders will show clinical signs.

A veterinarian can make a correct diagnosis by microscopic examination of the fungus. Candida Albicans is the most common, but other yeasts of the Candida family can cause Sour Crop too.

Sour Crop vs Canker vs Fowlpox

Patches in the mouth can also be a sign of wet Fowlpox or Canker:

Although the symptoms are similar, the treatment is different:

The causes for Sour Crop are risk factors for Candida overgrowth:

The yeast organisms usually target chickens with a weaker immune system, like baby chicks, older chickens, or chickens with an underlying condition. Sour Crop is frequently seen in chickens that live in extreme forms of confinement, overcrowded conditions, and poor hygienic circumstances.

In general, prolonged use of antibiotics, stress, and contaminated water and feed are common risk factors. The yeast is a natural inhabitant of the chicken's microflora, but some conditions stimulate overgrowth.

The treatment of Sour Crop depends on the severity:

In all cases, use of antibiotics should be stopped.

A proper diet and housing conditions can be enough for the chicken's immune system to overcome a mild infection.

You can add apple cider vinegar supplementation to the drinking water to tackle yeast infection in milder cases. You can also add probiotics to the mix. Pomegranata powder supplementation also has an inhibitory effect on Candida.

Antifungal medication is effective in treating Sour Crop. Usually, the primary treatment takes about a week, with follow-up medication spanning multiple weeks. Any water and food should be clean and decontaminated. Industrial poultry farms use chlorination techniques to ensure the drinking water is free from Candida-yeasts.

Any excessive use of antibiotics or corticosteroids should be stopped during the treatment of Sour Crop, which can interfere with the treatment of co-occurring diseases. In all cases, proper hygiene and biosecurity are vital elements for successful recovery.

In severe cases where the crop is completely blocked, a veterinarian needs to flush the crop to empty it. Flushing is risky and should only be carried out by an experienced vet.

To prevent Sour Crop you have to avoid the risk factors:

Always observe your chickens for strange behavior as it's challenging to diagnose Sour Crop. Signs like yawning, yellow diarrhea or reduced appetite should alert you.

Crop impaction or crop binding is a partial or complete blockage that results in food stuck in the chicken's crop. The crop can't be emptied overnight and still feels hard in the morning.

It's usually the result of eating something indigestible, like banana peels, plastic, straw, or long blades of grass. It can also result from an underlying condition that impacts the normal muscle movement of the crop and gullet. One such example is Marek's disease, a terrible disease that can paralyze the muscles coordinating crop contractions.

Since food remains in the crop for a prolonged time, it's a perfect breeding ground for the Candida yeast to multiplicate. That's why Impacted Crop is a common precursor of Sour Crop.

Pendulous Crop or Spastic Crop is a condition where the crop muscles are stretched out to the max, and the crop fills with food. In some cases, the muscles are so overstretched that the crop never restores to its original shape.

There are various reasons why the muscles can be damaged. It can be a fundamental defect in the crop's functioning, but sometimes it's just due to overeating and excessive drinking.

Chickens have a crop that buffers food during the day before it's passed on to their stomach. Sour Crop is an infection of the crop by Candida yeasts, a specific type of fungus. The candida yeast occurs naturally in the microflora of a chicken but can suddenly switch to overgrowth due to unfortunate circumstances in weakened chickens.

Several risk factors increase the chances of developing Sour Crop. These include inappropriate use of antibiotics, stressful confinement conditions, poor hygiene, and improper diet. Sour Crop can be challenging to diagnose and can co-occur with other diseases. One of the most characterizing clinical signals is the development of white patches in the chicken's mouth.

Sour Crop is not the same as an Impacted Crop or Pendulous Crop, which are both conditions that can overload the crop. However, both of them can result in Sour Crop eventually.