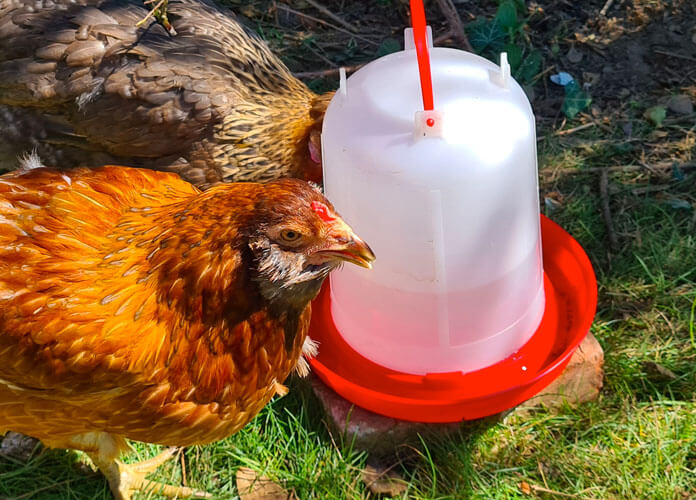 When you notice a chicken drinking an excessive amount of water, this can be a sign of an underlying condition. Unfortunately, there are a lot of conditions that can lead to increased thirst. Should you be worried?

Why does a chicken suddenly drink a lot?

However, you don't have to panic right away if you see your chicken flushing its throat. More than half of the chicken's body consists of water. It's perfectly normal if they drink more than just a few sips at times.

How much water does a chicken need?

A chicken drinks about half a liter of water a day. On hot days they can drink twice as much. They can't drink too much water.

Well, technically they can - just like us - suffer from water intoxication. But it's just not a realistic scenario that a chicken will drink so much water that its cells begin to swell and burst.

Most people don't realize chickens are drinking that much because it seems they are just taking a sip now and then. If you see them drinking like crazy, it might be a one-off case to catch up on some skipped sips.

But what if your chicken is drinking way more than usual?

Innocent reasons for drinking a lot

In some cases, it's normal behavior when a chicken tries to replenish:

Chickens need a lot of cool, clean water in summer. Ensure they have shaded areas and a well-ventilated chicken coop. During the day, their drinking water can also be too hot to drink, so they try to catch up later in the day. But even in winter, water can freeze for prolonged periods, causing dehydration.

Regardless of weather conditions, hens lower in the pecking order don't always have many chances to drink and eat. If the waterer is temporarily free, they drink whatever they can, as fast as they can.

Another reason for excessive drinking might be that the chicken is on medication or there is medication mixed in the feed. Some medicines cause the chicken to excrete a lot of urine via their droppings.

But if none of these apply, chances are the excessive drinking is caused by an underlying medical condition.

Medical reasons that cause excessive drinking

Unfortunately, excessive drinking is a symptom that can result from a broad range of health problems. But in most cases, other symptoms can help pinpoint what's going on. As always, a proper diagnosis can only be made by a vet.

Medical conditions for excessive drinking in chickens include:

Let's go over them one by one.

Chickens don't swallow food immediately to their stomach. They have a crop in their neck that buffers the food before it goes to the stomach. The crop allows them to eat more than the stomach can handle at once.

Occasionally, the crop can get fully or partially blocked, preventing food from passing through. Sometimes you can see or feel the enlarged crop filled with food.

Often the crop gets blocked when they eat undigestable food like feathers, bedding, or banana peels. Chickens will have fewer droppings and a strange smell coming from their mouth.

By drinking water, the mass in the crop gets softened. But in severe cases, crop impaction can worsen rapidly.

Fowl typhoid is relatively rare in most parts of the world. The disease is phased out in the US, Canada, Australia, and most of Europe but is still prominent in other geographic regions. The condition is notifiable to the Organisation for Animal Health (OIE). Symptoms also include pale combs, ruffled feathers, and yellow diarrhea.

Another cause of increased thirst and yellow diarrhea is blackhead disease.

Blackhead disease is a global disease caused by a protozoan parasite. The parasite piggybacks on a cecal worm in the chicken.

The diarrhea is sulfur-colored due to severe liver damage and bile excreted via the kidneys. Chickens will drink a lot to compensate.

Molds can be the source of a fungal infection called Aspergillosis. The fungus can be found anywhere, and most of us inhale the spores every day. Warm, humid weather increases the risk of growing this type of mold.

Chickens get infected by inhalation of the spores. It's common in young chicks that live in unhealthy confinement environments.

The disease comes in acute and chronic forms, and there are several manifestations possible in different parts of the body. It generally affects the chicken's respiratory system and will cause difficulty breathing and (silent) gasping.

Another symptom of acute aspergillosis can be an abnormal thirst that apparently can not be stilled with sipping water.

Other symptoms can include:

Treatment with antifungal medication can be difficult and take many months.

Water is the basis of all organic bioprocesses in the chicken's body.

The biochemical processes can be influenced by:

Toxic substances produced by fungi cause Ochratoxicosis. According to a study in 2019, up to 80% of all food and grains are contaminated with mycotoxins.

There is no actual treatment other than adding vitamins and probiotics to the diet.

This is quite common as there is a lot of zinc in circulation. A popular process to make metal corrosion-proof is to galvanize it. Galvanized metal is just steel or iron with a zinc coating. While fencing a chicken run with galvanized chicken wire, many tiny galvanized wire snippets can end up in the run. These shiny metal snippets, together with leftover bolts and screws are shiny and attract the chickens.

When the ingested zinc access the bloodstream, it damages red blood cells. Due to a series of biochemical events, the kidneys of the chicken become injured, ultimately leading to renal failure.

Chickens with zinc intoxication have foul-smelling greenish diarrhea and lose a lot of water in their droppings. The increased thirst will cause them to drink plenty of water.

When a chicken eats too salty food, its kidneys have to work overtime to get rid of the excessive salt. This causes the chicken to lose a lot of urine in their droppings, resulting in dehydration. On the other hand, low salt in the food will also increase water intake.

Unless you feed your chickens with soy sauce, salt intoxication is rare. There have been some incidents with mixed poultry feed and errors in the feed mill. Normal salt levels in poultry food should be around 0.2%, but the reported salt levels sometimes exceeded 1%.

The biochemical imbalance results in increased dehydration, increased thirst, and chickens in the flock drinking a lot of water.

Chickens don't pee as we do, they don't have a bladder, and their urine is excreted via their droppings. However, they do have a liver and kidneys that process urine in a similar way.

In the case of gout, there is kidney damage, which causes the body to build up uric acid. When the uric acid crystallizes, this can affect multiple organs and the tendons and feet of a chicken.

Drinking excessive amounts of water (polydipsia) is a typical symptom of the visceral form of gout. Kidney damage in gout can result from multiple factors, including diet, toxins, and dehydration.

When a chicken drinks excessively, it doesn't always have to be an underlying medical condition. Sometimes it's just heat or catching up on water intake.

However, there are a lot of medical conditions that could be the cause of dehydration and increased thirst.

We covered a lot of causes and other symptoms that can go with increased thirst:

Contact a veterinarian to make a correct diagnosis whenever your chickens are in severe distress.