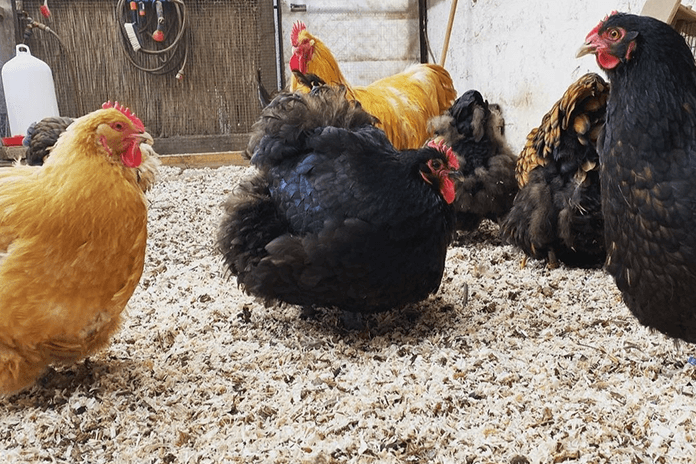 But there's an issue we need to keep in mind when using the deep litter method. When managed incorrectly, the deep coop litter method can be toxic and harmful for your chickens, so always inform yourself before starting.

Let's get down to business and start compos(t)ing!

What is Deep Litter Method?

Instead of scooping out the old droppings and bedding to replace it regularly, you repeatedly turn over the soiled bedding and add a fresh layer. That way, you allow the manure to compost inside the coop. It also provides warm and isolated bedding that keeps your flock warm during winter. The deep litter method, when done correctly, can save you loads of time and offer you rich and odor-free compost you can use as flower bedding in springtime or fall.

But there is one controversial issue we have to address. Implementing the deep litter method incorrectly inside your chicken coop may cause serious health problems to your flock. It can produce toxic ammonia gasses, bacteria, and parasites. Think carefully about whether deep litter method inside is something for you and your flock. If not, there are many other ways to provide a healthy litter program for the chicken coop.

Why use Deep Litter Method inside a Chicken Coop?

It will save you time, money, and energy. Especially during winter, cleaning out the chicken droppings can be a real chore. Depending on what type of bedding you use, you'll be cleaning out the coop up to twice a week.

But it's not all about frequency; it can be a dirty and cold job during winter. Droppings freeze to the coop floor and need to be scraped off; rain makes the bedding muddy and moist and makes this not the most pleasant task. When turning to a deep litter system, you only need to turn the soiled bedding and add a fresh layer from time to time. A thorough clean of the coop is recommended only twice a year.

To answer the central question: No, the deep litter method will not make your chicken coop smell. When executed correctly, this waste management system has multiple advantages.

As a further bonus, it makes your chickens less susceptible to diseases because of the growth of beneficial microbes inside the litter. In a nutshell, it'll make your chickens healthier, happier, and more robust. And, deep littering is cheaper than replacing the bedding every week.

Can I use Deep Litter Method in any Size Chicken Coop?

You can do deep litter in any size coop you want; however, it may not be cheaper when you have a huge coop. You'll need a very thick layer of bedding material on the chicken coop floor for deep littering to work, so maybe it won't be worth the trouble for you.

For smaller-sized coops, it works great!

Now it's time to put our money where our mouth is and start composting our chicken litter! There are three significant issues to think about before you start.

First, let's look at the type of floor inside the chicken coop, as they may vary. Whether the floor is made out of wood, concrete, plastic, or dirt doesn't matter. However, because of the wet and natural procedure of deep littering, wooden floors are more likely to rot away slowly. Therefore, always check wooden floors for wood rot before installing the new bedding or cover it with vinyl flooring before implementing the deep litter method.

Deep litter seems to work best in coops with dirt floors with microbes and moisture already available. The decomposition process starts as soon as the chickens add their droppings.

What bedding is best to use?

The best bedding materials for deep littering are carbon-based materials like pine shavings, grass clippings, and dry leaves. The finer the material is, the sooner the composting begins. Start with thicker materials such as wood shavings while adding smaller materials later. Do not use straw, as it lacks absorption and sand, as it's non-compostable.

Begin building up the deep litter, preferably in spring. When fall comes, the layers enter their warmest phase, which is comfortable for your chickens. We'll take you through the process.

Start by adding 6 inches of carbon-based material such as pine shavings inside the coop. Don't use smaller materials such as grass clippings yet; you can add them in a later stage as they tend to decompose very fast. Ensure the chicken coop is well ventilated, as ventilation is key to an excellent deep littering process!

When mixing carbon-based materials (pine shavings) and high in nitrogen materials (chicken manure), bacteria multiply inside the mixture. So, you don't have to do anything more than keep an eye on it for the first couple of days. Don't turn the chicken bedding yet, don't add more bedding. Just wait and check the ventilation inside the coop. As said before, this process needs oxygen and the chicken coop must never smell like ammonia.

Turn over the Litter

After some time, your chicken litter needs to be turned over. The main question is, how long before turning? It depends. Most of the time, your chickens do their fair share of the chore as they love to scratch their feet in the bedding, looking for food scrapings or bugs. You can even encourage them by adding grains or treats inside the coop to keep them scratching and turning the litter themselves.

But they will neglect certain areas, so you'll have to turn the litter yourself from time to time. How often? If you have a big flock (more than 15 chickens), turning it once a week is necessary. Otherwise, once every few weeks will suffice.

To turn over the litter, use a pitchfork and flip the litter upside down, so the fresh bedding comes on top. After turning, add a small amount of new bedding to encourage the chickens (again) to start scraping their feet.

As the litter decomposes, keep an eye on the moisture level, which should stay the same throughout the process. It can never be too moist or too dry. When squeezing a fistful of litter, it should never contain so much fluid that you can squeeze it out. Nor should it crumble in your hand because it's too dry.

When nitrogen-rich manure mixes with the carbon-based bedding you used, the mixture will start to break down and compost. As the litter decomposes, it decreases in depth. Add a new bedding layer to keep the depth at approximately 6 inches. This time you may choose a smaller-sized bedding material such as grass clippings or dry leaves instead, or you can add more wood shavings, whatever you prefer.

After a few months, the chicken litter turns into highly fertile compost.

In addition, chickens raised on deep litter are healthier and stronger as the byproducts of the litter process include vitamins K and B12.

When not handled correctly, the deep litter method will produce toxic ammonia gasses that endanger the welfare and health of your flock. The chicken coop should never smell foul or smell like ammonia. Decomposing litter smells earthy. If it smells, ventilate immediately and replace the deep litter with fresh bedding. If you're not up to it, there are other ways to handle chicken litter than the deep litter method.

What about DE (Diatomaceous Earth)?

Diatomaceous earth (DE) is a powder made from the sediment of fossilized algae. The skeletons of these algae, or diatoms as they're also called, are made of silica. More than 25% of the World's crust consists of silica, a sand, and natural rocks component. As the silica reacts with oxygen and water, it forms silicon dioxide, which DE is composed of.

Food grade DE, which contains less than 1% crystalline silica, is sometimes used by chicken owners inside the coop or inside dirt baths to prevent lice, mites, or parasites infestations, but its use is very controversial. Whether you want to use DE or not is up to you, but there's an important issue to consider when practicing the deep litter method.

Possible dangers of DE inside the coop or dirt bath

The dangers of using DE are not proven, nor are the benefits. It's arguably better to be safe than sorry and avoid using DE, as the long-term consequences on the chicken's respiratory system aren't clear.

Next to the possible health issues while using DE inside the coop or in a dust bath, there's a significant problem to keep in mind when using DE while practicing the deep litter method. When mixing bedding materials such as pine shavings and chicken manure, bacteria multiply inside the mixture. It takes oxygen, ventilation, and the correct moisture balance to compost. DE will dry out the litter and kill all microorganisms needed for composting, so it is not helpful while practicing the deep litter method.

How often I have to clean the coop when using deep litter method?

Twice a year will suffice.

Don't remove all litter out of the coop, but leave a few inches. The old bedding will get the new batch up and running in no time!

What's the best time of the year to clean the coop? Your choice! Most chicken keepers tend to clean the coop once in early spring, once in late summer, early fall. This way, they enjoy all the benefits of the deep litter method by making sure the litter has composed enough by winter to warm the chickens and isolate the coop. When days prolong and spring arrives, your garden enjoys a high fertile compost.