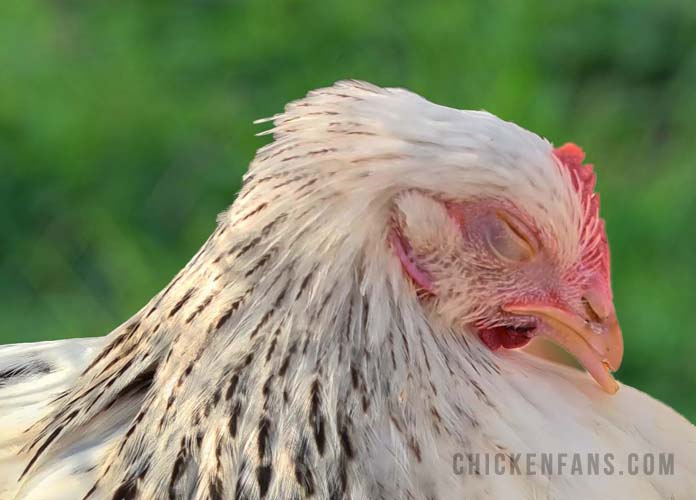 Fowl Cholera is a bacterial disease that can quickly wipe out a complete flock. Chickens can die before you even notice they get sick. Symptoms are horrific, with green diarrhea and chicken combs turning purple. Current vaccines are not able to eradicate the disease. Should you be worried?

What is Fowl Cholera?

Fowl Cholera is a widespread severe bacterial disease caused by Pasteurella Multocida bacteria. It can cause blood poisoning and chronic infections. Outbreaks have taken out entire flocks.

It targets older birds and has a preference for roosters. Fowl Cholera also affects other birds like turkeys, ducks, and canaries. That's why some call it avian cholera. The bacteria can jump on humans too.

The disease thrives in cold and wet weather conditions. Luckily there is treatment available with antibiotics.

The acute form strikes so fast that some birds die before showing any clinical symptoms. It's terrifying to walk into the coop ready for the morning chores, only to find half of the flock has been wiped out.

Signs of serious illness may only appear a few hours before death, including:

A veterinarian can notice several other severe conditions, such as vascular issues, burst blood vessels, liquid in the abdominal area, inflammation of the ovaries, and dead tissue in the liver and spleen.

In the chronic form, the bacteria infect multiple parts of the chicken's body.

These infections cause inflammation and swelling in:

The infection can also target the respiratory tract and tonsils, causing breathing problems. When the ears are infected, the infection can spread to the neck, affecting the neck muscles, which causes the head to tilt down.

A chronic infection lasts for about a month, but in some cases, it can stick for years, even with treatment.

Antibiotics can help to put an outbreak under control, but they can never completely remove the bacteria. The problem is that the infected birds will carry the bacteria for life. When treatment stops, the disease can show up again.

Medication is usually added to the water for prolonged periods to minimize the chances of the disease coming back. Common antibiotics are based on sulfadimethoxine and sulfamethazine, both part of the so-called sulfa drugs.

These sulfa drugs are highly effective in killing nasty bacteria, but they also wipe out the beneficial ones. Since sulfa drugs are so toxic, it's impossible to eat the eggs of chickens getting the additives.

Due to the complexities involved with the treatment of fowl cholera, many chicken keepers choose to completely depopulate and start over with a new and healthy flock.

The fowl cholera bacteria prefer cold and wet weather. Outbreaks are usually seen around fall and during winter.

Fowl cholera can be introduced in a flock in a couple of ways:

When the disease has entered the chicken coop, it spreads from chicken to chicken.

Vaccines against fowl cholera in chickens are available but can not completely rule out the disease. Vaccination is not always standard and is usually only applied when fowl cholera is around in the area.

There are currently two kinds of vaccines on the market:

In November 2021, researchers from Ethiopia published some promising results on developing a new vaccine. In the tests, their gamma-irradiated fowl cholera mucosal vaccine provided 100% protection against fowl cholera, compared to the 85% of the adjuvant bacterin vaccine they currently use. They reported an all-around boost in antibodies in the saliva as well as in the blood of the chickens.

Further research and testing are needed, but the preliminary findings show promising results for a new vaccine without all the drawbacks of the existing vaccines.

Can humans get Fowl Cholera?

Yes, humans can get fowl cholera. The disease is not the same as human cholera, and the symptoms are less severe for humans than for chickens. Infection typically starts with bites and scratches from dogs or cats and can spread to our eyes and throat.

In rare cases, the disease can spread to other body parts, such as the lungs or abdominal areas. Worst case, it can even reach the brain and lead to meningitis.

Apart from the infections, another complication is blood poisoning by bacteria. This is a life-threatening condition that can trigger extreme responses of our immune system, with the potential of a septic shock.

With all these potential dangers, it's essential to be highly secure and hygienic when managing sick birds.

Although they are both bacterial diseases, fowl cholera is caused by Pasteurella Multocida whereas human cholera is caused by Vibrio Cholerae. These are both gammaproteobacteria that have the same size and outlook, but these are the largest family of bacteria on earth. In essence, they are two different bacteria.

Human cholera is an infection of the intestines that causes diarrhea and dehydration. It's spread via unsafe water and undercooked seafood.

The bacteria are only infectious to humans and won't jump on animals, whereas Pasteurella Multocida can affect multiple species.

Which animals can be affected by Fowl Cholera?

Fowl Cholera is the name of the disease that develops in chickens due to the Pasteurella bacteria.

These bacteria can infect multiple animals and cause multiple diseases, with different names:

Fowl Cholera is a severe bacterial disease. In the acute form, it can kill chickens before you notice any symptoms. In the chronic form, it can stick around for years as infected birds carry the virus for life. On top of that, the bacteria are contagious to humans. That's why many chicken owners choose to depopulate and restart with a new flock.

Current vaccines based on sulfa drugs are struggling to fight the persistent bacteria. They also make it impossible to eat the eggs from chickens under treatment. New vaccine developments in 2022 are promising and might shed some light at the end of the tunnel.