Home > Breeds > Golden Comet: All You Need To Know
Breeds 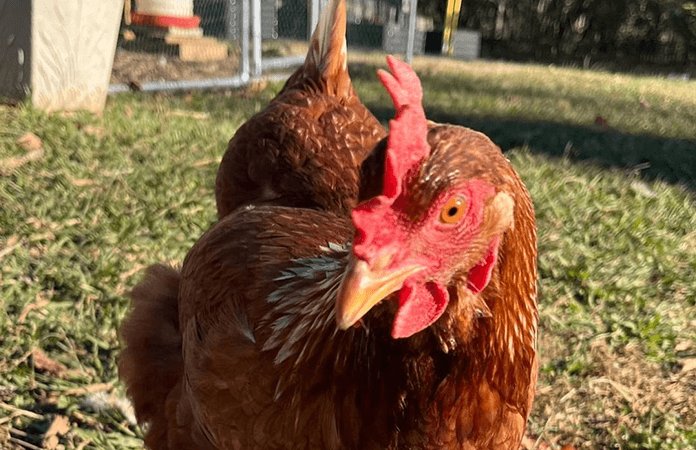 Chicken Fans is reader-supported. When you buy through our links, we may earn a commission. Learn more about our privacy policy and disclaimer.

Golden Comet chickens are extremely popular due to their excellent egg-laying skills and hardy nature. They're red sex-link chickens bred for their amazing egg production that can be color-sexed after hatching. But they have a much shorter lifespan than heritage chicken breeds, which is something to keep in mind.

Let's see what this popular breed is all about:

Only the females are brown; roosters are lighter colored, almost mainly white. The feathers of a Golden Comet hen are brown, with shades of white. Because Golden Comets are bred as an egg-laying breed, there aren't too many males to be found, as they are destroyed after hatching.

They are medium-sized chickens, not suited as meat birds because they are small in size. Hens weigh around 4 pounds (1.8 kg), and roosters tip the scale at 5 pounds (2.2 kg). Although Golden Comets are smaller in size, they lay medium to large eggs. They have a single red comb and red wattles. Their legs are unfeathered and yellow-colored.

Golden Comets are hybrid chickens, not a real chicken breed recognized by the American Poultry Association. They're bred to be hardy and good egg layers and are a crossbreed of two different breeds.

Many websites state that the Golden Comet is always a cross between two determined breeds, but that's not always true. There are more combinations possible to give a chicken the name of 'Golden Comet'.

A Golden Comet is always a cross between a red rooster and a white hen and, in many cases, a New Hampshire rooster and White Plymouth Rock, but several combinations are possible. The combination of a Rhode Island Red male and a White Leghorn female is also possible. If you're determined to know your Golden Comet's parents, make sure to ask your local breeder or hatchery.

Golden Comets are known as red sex-linked chickens. This means they're a cross between a red rooster and a white hen to produce color-sexable chicks. Day-old chicks can be sexed by the color of their dawn. Males are lighter than females and are easily recognizable.

Golden Comets are an extremely beginner-friendly chicken breed. This breed is excellent to start with if you've never owned chickens. They do not need much extra care other than water, food, and shelter and are easy to care for.

It's a healthy breed, with no special needs or requirements, besides its food intake. As Golden Comets lay many eggs in the first years, you'll need to provide quality feed that contains a minimum of 16% protein and around 4% calcium. Never feed them more than 10% of their daily food intake in snacks or table scraps. If you don't provide the necessary nutrients, they'll stop laying or lay many abnormally shaped eggs, like soft-shelled eggs.

Golden Comets are docile, friendly, and excellent with children. They're also curious and follow you in the garden when doing chores. They are not pet chickens in the sense you can keep them inside the house, like Silkies, for example, but their sweet and gentle nature makes them a great addition to any backyard flock.

Not only are Golden Comets friendly towards humans, but they get along with other breeds as well. Keeping them in a mixed flock is not a problem as they are not dominant or aggressive towards other chickens.

They can be kept in all climates, but as in all chickens, they stand cold temperatures better than hot ones. Golden Comets are hardy birds that can stand both heat and cold, but make sure to take extra precautions when extreme weather, like heatwaves, is on its way.

Golden Comets are excellent egg layers that lay around 300 eggs yearly. That's up to six eggs per week. Although Golden Comets are smaller-sized chickens, they lay medium to large eggs. Adding Golden Comets to your flock will ensure you a year-round egg supply!

They won't go broody quickly, although it can happen occasionally. This is something to remember if you're planning to hatch eggs, as Golden Comets are not likely to sit on eggs.

But keep in mind, as Golden Comets lay many eggs in their first years, the numbers will drop dramatically after two to three years. They'll stop laying or significantly decrease their egg production after only two years of age. Golden Comets also won't be likely to live longer than four years; they have a much shorter lifespan than heritage breed chickens.

Golden Comets are popular due to their ease of maintenance and great egg-laying skills. They are sturdy and hardy birds that lay around 300 medium to large eggs yearly. If you've never kept chickens before, Golden Comets are an excellent choice as they are very beginner friendly.

However, their lifespan is much shorter than heritage chicken breeds, and their egg production will significantly decrease after only two years. Most Golden Comet chickens won't get older than the age of four.