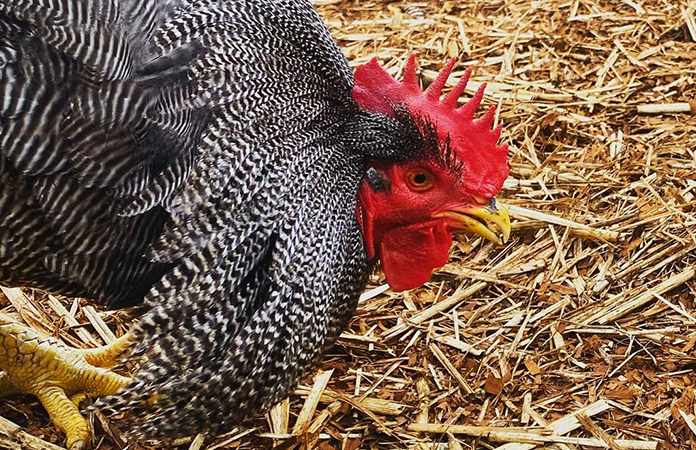 The Plymouth Rock is one of the most popular chicken breeds in the United States. There are multiple varieties, the most common one being the Barred Plymouth Rock.

The birds are popular because they're a dual-purpose breed that can be kept for eggs and meat, just like the Rhode Island Red. The Plymouth Rock is also beginner friendly, cold-hardy, and suitable for kids.

Here are some key takeaways about the Plymouth Rock

The Plymouth Rock comes in several color varieties, but they all share the same key characteristics. The birds' comb, wattles, and ear lobes are bright red. Their beak and legs are yellowish. They don't have feathers on their legs, which is one trait that sets them apart from similar-looking breeds. In general, their feathers can be fluffy, making them look bigger than they are.

Although the early standards described short-backed rocks, they now have a long, broad backs and deep breasts. A Plymouth Rock in form has a deep breast and long keel for meat production. The breast is balanced by a layer breed's deep full body cavity and pelvic area.

Sometimes non-standard varieties, such as rose and pea combed Plymouth Rocks, pop up. However, they are not part of any US, European, or Australian standards, nor are they recognized by the Poultry Club of Great Britain.

The hens tip the scale at 7,5 pounds, while the large fowl roosters are around 9,5 pounds. The Plymouth Rock is one of the smaller breeds among the heavier breeds. Pullets come in at 6 pounds, and cockerels 8.

Occasionally you see rocks with smaller chests, tiny bodies, or high tails, which are unusable for breeding. Birds that are too large can be clumsy and tend to lose the breed's character.

The Bantam Rock is a miniature version of the large fowl. The roosters come in at 36oz (3lb), and the hens weigh in at 32oz. Although they are only a third of the size of the large fowl, bantams still produce 200 to 250 brown eggs yearly. The eggs are about half to 3/4 the size of normal eggs.

The bantams don't get broody too often but will hatch their eggs, so you don't necessarily need an incubator to hatch chicks.

Plymouth Rocks are calm, tame, easy, and docile. They are friendly towards the other chickens in the flock and to humans. They follow you around in the run when you carry some food.

They can be kept as lap chickens and enjoy getting stroked, but they can be heavy for children. The roosters are usually quiet but big enough to cause problems if you are dealing with an aggressive rooster.

That said, the Rock roosters are almost always good-natured dictators. With a little bit of work, the roosters can be handled, worked around, and controlled with a minimum of fuss. They are generally much less aggressive roosters compared to, say, Leghorns. They keep the peace in the flock without being bullies.

During mating, the hens don't end up with bald patches and broken feathers; you probably won't need a chicken saddle to protect them.

The Plymouth Rock is a dual-purpose breed that lays around 200 large brown eggs annually. They start laying after four to six months. Depending on your climate, some will lay till the end of the year, during winter.

The birds are not known to go broody. That said, they are chickens, after all, and if you get them from a breeder, they might want to hatch their eggs.

The Plymouth Rock is an exhibition bird, and some strains are heavily influenced by selective breeding for type and color. These show lines sometimes produce way fewer eggs as their reproductive abilities have been jeopardized.

Plymouth Rocks are a popular breed for the dinner table, and the meat is described as tender and flavorful.

The modern broiler industry uses hybrid chicken breeds that originate from Cornish chickens and Plymouth Rocks. However, today's broiler chickens grow up in a couple of weeks. For Plymouth Rocks, it takes multiple months to achieve its market weight. This makes them less interesting for the broiler industry, as they need much more food before they are culled.

The agriculture business uses super breeds that are designed to excel in either meat or egg production. The poultry industry usually opts for specialized single-use birds. However, the Barred Plymouth Rock is still an interesting option as a hybrid. They are vigorous and easier to manage compared to other extremely specialized breeds. Since they carry the barring gene, they can be auto-sexed, and newly hatched chicks can be sorted by gender.

Even bantam Rocks are of commercial interest. Crossed with a Cornish chicken, the Plymouth bantam produces the delicate Cornish Rock Game hens sold in supermarkets.

On top of that, Rock bantams provide capes and saddles for the fly fishing industry. The Grizzly Hackle is from a Barred Rock Cock, while the Silver Penciled provides the Badger Hackle. The high-quality feathers of the Plymouth Rock bantams are in heavy demand in the fly fishing community. There are even special strains that are bred to produce quality hackles. The extremely long, lightly barbed feathers are otherwise not usually found in the exhibition or backyard strains of the Plymouth Rock.

Plymouth Rock chickens are cold-hardy chickens that do well in the winter. They have always been popular with small flock keepers since they were hardy foragers. However, they have a comb that can suffer from frostbite.

They don't really like hot summers, so they need plenty of shelter and spaces with shade. They aren't a Mediterranean breed, after all.

Many people only know the Barred Plymouth Rock or Barred Rock. The Barred Plymouth Rock carries the barring gene, which generates the pattern on its plumage. The gene turns the pigmentation depositing on and off while the feather is growing. This results in a striped pattern that gives the chicken its signature look. Since the feathers are growing slowly, the pattern is sharp with beautiful lines.

However, there exist multiple other varieties. The variations depend on the applied standard and region you are living in.

The Plymouth Rock varieties listed by the American Poultry Association are:

The Barred and White variations are the most common. The other lines are specialties, and you won't be able to get them everywhere.

The Black Plymouth Rock is only listed as a Bantam variation by the American Poultry Association. The other variations exist in large fowl as well as Bantams. Supposedly they are developed from a large fowl sport carrying a dwarf gene.

The Barred Plymouth Rock, or Barred Rock, is the most well-known and popular. It comes with white and black barred plumage. The stripes act as camouflage in shady areas.

Some breeds, like the Dominique and Malines, have a very similar look. It can be difficult to recognize the Barred Rock at quick glance for beginners.

A Barred Plymouth Rock should have a very defined barring pattern. The Dominique has a more fuzzy pattern. Dominique chickens also come with a rose comb, whereas Plymouth Rocks have a single comb with five points.

Malines also look very similar but have pale legs full of feathers. The legs of the Barred Plymouth Rock are yellow and unfeathered.

History of the Plymouth Rock

The Plymouth Rock was originally bred in America and first shown in a Boston exhibition in 1849. That's where the name was coined, but it was later described as unsuccessful. The name Plymouth Rock refers to a rock that's found on the landing site of the English Pilgrims who founded the Plymouth colony in 1620 in Massachusetts.

It was only after the civil war in 1869 that the breed gained some traction. At that time, the purebred poultry industry was getting more and more popular. Chicken keepers had been experimenting with the Mediterranean and close-feathered oriental breeds, but they wanted a new dual-purpose breed that represented their American ideals. That breed with superior economic qualities was the Plymouth Rock.

One of the original breeders was D.A. Upham of Worcester, Massachusetts. He crossed Black Cochins and Black Java chickens with a common dunghill rooster that carried a single comb and barred feathers. Via very selective breeding, he filtered out the pullets with clean yellow legs and barred feathers for further matings.

Other people like Spaulding and Drake were also busy developing the same strain, but it was Upham who stole the show in the Worcester poultry exhibition in 1869 with his creation. In 1874, the American Poultry Association included the Plymouth Rock in their first edition. At that time, the Plymouth Rock was still very different from how we know them now and looked a lot like a Dominique.

Evolution of the Characteristics

It took only six years for the breed to evolve and the Plymouth Rock was suddenly considerably fuller and longer. This evolution resulted in a new Standard description for the American Poultry Association in 1910. The new norm called for cockerels to carry their tail in a 45-degree angle, while hens should carry their tail at 40 degrees. Since that point, most features have remained roughly the same until today. Only the back-line was gradually reduced over time. The fact that this didn't change a lot says something about the accuracy of the original creators.

Since the Plymouth Rock was historically interesting as a utility breed for small flock keepers, breeding eventually developed the even-tempered, easy-to-work-with nature of the breed.

Evolution of the varieties

At first, there was only a single variety, the Barred Rock. This breed was further used to create other varieties, the first being White Plymouth Rock.

In 1884, the first White Plymouth Rocks were introduced by Frost in Maine. The strain was based on albinos but could not survive multiple generations. In 1910, other breeders succeeded in creating a white version by cross-breeding with white chicken breeds. The White Plymouth Rock were prominent members of any show and chicken farm.

In 1890, the first Buff Plymouth Rocks were shown at the Providence Poultry Show in Rhode Island. They were cross-bred using White Rocks and Rhode Island Reds. Some other breeders improved on this version by adding Buff Cochins in the mix to improve the color. The Buff Plymouth rock was recognized in 1894. The Silver Penciled variation in 1907.

In the early 1900's, the Partridge Plymouth Rocks appeared on the Madison Square Garden shows. These strains were created by introducing Partridge Cochins. At the same time, the Columbian Plymouth Rock started to appear. Multiple breeders were developing the Columbians. Some used Comubian Wyandottes and others used a combination of Dark Brahmas, Silver Gray Dorkings, and Mottled Javas.

The bantam Barred Rocks were recognized in 1940. The Blue, Buff, Columbian, Partridge, and Silver Penciled bantam chickens in 1960 and the Black variation was only added to the list in 1990.

The Plymouth Rock is a popular dual-purpose breed and an excellent egg layer. Although less interesting for the poultry industry these days, Plymouth Rock is hard for backyard poultry breeders to beat. The chickens are docile, calm, and child-friendly. The roosters are almost always good-natured. The Barred Plymouth Rock is the most popular variation, but others and bantams exist.

If you want to learn more about chicken breeds, check out our 'Chicken Breeds Page' to see every specific breed we address. Or go to our listicle breed summary on 'The Classroom', or, if you're unsure where to start, browse our 'Chicken Breeds: Ultimate Beginners Guide'.