Home > Breeds > Cinnamon Queen: All You Need To Know
Breeds

Cinnamon Queen: All You Need To Know 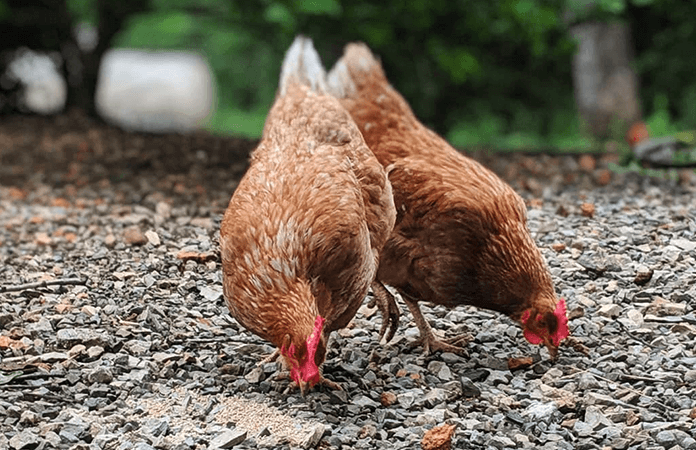 Cinnamon Queen chickens not only have a lovely name, but it's also an amazingly hardy breed and gain popularity each day! It's a highly beginner-friendly breed that's easy to care for and tolerates both heat and cold.

Let's see what this relatively new breed is all about.

We'll start by addressing the most important characteristics.

A Cinnamon Queen is a recent sex-linked hybrid breed. It's gaining popularity because of its attractive name, ease of maintenance, and hardiness.

Cinnamons are a mix of two well-known chicken breeds, the Rhode Island Red and Silver Laced Wyandotte, where the RIR is the rooster and Wyandotte the hen. The result is a reddish-brown female and a white male, so their sex can be told immediately after hatching. The name 'Cinnamon Queen' finds its origin in the cinnamon-colored hens.

The breed is quite large and heavy, being a dual-purpose breed bred for meat and eggs. Roosters weigh approximately 7.5 pounds (3.5 kg), and hens are tipping the scale at 5.5 pounds (2.5 kg). They're larger than many egg-laying breeds, but there are far more giant breeds available, so it's clear there are far better choices than a Cinnamon Queen as a table bird.

Cinnamon queens have a single red comb, red wattles, and earlobes. Their shanks and toes are yellow and clean. There is no Bantam or miniature version available of the Cinnamon Queen.

The Cinnamon Queen is a sex-linked chicken, and the color of the down reveals the chick's gender. The colors of female and male birds are very different. A rooster is white; a hen is a darker red-brown color.

Sex-linked chickens are hybrid birds, meaning crossbreeds of heritage or purebred chickens. This makes it easy to determine the sex of a day-old hatchling, which is interesting for hatcheries.

As mentioned before, the Cinnamon Queen is a hybrid bird not recognized as a heritage breed by the American Poultry Association. So it can't be used as a show bird to enter pageants or poultry shows.

Cinnamon Queens are bred for their egg-laying capability, so they'll need extra care in food intake. They need a lot of protein and calcium to produce that many large eggs. If you only let them free range, or you don't provide them with enough nutrients, they will stop laying.

The name 'Cinnamon Queen' is a marketed retail name; it's catchy and cute but has nothing to do with the breed itself, except for the color reference, nor is it a registered trademark.

Overall, Cinnamon Queens are known to be friendly and kind birds, but the roosters can be a bit feisty. Cinnamons are the offspring of Rhode Island Reds and Wyandottes, both social birds but a more assertive breed.

They won't be aggressive but are mostly on top of the pecking order. It's better to place Cinnamon Queens with other friendly but assertive breeds, such as Plymouth Rock or Vorwerk.

It's possible to keep the Cinnamon Queen in every climate. They are sturdy and hardy birds and can stand cold and warm weather better than most breeds. They need extra care, like any other backyard pet, during extreme weather. Provide plenty of shelter, food, and water, and check on them regularly.

Cinnamons are good egg layers and lay between 250 and 300 large brown eggs annually. They'll start laying at only 16 to 18 weeks old and keep laying during the winter. Egg production only stops during molting.

There is, however, a downside to it. Because they lay so many eggs in the first years, their egg production stops or profoundly decreases after only three to four years. They also seem to have a shorter lifespan than other hybrid breeds, and many won't live longer than four years.

Cinnamon Queens occasionally go broody. They're excellent mothers and are suited birds if you're thinking about hatching eggs.

The Queens need a lot of protein and calcium to produce these large amounts of eggs. Provide quality feed with a minimum of 16% protein and never feed them more than 10% of their daily food intake in snacks or table scraps. If you only let them free range, or you don't provide them with enough nutrients, they will stop laying.

Cinnamon Queens chickens are a fantastic cross between a Rhode Island Red rooster and a Silver Laced Wyandotte hen. They are bred for their hardiness and egg-laying skills, and that's exactly what you get!

Cinnamons lay up to 300 large brown eggs in the first years of their life, but production slows down after three to four years. Many won't live longer than four years. Due to their amazing egg production, they need extra calcium and protein in their diet.

At what age do Cinnamon Queens start laying?

Cinnamon Queen hens start laying at only 16 to 18 weeks old and can lay up to 300 eggs per year. Their egg production will stop or profoundly decrease after three to four years.

Yes. Cinnamon Queen hens are excellent egg layers in the first years of their life. They lay up to 6 eggs per week; that's 300 eggs yearly! After three years, their egg production will slow down.

Are Cinnamon Queens easy to take care of?

Yes. They are low-maintenance and need little extra care besides food, water, and shelter. Cinnamon Queens are also very hardy birds and thrive in hot and cold weather, so they can be kept in every climate.

What eggs do Cinnamon Queens lay?

Cinnamons lay brown eggs, and all eggs are large in size.