Hedemora Chicken: All About This Swedish Chicken Breed 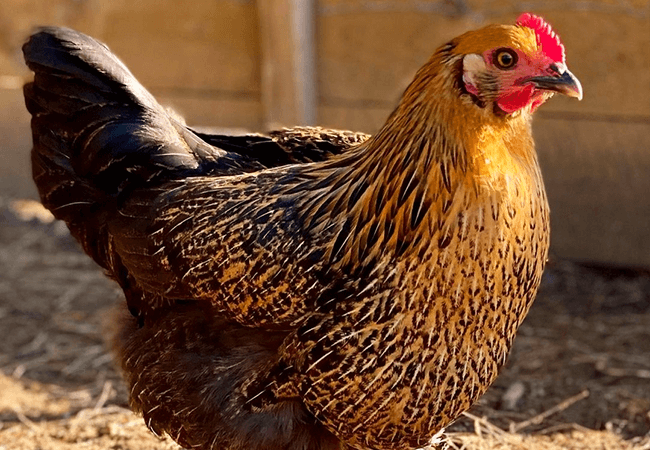 The Hedemora is a rare Swedish chicken breed and a great addition to any backyard flock. They're docile and good egg layers, laying up to 150 eggs yearly. The breed is also believed to be the world's hardiest breed. Let's find out more about this Swedish beauty.

There are no breed standards for the Hedemora chicken, so it's harder to pinpoint their exact characteristics. We can divide the Hedemora chicken into three categories based on their appearance: Woolly Silkie feathered, feather-legged and clean-legged.

Feather-legged and clean-legged Hedemora chickens, the name speaks for itself, have eighter feathered or clean shanks and toes. Woolly Silkie feathered Hedemora chickens have fluffy feathering, looking like the feathers of a Silkie chicken. This fur-like plumage helps them to isolate their bodies during harsh, cold winters and protects them from the chilly wind.

The Hedemora is a small-sized chicken, slightly larger than a Bantam, although it's a large fowl. Roosters weigh around 5 pounds (2.3 kg), and hens 4 pounds (1.8 kg). Their skin is often black, and comb and wattles are primarily red and relatively small to prevent frostbite.

They are a land breed, meaning they were not bred to look the way they look, but their appearance is simply the result of years of evolution to fit their environment. Because the Hedemora originates in the Swedish town of Hedemora, in central Sweden, they had to evolve to stand the extreme cold, snowy and harsh winters.

Their extreme cold hardiness is shown in their small body, black skin (to absorb any sunlight), small comb and wattles, and fluffy feathering. The breed is believed to be the most cold-hardy chicken worldwide.

This breed finds its origin in Hedemora, Sweden. This small town is located in central Sweden and lies by altitude north of Alberta, Canada. It's believed the Hedemora chickens arrived here around 500 years ago and outstandingly evolved themselves to stand the cold Swedish winters.

The region around Hedemora has a freezing, snowy, and windy climate with long winters. A lot different from the tropical environment where the first chickens, junglefowl, originated. Needless to say, this breed has come a long way from adapting itself to its living area,

The Hedemora breed is not recognized by the American Poultry Association and is known as a land breed. It wasn't bred to look the way it does today, but its characteristics result from years and years of evolution. Hedemora chickens don't all look alike; there are various colors and feather types.

Hedemora chickens were introduced to the US by Green Fire Farms, a non-commercial hatchery known for its commitment to preserving rare chicken breeds. To this day, you can purchase one-day-old Hedemora chicks at the GFF hatchery, and there is a handful of other breeders worldwide selling chicks and fertilized eggs. Prices of (unsexed) day-old chicks are around $30-$50 per chick.

Hedemora chickens are a dual-purpose breed, meaning they can be kept for both meat and egg production. But since it's a small breed, most chicken keepers only have Hedemora chickens for the love of the breed and their eggs.

Hens lay around 150 eggs annually, all tinted in color and medium-sized. The hens are good sitters and can go broody regularly. Almost half of all Hedemora hens sit on their eggs when allowed. This broodiness makes them excellent mothers, and the breed is known to take good care of their chicks. But if you're not planning on hatching eggs, this is something to keep in mind.

During broodiness, hens stop laying eggs. If you don't want them to stay on the eggs, you must take them off the nest frequently to stop them from brooding.

Since the Hedemora chicken is exceptionally cold-hardy, it'll keep on laying during colder winter months. It is, however, possible that egg production will slow down to increase when spring arrives.

Hedemora chickens are calm and docile, and easy to care for. As they are believed to be the hardiest chicken breed in the world, they are pretty beginner-friendly and can even be kept in harsh environments. You'll notice that Hedemora chickens don't have any trouble foraging through snowy landscapes, while other breeds prefer to stay in the run.

They're a healthy breed that isn't susceptible to diseases and doesn't need much extra care other than food, water, and shelter.

Their cold-hardiness also means they're less tolerant of heat waves or warm temperatures. The Hedemora chicken is not the best breed to be kept in tropical or hot environments. They'll suffer from heat stress that can eventually be followed by a heat stroke, which can be fatal. Always look after your flock when hot weather is on its way, as they'll need extra care.

A Hedemora chicken is an excellent addition to your backyard flock, as it's a rare breed but does not need much extra care. You can easily keep them with other breeds; they'll get along with most other chickens and are friendly towards flock members.

Originating in Hedemora, Sweden, the Hedemora chicken is believed to be the hardiest chicken breed in the world. They're low in maintenance, extremely cold-hardy, and friendly. The hens are decent egg layers, laying up to 150 tinted eggs annually.

They don't stand hot temperatures that well, so the Hedemora chicken is not the best breed to keep when living in a tropical environment.

What is a Hedemora chicken?

A Hedemora is an old Swedish land breed that adapted over time to stand Sweden's harsh, cold winters. The breed is believed to be the most cold-hardy chicken worldwide.

How many eggs do Hedemora chickens lay?

Hedemora chickens lay up to 150 eggs yearly, up to 3 per week. All eggs are tinted and medium-sized.

How much are Hedemora chickens?

A Hedemora chicken is more expensive because there are only a handful of breeders worldwide. Unsexed day-old chicks are sold for around $30-$50 each.

Is a Hedemora chicken rare?

Yes. The breed was almost extinct in the 1970s but was rescued in time. At this moment, a couple of thousand Hedemora chickens live worldwide.