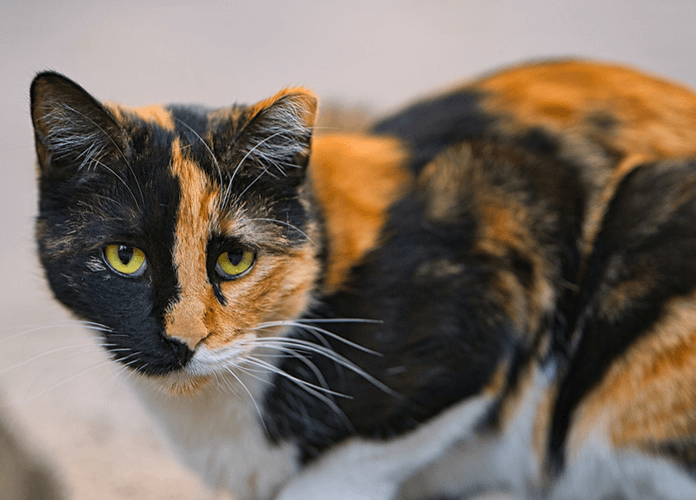 Feral cats are no ordinary house cats. They are unsocialized and undomesticated outdoor cats that aren't used to human contact and therefore are also called wild cats. As feral cats are wild animals, they could endanger your flock. But can a feral cat kill and eat chickens?

What are feral cats?

Feral cats are wild outdoor cats that usually live in groups. They were never domesticated and therefore are not used to human contact. Wild cats are seldomly seen during the day as they hide during the daytime and search for food at night. They hunt for their food and search for small animals like lizards, birds, or mice as they are wild animals.

A feral cat is a wild animal and finds human contact stressful, so domesticating a feral cat is nearly impossible. But you can try to make them more friendly when you have the time and preferably with the help of an expert. But it has to be done at a young age, as adult wild cats can't be tamed.

It's not very common for wild cats to hunt backyard chickens for food. Feral Cats hunt for food but prefer smaller animals weighing less than 3.5 o.z. (100 gr). Typical prey animals for wild cats are small rabbits, mice, birds, and rats. A full-grown chicken is too big for cats to bother with, and both hens and roosters can be pretty feisty when defending themselves. But cases have been reported of feral cats killing animals weighing more than 8.8 pounds (4 kg), so it can happen!

This is a different story for baby chicks as they lack the size and capability to defend themselves. Chicks are an easy target for feral, stray, or house cats, so always be careful and place the brooder in a safe location, away from all other pets and possible predators.

Overall, feral cats will prefer a much smaller animal over an adult chicken at any time, but cases of cats attacking a chicken have been reported. Ensure you secure your chicken run and coop properly to keep any predators outside.

Most people live in urban neighborhoods and never come eye to eye with a feral cat. Stray cats, however, are widespread in urban environments. They are not to be compared with wild cats, as stray cats are domesticated cats who appear to have no owner. Most stray cats are friendly or become friendly after you give them food.

Feral cats can be the offspring of stray cats, as their kittens lack the socialization period making them used to humans. Controlling the wild cat population is therefore very difficult and time-consuming. Simply removing the feral cats is not a long-term solution. Catching and neutering stray or feral cats is the best long-term option to reduce their population.

How to secure the chicken coop for predators?

It's nearly impossible to make your chicken run and coop 100% predator-proof, but you can make it harder for the predators to get in!

Firstly, you'll need to secure the chicken run, the outside area where your chickens hang out during the daytime. Please ensure the fencing is high enough, and bury the bottom of the fence in a 12-inch deep trench, so predators can't get under it. Install hardware cloth around the fence to keep small animals such as weasels and rats out. Cover the run to prevent predators such as hawks from flying toward your chickens. You can also install a predator-repellant system, an automated alarm system with motion sensors to scare predators away.

To keep your chickens safe when roosting, ensure they go inside the coop at night. Use hardware cloth to secure windows or gaps in the coop. Close the coop door every night so no predator can come in. When you're not up to the task, you can buy an automatic chicken coop door that opens and closes at sunrise and sunset.

Feral cats are not likely to kill and eat your backyard chickens as they prefer smaller animals such as mice and birds. But cases of attacks have been reported, so it can happen. However, small chickens like baby chicks or silkies and bantams are more likely to be attacked by any feral, stray, or domesticated cat. Please secure your chicken run and coop to prevent predators from attacking your chickens.